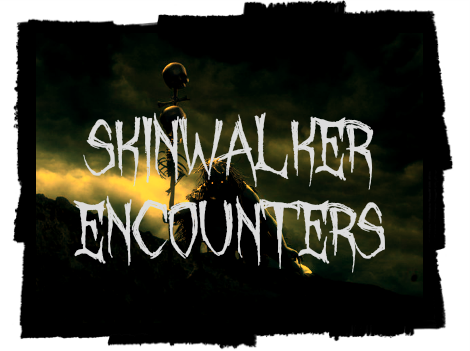 Several years ago, I posted a series of first-hand 'skinwalker' accounts. I've recently received requests for information on this phenomenon...so I've decided to post some of the original series and add a few more experiences along the way:

"....the one I saw was an hour or so before sundown. Just about the ugliest thing I ever seen in my life. Dark colors - like quilt patchwork. The eyes were hollow, tail just flapping around. Ran like a monkey but shaped like a dog. My elders told me that the evil ones avoid people with guns. In earlier days the bad people would walk on our roof to try and scare us."

"...all of the sudden we heard the dog barking at what seemed to be a flute playing in the distance. My grandma didnt seemed brothered but I started to freak and my little brother was scared too. About an hour later, as me and my brother had just dosed off, we heard a knock on the door. I was happy since I thought it was my parents, so I got up quickly and started to run to the door. As I was running my grandma yelled for me to get away from the door. I froze...she had never yelled at me like that. She yelled at the door in Navajo, "who's there?" ....there was no answer. She yelled at it again. This time the knock on the door got louder and more rapid. My grandma sat back down on her chair and yelled, "go away we dont want you here...leave us alone." The knocks grew to pounding this time. My little brother and I sat down by my grandma. The dogs began to bark loudly and then there was thumping on the roof as if someone was walking on top of the house. The person was still at the door. All of the sudden at the window nearest to the door a black figure appeared but it did not have the outline of a human. It began pounding the door and tried to force the door knob. This continued for over a half hour while my brother and I cried in fear. My grandma, who still seemed not bothered by this, began to sing in Navajo. Then suddenly, dead silence. We sat there frozen in fear, listening to see if it was just waiting. In the side windows we saw car headlights. It was my parents and older brother...the beast had fled."

"My friend and I were talking when all of a sudden we heard the screen door open and slam shut. We thought it was my dad. While that happen, my mom claims she heard footsteps go through her room toward the restroom. She also thought it was my dad, but soon realized that she was unable to move as if she were paralyzed.

Still in my room with my friend, we soon heard the screen door open and slam again...this time louder. It had woken my dad up and he came to my bedroom to check on us and see if we were still there. I assured him we were not into mischief.

My mom told us the next morning about what she heard, and how she could not move. She also told us that the second time the door slammed she then heard horse hooves run by her bedroom window."

"...suddenly all the dogs started barking and we all went outside to see what was going on. They were barking to something in the trees. We heard the trees rustle but there was no wind. Soon we heard this weird sound and then it got quiet again. We stayed outside for at least another 30 min but then back inside and went to sleep. In the morning we noticed our chicken and hens pen gates were open and all our chickens and hens were out. We all walked around looking for them and couldn't find any. We went to the where we heard the noise last night and found these weird unknown footprints. It led us to the outhouse...but that was all we found. We told my Grandma what happened and she blessed us and told us that was a skinwalker. From that day on we still hear weird stuff but we pray and go outside and yell in Navajo "go away and bother someone else."

"...I was all alone in the hogan and got up to use the restroom. I heard something outside so I went outside to go check what it was. I noticed a dark figure so i grabbed my gun and shot at it. Nothing happened. Then suddenly it ran at me as I turned and ran back to the hogan. I said a prayed in Dine (Navajo)....then something was banging on the door. Within seconds the door broke down and I ran to the back of the hogan praying still. The next thing I remember was that it was morning and I was in bed...the gun still in my hands."

"My family never mentioned Skinwalkers or witches to me so I knew nothing about them. My grandpa died a few years ago so my parents sent me to live with my Grandma to help her around her ranch. I brought my cat along. Well just after two weeks of living there my cat went missing. I figured that he would come back but he never did. I called him and looked for him but nothing. So I went to go put some hay behind the barn for the horses when I saw my orange cat's remains. I thought maybe something attacked him like a coyote so I picked it up and I saw that there were no bones just skin and the outside of his fur there was red and yellow even white paint on the outside of him. I couldn't figure out what it was.

I buried him behind a hill with a little stone with his name carved on it...I was so heart broken. My grandma said she could get me a new cat but I didn't want a new cat. Pretty soon enough I kept hearing meows outside the hogan and scratches at the door. My grandma doesn't have any other cats so I would open the door and find nothing. Then one day, I went to go check on my cat's grave and dig it up to make sure he was still there. He was gone...but his bones were there. I just couldn't believe it! Why were his bones there? I thought I buried his skin? Ever since I have lived there I have experienced some of the strangest things in my life. I don't want to go back. I can't even share what kind of crazy things happened to me because from there I drew the line. I was confused and scared about these people but at the same time I knew I was one of these people. I have a greater respect for the Navajo people which is why I don't think getting involved with Skinwalkers is a good idea, Just don't mess with them and they wont mess with you."

"Sixty years ago, when I was young, I knew these two men that were cousins. They tried to become Skinwalkers by drinking the blood of the firstborn son. They both were firstborn sons so they drank each others blood. One cousin's name was Troy, who became an eagle and the other was Cody who became a wolf. Troy was good and helped people while Cody killed people. They had an argument one night and decided to gather six other people and have one on one battles to decide who was right and who was wrong. Finally the last battle was Troy vs. Cody one-on-one. Troy tried with all his might to fight Cody off, but it just wouldn't work. Cody was too strong. Troy possessed tonfa while Coy believed in just pure strength. Cody transformed into his wolf form and hurt Troy very badly. Troy then revealed his secret power. His skinwalker power let him create eagle feathers anywhere. He surrounded his tonfa in eagle feathers and his tonfa became very powerful. Troy defeated Cody and Cody's evil tyrany was over. Now still today, Cody and Troy walk amongst us disguised as humans...but they are Skinwalkers."

NOTE: Cautious Navajo will not speak openly about Skinwalkers, especially with strangers, because to do so might invite the attention of an evil witch. After all, a stranger who asks questions about Skinwalkers just might be one himself, looking for his next victim...Lon

Lost on Skinwalker Ranch: The True Story of a Property Guard and His Encounter with the Paranormal