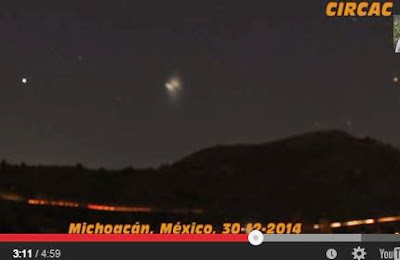 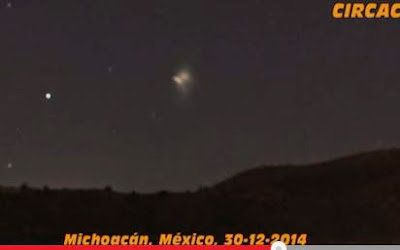 This glowing light was seen 'taking off' from a mountain in Mexico.

First thoughts were that it might be a helicopter, or perhaps even a large drone but both of those seem a little odd considering it is quite literally, a ball of light. 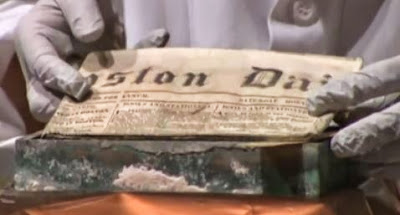 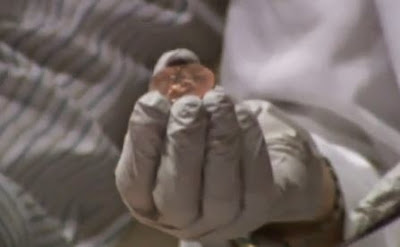 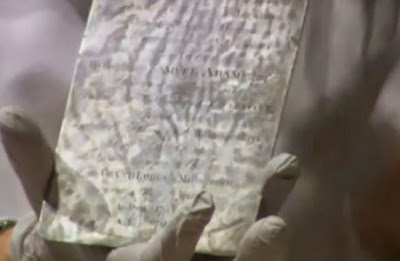 BOSTON (AP) — Early residents of Boston valued a robust press as much as their history and currency if the contents of a time capsule dating back to the years just after the Revolutionary War are any guide.

When conservators at the Museum of Fine Arts, Boston gingerly removed items from the box Tuesday, they found five tightly folded newspapers, a medal depicting George Washington, a silver plaque, two dozen coins, including one dating to 1655, and the seal of the Commonwealth of Massachusetts.

While some of the coins appeared corroded, other items were in good condition and fingerprints could be seen on the silver plaque.

The capsule was embedded in a cornerstone of the Massachusetts Statehouse when construction began in 1795. It was placed there by Revolutionary era luminaries including Paul Revere and Samuel Adams, governor of Massachusetts at the time.

The contents were shifted to what was believed to be a copper box in 1855 and placed back into the foundation of Statehouse. The box remained there until it was rediscovered last year during an ongoing water filtration project at the building. The box was actually brass, according to conservators.

The oldest coin in the box was a 1652 "Pine Tree Schilling," made at a time when the colony didn't have royal authority to create its own currency. Pine trees were a valuable commodity at the time. The trees were used as ship masts.

Michael Comeau, executive director of the Massachusetts Archives and Commonwealth Museum, said he has seen the coins offered for as much at $75,000, although given the context of this particular coin and the association with Paul Revere and Samuel Adams, the value would likely be much higher.

The newspapers were folded in such a way that the names of the publications weren't always visible, but one might have been a copy of the Boston Evening Traveller — a newspaper operation that was eventually absorbed into the current Boston Herald.

A portion of one of the papers that was visible showed a listing of the arrivals of whalers from various ports to Boston. Conservators didn't try to unfold the papers.

Pam Hatchfield, the head of objects conservation for the museum, removed each item using a slew of tools including her grandfather's dental tool. Hatchfield said the paper in the box was in "amazingly good condition."

Massachusetts state Secretary William Galvin said he expects the items will be on display at the museum for a period of time, but that eventually they will again be returned to the foundation to be discovered by a future generation of Bay State residents.

Galvin said he didn't know if modern items might be added to the foundation.

Comeau said the objects in the box are a bridge back in time.

GELA, SICILY—Thirty-nine ingots of cast metal have been recovered from a ship that sank 2,600 years ago off the southern coast of Sicily. “The wreck dates to the first half of the sixth century. It was found about 1,000 feet from Gela’s coast at a depth of ten feet,” Sicily’s superintendent of the Sea Office told Discovery News. The metal is being called orichalcum, a legendary metal that the fourth-century B.C. Greek philosopher Plato attributed to the mythical island of Atlantis. “Nothing similar has ever been found. We knew orichalcum from ancient texts and a few ornamental objects,” Tusa added. Analysis of the metal shows that it is an alloy made of copper, zinc, and small percentages of nickel, lead, and iron. The ingots were most likely destined for workshops in Gela. “It will provide us with precious information on Sicily’s most ancient economic history,” Tusa said of the shipwreck’s precious cargo. - Archaeology

Sisters Charged With Murder Of Brother

In an unthinkable homicide case, a Florida teen and her younger sister have been charged in the shooting death of their older brother.

"Anytime you come on scene with something this horrific, where you have juveniles or children involved, it's pretty unsettling, even to seasoned law enforcement and deputies," Columbia County Sheriff Mark Hunter said at a Tuesday press conference.

According to Columbia County Sheriff's spokesman Murray Smith, the investigation into the case began Monday night. Police in White Springs, a small town 70 miles northwest of Jacksonville, learned that the girls had run away from home and were spotted at a nearby Dollar General store.

When approached by police, the sisters "informed [an officer] of a shooting at their residence," Smith said.

Sheriff's office deputies were dispatched to the Kornegay's White Springs home, whereupon they found the body of the girl's 16-year-old brother, Damien Kornegay, sprawled out on the living room floor. He had been shot one time and was pronounced dead at the scene, police said.

"Based on the preliminary investigation, it is believed that earlier in the evening the 15-year-old sister of the deceased retrieved a handgun from their parents' bedroom and used it to shoot her brother," said Smith.

Nicole Kornegay's role in the shooting remains unclear. Smith would only say that she "assisted her 15-year-old sister" in the commission of the crime.

The Huffington Post normally does not identify minors charged in connection with a crime, but both girls have been widely identified in news coverage, and their names have been released by the sheriff's office.

Bayoubuzz.com reported Ariel Kornegay told police that her brother beat her up the day of the shooting. Authorities have yet to officially comment on a possible motive.

According to News4jax.com, police had been called to the Kornegay residence in 2010, in regard to a report of "inappropriate behavior" that had allegedly involved Damien and Ariel Kornegay. Details of that alleged incident remain unclear and no charges were filed, the news station reported.

Keith and Misty Kornegay's 3-year-old child, who was found alone in the home upon the discovery of Damien's body, has been placed in the custody of the Florida Department of Children and Families.

The children's parents were reportedly out of town at the time of the shooting. The neglect charges were filed against them for "failing to properly supervise the children," Smith said.

Ariel and Nicole Kornegay are being held without bond in the Columbia County Detention Facility. Both girls are expected to make their first court appearance sometime Wednesday.

"This is a very unusual event for us here in the community -- very tragic," Sheriff Hunter said. - THP

The superstitions of space travel revealed

6 Signs Your Spirit Guide Is Here

Ghost Wars: The Secret History of the CIA, Afghanistan, and Bin Laden, from the Soviet Invasion to September 10, 2001 (Penguin Books)

ESP WARS: East and West: An Account of the Military Use of Psychic Espionage As Narrated by the Key Russian and American Players