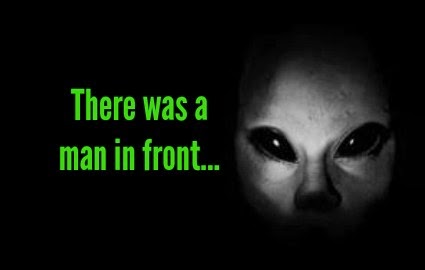 Seat Pleasant, Maryland - August 1952 - 21:30 - After hearing a buzzing sound, Mrs Suzanne E. Knight looked out and saw something like an airplane fuselage, dull silver in color and with some thin white smoke coming out the rear end. On a small mast at the front was a small red light. Through a row of large square windows could be seen, brilliantly yellow lighted, something like cabinets with slanted tops, and, in the front, a helmeted man looking straight ahead. No controls or instruments were visible. Beneath the fuselage was a windowed gondola, showing the backs of little seats. After trying in vain to get the newspaper on the phone, she looked again; the man was gone, and so was the “observation car.” Then the lights went out, and the object began to glow red, as if red hot, and to rock from side to side. She called her relatives, but it was gone by the time she returned to the window: 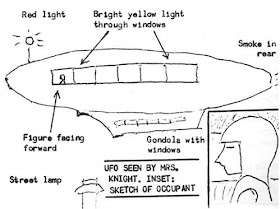 Sometime in August, 1952 (the exact date cannot be recalled) during the major UFO sighting wave of that year, Mrs. Suzanne E. Knight, a young housewife and mother in Seat Pleasant, Maryland (4 miles east of Washington, DC), saw a UFO at close range with what appeared to be an occupant aboard.

At about 9:30 p.m. on that hot summer evening, Mrs. Knight was in her kitchen when she heard a peculiar "bzzt" noise, apparently against the screen of the kitchen window. The noise was repeated several times and thinking it was a large insect, she went to the window and looked out. She saw a bright object descending rapidly at a 45 degree angle and thought it was a plane about to crash; instead, the object came to a hovering position at a right angle to her, approximately half a city block away and about 300 feet above the ground.

The UFO appeared to Mrs. Knight to resemble the wingless fuselage of a plane and was dull silver in color. Something similar to smoke was coming from the rear. The side of the object facing Mrs. Knight was lined with a number of square windows through which a brilliant yellow light was shining. On top and to the front of the object, to her left, was a small red light, extended somewhat above the body.

On the underside of the UFO was an undercarriage similar to the gondola of a dirigible; this also contained a row of smaller, square windows and was brilliantly aglow inside with yellow light. Mrs. Knight thought she observed what appeared to be rows of seats, similar to theatre seats, in this lower portion. Through the upper windows she was able to see what appeared to be a row of cabinets with slanted tops.

"There was a man in front," Mrs. Knight wrote in her report to NICAP, "looking straight ahead towards the front [to her left]. I couldn't understand what he was looking at so intently, and not moving either. I expected to see a lot of instruments or dials, etc. similar to instrument panels on airplanes, but there were none that I could see." She said that the bright yellow glow in the object made everything inside look yellow, "even the man." This occupant wore a kind of helmet and "around his arm and the side of his helmet, next to his face, there seemed to be a shadow or a dark line." 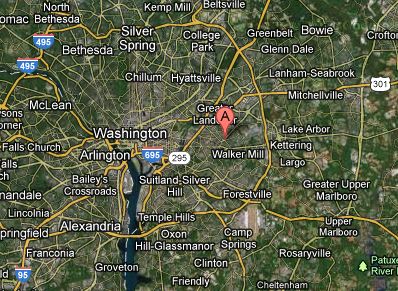 After watching for a minute or so, Mrs. Knight left the window to phone the newspaper, but she was unable to get an answer. When she returned to the window, the object was still there but the man had disappeared and the undercarriage was no longer visible.

"I thought maybe it had moved up into the fuselage, because not even an outline of the car was visible, but it should have been because the street light would have shown it."

At that point the lights in the object were abruptly extinguished and the UFO turned from a dull silver color to a glowing red, "like the door of an old pot-bellied stove." It also began to rock toward and away from the witness and gave the appearance of being "wavy, like water running over a rock or like heat waves coming out of an electric toaster." She then began calling for someone else in the house to come and see the object but while she was looking for her sister the object departed. Altogether, the incident had lasted approximately three minutes, at least two minutes of which Mrs. Knight had had the object in clear view.

The witness told her sister of what she had seen, omitting the detail about the occupant (she was certain her sister would disbelieve her); the sister displayed disinterest and a certain degree of skepticism, so Mrs. Knight ceased to talk of it. She forgot the incident until a number of years later, when she told her husband and children. The report came to the attention of NICAP and Mrs. Knight made out a full report in September, 1967. Following this, she has been interviewed further by a member of the Capital Area NICAP Subcommittee. Mrs. Knight holds a responsible job in Prince Georges County. - NICAP - National Investigations Committee on Aerial Phenomenon

UFOs, ETs, and Alien Abductions: A Scientist Looks at the Evidence

Authors of the Impossible: The Paranormal and the Sacred