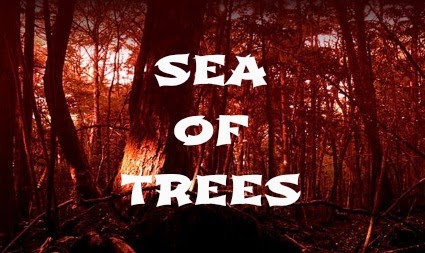 “The thought of suicide is a powerful solace: by means of it one gets through many a bad night” - Friedrich Nietzsche

It’s perhaps the most obvious setting for a horror movie imaginable — and it’s real. And incredibly grim. There is a thick, in places nearly impenetrable forest around Mt. Fuji, and it’s the most popular place for suicide in Japan. It’s the second most popular spot in the world behind the Golden Gate Bridge. From Vice, who sent a video crew there:

The Aokigahara Forest is the most popular site for suicides in Japan. After the novel The Black Forest

was published, in which a young lover commits suicide in the forest, people started taking their own lives there at a rate of 50 to 100 deaths a year. The site holds so many bodies that the Yakuza pays homeless people to sneak into the forest and rob the corpses. The authorities sweep for bodies only on an annual basis, as the forest sits at the base of Mt. Fuji and is too dense to patrol more frequently.

If you’re sensitive, you might want to skip this fascinating but hugely morbid video. VBS.tv’s crew follows a geologist through the forest, and they find a number of grisly surprises. 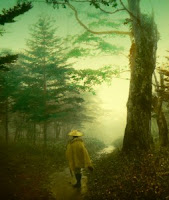 CNN - Aokigahara Forest is known for two things in Japan: breathtaking views of Mount Fuji and suicides. Also called the Sea of Trees, this destination for the desperate is a place where the suicidal disappear, often never to be found in the dense forest.

Taro, a 46-year-old man fired from his job at an iron manufacturing company, hoped to fade into the blackness. "My will to live disappeared," said Taro. "I'd lost my identity, so I didn't want to live on this earth. That's why I went there."

Taro, who did not want to be identified fully, was swimming in debt and had been evicted from his company apartment.

Taro bought a one-way ticket to the forest, west of Tokyo, Japan. When he got there, he slashed his wrists, though the cut wasn't enough to kill him quickly.

He started to wander, he said. He collapsed after days and lay in the bushes, nearly dead from dehydration, starvation and frostbite. He would lose his toes on his right foot from the frostbite. But he didn't lose his life, because a hiker stumbled upon his nearly dead body and raised the alarm.

Taro's story is just one of hundreds logged at Aokigahara Forest every year, a place known throughout Japan as the "suicide forest." The area is home to the highest number of suicides in the entire country.

Japan's suicide rate, already one of the world's highest, has increased with the economic downturn.

The Japanese government said suicide rates are a priority and pledged to cut the number of suicides by more than 20 percent by 2016. It plans to improve suicide awareness in schools and workplaces. But officials fear the toll will rise with unemployment and bankruptcies, matching suicide spikes in earlier tough economic times.

"Unemployment is leading to this," said Toyoki Yoshida, a suicide and credit counselor.

"Society and the government need to establish immediate countermeasures to prevent suicides. There should be more places where they can come and seek help."

Yoshida and his fellow volunteer, Norio Sawaguchi, posted signs in Aokigahara Forest urging suicidal visitors to call their organization, a credit counseling service. Both men say Japanese society too often turns a cold shoulder to the unemployed and bankrupt, and breeds a culture where suicide is still seen as an honorable option.

Local authorities, saying they are the last resort to stop people from killing themselves in the forest, have posted security cameras at the entrances of the forest.

The goal, said Imasa Watanabe of the Yamanashi Prefectural Government is to track the people who walk into the forest. Watanabe fears more suicidal visitors will arrive in the coming weeks.

"Especially in March, the end of the fiscal year, more suicidal people will come here because of the bad economy," he said. "It's my dream to stop suicides in this forest, but to be honest, it would be difficult to prevent all the cases here."

One year after his suicide attempt, Taro is volunteering with the credit counseling agency that helped him get back on his feet. He's still living in a shelter and looking for a job. He's ashamed, he said, that he still thinks about suicide.

"I try not to think about it, but I can't say never. For now, the will to live is stronger."

"To run away from trouble is a form of cowardice and, while it is true that the suicide braves death, he does it not for some noble object but to escape some ill." - Aristotle

The World's Most Haunted Places, Revised Edition: From the Secret Files of Ghostvillage.com