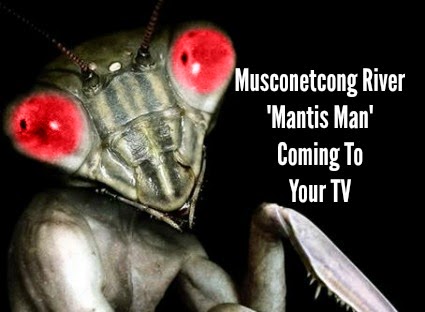 As some of my readers know, I'm going to be part of another segment on 'Monsters and Mysteries in America' this upcoming 3rd season. The subject this time will be 'Mantis Man & Insectoids'...specifically, the encounters on the Musconetcong River near Hackettstown, NJ. I have reported the past two years. The first two encounter descriptions can be found at The Musconetcong River 'Mantis Man' Returns. The night before filming, I was made aware of other sighting that will be included in the segment. The following information describes those sightings and comes from the production notes. The names will not be disclosed until the TV segment is presented:

In 2003, while staying in her mother’s home in Hackettstown, SM and her husband experienced a series of bizarre events – events that she claims have now begun to finally make sense with more recently reported sightings of the Mantis Man, which were posted on a local internet message board.

SM is a Hackettstown native: This is really weird. We were staying at my Mom’s house from May 2003 to August 2003. Behind her backyard is a big fish hatchery for the Musconetcong River. There’s a fence at the end of the yard, then the hatchery. We have a clear view of it. The river is only 1 block away.

SM: We had been noticing weird noises and strange lights from back there. There are no lights on at night back there in the hatchery normally so it’s very dark. We’d see red lights – like beams from a laser pointer. They’d be there and then they’d be gone. Sometimes we’d see them like a pair of red eyes, and sometimes those eyes would be looking into this one window in the back of the house. You’d have to be at least 6 or 7 feet tall to see in that window. And the noises were really strange – they were like bursts of walkie-talkie static. It was like some kind of military-esque garbled talk, in short bursts. We’d hear that often too but couldn’t figure out where it was coming from, other than the hatchery. My sister had stayed there before and said she had heard the same thing. It was really strange.

Then came the night of August 3, where the weirdness ramped up to a level that led to SM and her husband moving out of the house altogether.

SM: On the night of August 3, just me and my husband were in the house. We started seeing what looked like people running through the backyard, but the people were very tall. We would see something running away towards the fish hatchery and another time you’d see something running back away from the windows after seeing those red lights like eyes shining in. There were lots of the red lights and those noises that sounded like they were coming from a radio. Whatever we saw was very tall.

Terrified and confused by what was going on behind their home, SM called the police.

SM: About midnight, we called the police and they came out. They looked around with flashlights. They didn't see anything. There were 1 or 2 cars, about 4 officers but they didn't take it seriously. My son remembers how upset I was. After they left it continued on like before.

Frustrated and scared, SM decided to bravely take a look for herself.

SM: It was momentarily quiet and I went out to look with my husband. I approached the perimeter of the yard by the fish hatchery and it sounded like…well, we started hearing actual voices – weird voices - saying “thank you, thank you”, coming from back in the fish hatchery but we didn't see anyone saying it. I was so scared that I started running back to the house. But I got this weird feeling like it, whatever it was, was thanking me for acknowledging it existed. We stayed up all night, scared to death. When the morning came on August 4, we went back outside to look around. We saw actual footprints in the soft mud in the backyard. They weren’t human footprints but they weren’t animal either – one or two tracks leading up to the window where we would see the lights. They were deep prints, almost like if you had a very thick woman’s high-heeled shoe that would stick into the ground while you were walking. The outlines were almost like a fork, they were deep like it was heavy, and there were a lot of them in an area. We were so freaked out by the experience that we packed up and moved out that day, and moved to Florida shortly after for a few years.

The footprints she described seem very mantis-like. Then there are the weird high frequency radio-like sounds – was that the way the human brain is interpreting the oral communication of a 7-foot tall insect – like the song of a giant cicada?

NOTE: This is going to be a continuing subject for research. Butch Witkowski (UFORCOP) has showed interest in this case as well. Your encounter reports and sightings related to the paranormal & cryptids are always welcomed. Thanks...Lon