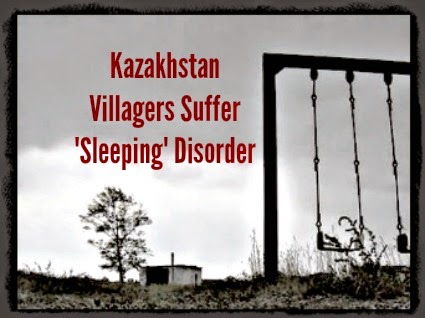 Every tenth villager of Kazakhstan's Kalachi has unexpectedly fallen asleep in broad daylight – some unable to wake up for several days. Despite numerous attempts to find the cause of the inexplicable disorder, the Sleepy Hollow riddle remains unsolved.

Over 600 residents of Kalachi village in Kazakhstan's north may have never read Washington Irving's 'Legend of Sleepy Hollow,' or watched the popular American TV series or film – but they refer to their homeland as "Sleepy Hollow," as everyone there is scared of an indiscriminate illness that has no cure.

People in Kalachi have been suffering from the "sleep epidemic" – as they call it – for the past couple of years. Everyone in the village has a family member or a friend who's fallen asleep for no apparent reason, with over 100 people having experienced it by now – some more than once – according to locals.

In one of the recent cases, children started falling down on the first day of school in September, with eight kids falling asleep within one hour. Before that, 20 people fainted and slept for several days, and "at least 60 at once in the winter...we laid them in rows," an ambulance worker told RTD, which traveled to the area to undertake its own investigation.

Groups of scientists and medics – including virologists, radiologists, and toxicologists – have visited the village to address the issue. Still, the causes and consequences of the sleepy condition remain unknown, leaving those affected to fear that they might one day simply not wake up.

"If you try to wake him, it seems he wants to open his eyes – but can't. He's sleeping and sleeping..." Igor Samusenko, father of a child who is suffering from the illness, told RTD. People have also described further symptoms, including hallucinations (one boy was picking snails off himself), memory loss, dizziness, and nausea.

"I'm weak, my legs feel heavy, as if I'm wearing a hundred pairs of boots, and my head is spinning," one woman told RTD. Other patients behave "like they're drunk." It's difficult to warn others and ask for help, as "your tongue gets twisted."

Doctors say that "some people [have] slept for the whole week.”

People suffering from the sleeping sickness are diagnosed with various diseases. While children are being cured from toxic encephalopathy, a brain malfunction, adults are said to have suffered strokes. But after several days in intensive care, they're back to normal life – until they feel abnormally sleepy again. Some doctors say that mass psychosis is to blame.

Many believe the extreme sleepiness is caused by the wind blowing from a mine near Kalachi. In Soviet times, the village was deemed top secret due to uranium mining. The mine closed over two decades ago, and the area is now partly abandoned. What used to be a prosperous neighborhood is now left in ruins.

Neither residents nor medics blame radiation for the sleepy anomaly.

"People worked in mines for so many years, and no one fell asleep," former miners say.

No symptoms of sleepiness have been described in studies of various forms of radiation disease, doctors say.

While radiation levels in the town and at the mine closest to it are at a normal 16 micro-roentgen per hour, the RTD team's dose rate meter showed an alarming 268 micro-roentgen per hour at an abandoned filled-in shaft mine further from the village. An independent analysis of Kalachi's water, soil, and vegetation samples did not identify anything abnormal. - RT

Dr. Mutter's Marvels: A True Tale of Intrigue and Innovation at the Dawn of Modern Medicine

Strange Medicine: A Shocking History of Real Medical Practices Through the Ages

The Book of the Bizarre: Freaky Facts and Strange Stories

A Cabinet of Medical Curiosities: A Compendium of the Odd, the Bizarre, and the Unexpected