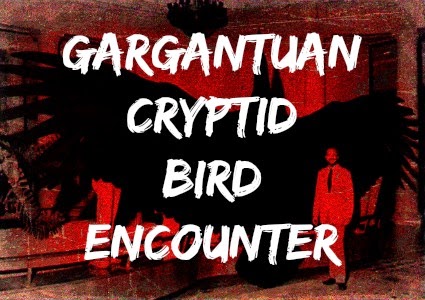 I received the following report today:

Sir - this is my written statement that you requested after our telephone conversation today.

On Monday Dec 15th at 6:45 PM (dark) I is was traveling on the Airport Rd near the New Kent Co. Airport. This section of road went by the New Kent trash collection center. The road is bordered by woods on both sides.

As I approached this location, I noticed something large and dark on the road very near the trash collection lot. I hit my brakes and came within 50 ft of what appeared to be a huge bird. Like I told you on the telephone, when I say huge, I mean something of unbelievable size. First of all, it had the overall shape of an eagle. It definitely had talons which were lighter in color. It also had beak which seemed too large and long for it's face. The overall color was dark, I'd say black. The height was at least 8 ft, probably more as it bobbed up and down. It may have been eating something when I approached it.

It's head moved toward the direction of my car and made a grunting sound. It turned away from me and the long tail with feathers swung around in my direction. The wings, which extended across the road, unfurled as it lifted off the surface. The wings were massive, but like I said reached past the width of the road. I told you 25 ft on the telephone, I still believe that is a correct estimate.

I searched 'monster birds' and found your telephone number and email. I looked at different images of eagles and hawks online but there was nothing that closely resembled this bird. Thanks for talking to me. JD

NOTE: I received the phone call from JD early this afternoon, then I requested he write a report and forward. After I finished talking to JD I went to Google in order to find the location. I then realized that the location was within a few miles of a large bird sighting in May 2013 - Huge Bird Sighting - New Kent Co., Virginia. The descriptions were different in most respects...but both were of birds of enormous size. The entire area seems to have a lot of wetlands & swamps.

During our phone conversation, JD mentioned that the bird had something in it's talons. He said he got a brief look as it started to fly away, but mentioned that 'legs were dangling from one side.' He didn't say human and didn't want to include it in the written report. I'm only mentioning it since it was in his original statement.

I brought up the subject of Pterosaurs to JD, but he said it definitely had feathers. Could this have been a Thunderbird? I was somewhat taken aback by the size description...8+ ft high and wingspan of 25 ft. This is bigger than any other Thunderbird-type sighting I've ever received. What are your thoughts? Lon