Daily 2 Cents: What the Hell was that...? -- Evil Spirits, Ghosts Seen In Official's Office -- Woman Claims Demons Made Her Stab Friend 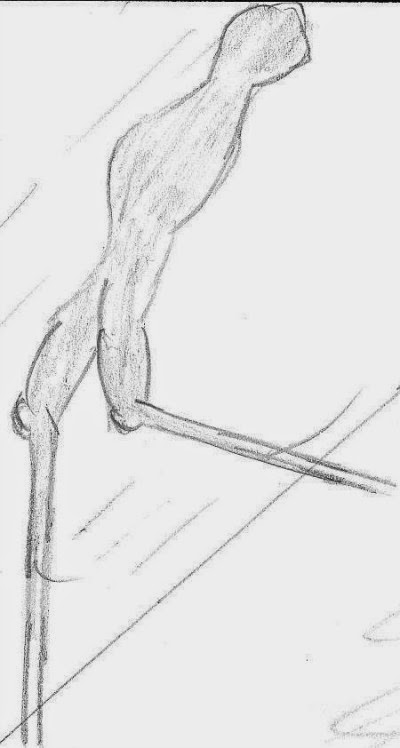 This was forwarded to me by my colleague David Garrison:

Last night we were on our way home about midnight (12/13/2014). We made it to Carmel Rd (Our Washburn Rd, comes off Carmel Rd) in Hillsboro, Ohio. Robert drove round the curve and as we topped the hill, I was texting looking at my phone and I heard him say "What the hell was that??" I said "What?" He said "Something just ran in front of me and I don't know what it was." I looked at him and even in the darkness could see he had turned a shade of white. To sum it up, he explained to me what it looked like. Very tall, skinny for the most part except it's legs, asphalt gray, no jawline, no arms that he could see and it's legs were bent backwards as it ran. He isn't a believer, or never was. He always said, I don't believe in anything until I see it. Well, he's seen a UFO, he see's the circle in our yard and now he's seen an alien.

I told him to draw it before he couldn't remember it anymore.

This is his drawing of what he saw.

The angle you see it, (right) was the way it was running.

He isn't the type to lie and he wouldn't risk looking stupid. He is a 60 year old Marine.

Vice President Emmerson Mnangagwa’s Secretary Catherine Magaya who was attacked by a cyanide-like substance in her boss’ office on Wednesday, has spoken out on her ordeals in her closet work environment.

Mrs Magaya said she has had many bizarre encounters inside her boss’ office one in which a large rock fell from the roof and almost killed her.

“Just a few weeks ago, a rock fell from nowhere to land on chef’s desk, missing my head by just an inch,” she said.

Magaya quoted by the State Media said there was another incident when she twisted her neck after going into a trance “soon after opening Cde Mnangagwa’s office.”

Commented outspoken MDC-T cadre Job Sikhala, “Of bizarre happenings and mysterious twisting of necks and stones falling from nowhere. If you ask our elders and traditionalists they will tell you that there is a spiritual anger from someone murdered who will give you hell lot if sleepless nights and torment you until confession. My suspicion is that necks are being twisted by Gen Solomon Mujuru and is throwing stones from nowhere.” - ZimEye 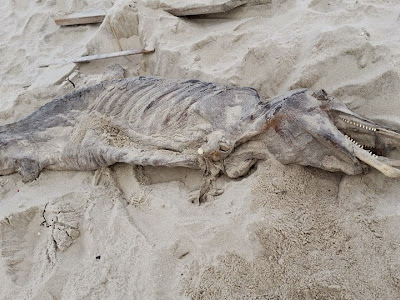 The skeletal frame of a mysterious creature appeared on a Toms River beach Wednesday just after the nor’easter hit the area this week.

The animal was photographed by Denise Wirth of Lavallette, who snapped pictures of the animal after friends told her about it.

“It looked like something prehistoric,” she said, noting that it was found in a neighborhood known as ”North Lavallette.” “You don’t usually see something wash up like this.”

Gregg Sakowicz, a Rutgers University research professor, wrote on his “Professor Sak” website that the animal appears to be a “bottlenose dolphin.”

Wirth, noting that the Marine Mammal Stranding Center has been notified, said she assumes the animal was buried first, and was unearthed after big waves pounded the shoreline.

Even in this age of reason and sciectific technology, supernaturalism doesn’t stop catching the imagination of humans. People get thoroughly spooked and esperience eerie enocunters now and then. Consider model Katie Price’s case as she believes her and Kieran Hayler’s home is haunted.

The 36-year-old model, whose house is on renovation currently, said she wants to call in a medium as she and Hayler keep hearing unusual sounds and smelling strange scents, reported Contactmusic.

“Kieran keeps smelling cigarettes and I Googled it and spirits normally smell of smoke and flowers. I am getting a medium in. Because we’re knocking things down, we’re disturbing the spirits. I am 100 per cent sure there’s a ghost,” she said. - Asian Age

Woman Claims Demons Made Her Stab Friend, Accused of Assault

A downstate woman claims a demon possessed her when she stabbed her friend in the neck in Cheboygan County (Michigan).

Police say she attacked the victim in the middle of the night on Sunday at a home on Freedom Road in Mackinaw Township.

Torri Harris is charged with assault.

Police say Harris claimed she felt possessed by a demon and needed to perform an exorcism on the home, and that the demon forced her to stab a 21-year-old man.

The man was cut on the right side of his head behind his ear.

He was treated for his injuries and will be okay. - 9and10 News

7 Children Who Were Raised By Animals

Not such a big beast! Newly discovered Government files reveal six-month investigation to prove 'monster' that stalked moors near Bodmin was actually just a cat