Reported on 12/9/2014 - Are these craft or bio-forms? The UFO had lights, but transparent...could this be related to the Manta Ray shaped entities I've report on over the years? Lon

Joshua, Texas - 10/24/2012 - Not sure of the exact date, but it was getting cold in the weather. And it was in 2012 during the big shooting stars show close to winter. Those clues could narrow the date down to one who knows how to search for such. I was watching for the shooting stars when above me I saw a strange dark basketball sized cloud hovering and flying in an arc like path. I called my wife and two kids out to see it. Over the course of 3-4 hours we saw multiple ufos larger in size some were triangle shaped a few looked like a giant eagle. They glided overhead at different speeds. Then when we thought it was all over, just over a nearby tree top a giant light blue almost transparent stingray shape was just hovering there with pulsing white blue lights. It had to be over 500 ft long. Then it was just gone. After that searchlights like a light house in the distance was circling. Off in the western horizon. When the ufos would glide by we lost sight of them easily because they blended in with the night sky so well. My step daughter was scared at the time but the rest of us were exited at what we were seeing. This all happened over a year ago so I'm sure I've forgotten some of it. Then a little over a month ago me and my son were just looking up and we happened to see two really fast dark clouds fly by. They were actually pyramidish shape and also made no noise. Then they to blended with the night sky. They moved north to south. - MUFON CMS

Note that he said “the first” pilot. He’s referring to “The Cage,” written by show creator Gene Roddenberry and directed by Robert Butler, which was presented to — and rejected by — NBC more than a year before the series finally debuted in 1966. Despite being turned down by the network, and featuring a cast almost entirely different from the show fans would come to love later, “The Cage” actually made it to air as part of the first season of Star Trek, with scenes edited into a two-part story titled “The Menagerie” that aired Nov. 17 and 24, 1966.

Although “The Cage” was rejected on grounds of being “too slow” and “too intellectual [with] not enough action,” NBC wasn’t ready to say no to the series just yet, asking Roddenberry to rework the concept and create a second pilot. In the process of reworking, he dropped the entire cast with the exception of Nimoy and brought in William Shatner as the new captain of the Starship Enterprise. A legend was about to be born.

As Star Trek gained popularity, the original version of “The Cage” became popular in its own right; it was screened at fan conventions before being released on home video in 1986 as part of the show’s 20th anniversary celebrations. It wasn’t until 1988 that it finally aired on television, as part of a franchise retrospective titled The Star Trek Saga: From One Generation to the Next.

The official 50th anniversary of Star Trek is 2016 — Sept. 8, 2016, to be exact — but the roots of the entire mythology have already reached their half-century mark. Happy birthday, Captain Christopher Pike, Number One and Dr. Boyce. In some mirror universe somewhere, you went as boldly as Kirk, Spock and Bones, and for just as long. - Hollywood Reporter

A new study has indicated that there is a scientific basis for the parting of a large body of water.

The miraculous parting of the Red Sea that enabled the Israelites to escape from Egypt is one of the best known biblical stories, a tale that has even made its way on to the silver screen both in the Charlton Heston classic The Ten Commandments and more recently in Ridley Scott's Exodus: Gods and Kings.

But did these events actually occur - did Moses really part the waters of the Red Sea ? As it turns out there is a scientific basis to support the idea that something like this could happen.

In a recent study, software engineer Carl Drews created a computer model to demonstrate that a phenomenon known as "wind setdown" might be the key to explaining what happened.

Under certain conditions it is possible for strong winds to produce a significant enough storm surge in one area of a lake for another part to be completely emptied of water. This peculiar occurance has actually happened quite recently both in Lake Erie and in the Nile Delta.

Drews maintains that, based on archaeological evidence, the events described in the story actually took place at the Lake of Tanis in the Eastern Nile Delta, not the Red Sea as is commonly told.

Using the model he was able to show that the conditions at the time were favorable and that the lake could have parted in this way at the time Moses and the Israelites were escaping Egypt. Read more at Smithsonian Magazine 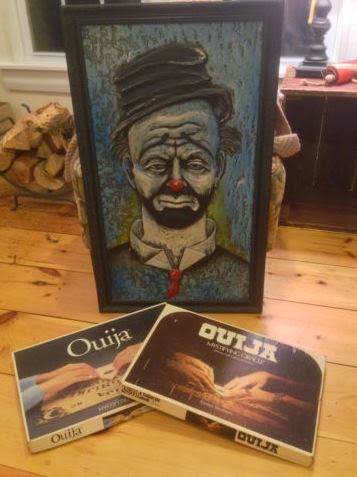 A reader forwarded the following:

The Clown Painting and two Ouija Boards were discovered together in the basement of a home purchased eight years ago in the Rocky Mountains. What started as exciting occurrences ultimately turned into frightening experiences over time. I have never been the type to blame others (especially inanimate objects) for complications in my life but have since foreclosed on the house and have moved numerous times. These items have gone from the Pacific to the Atlantic seaboards bringing with them the same exasperation and malaise. As advised by certain individuals who have helped my family come to terms with the events that have occurred in our lives, I will not go into specifics or details. I am trying to sell these items in order to make up for the financial hardships we have endured. These items will NOT be sold individually for fear that breaking them up will do more damage than good. Please respect these requests.

The Sacred Trees Of World Mythology

The Occult Origin of Christmas

Faking History on the Internet #2: Fairies Dug Up in Ireland!

A New Hope: Is This What the Last Three Star Wars Films Were Missing?

The Templars: The History and the Myth: From Solomon's Temple to the Freemasons

The Tree of Life: An Illustrated Study in Magic

The Essential Enochian Grimoire: An Introduction to Angel Magick from Dr. John Dee to the Golden Dawn