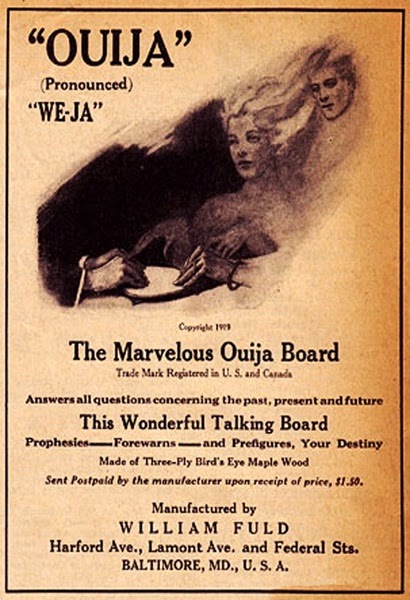 Exorcists and paranormal investigators are urging people not to buy the occult board game Ouija as gifts unless they want to invite demonic forces into their homes this Christmas.

The warning comes as Google predicted that the modern version of the Victorian-era 'spirit boards' will be a sell-out this Christmas.

The search engine company has confirmed the game, purportedly used to contact the dead through spelled-out messages, is one of the top trending gifts on its price comparison list this year following the release of the Ouija horror film last month.

While critics largely panned the film as cliched and horror-free, a Catholic priest based in Dublin who specialises in the occult, warned that messing around with the real thing can be horrifying,

"It's easy to open up evil spirits but it's very hard to get rid of them," the Vincentian priest and exorcist, who spoke on condition of anonymity, told the Sunday Independent.

"People, especially young people and teenagers who are likely to experiment with Ouija boards on a whim, can be very naive in thinking that they are only contacting the departed souls of loved-ones when they attempt to communicate with the dead using the boards.

"It's like going to some parts of Africa and saying I'm personally immune to Ebola. But it does leave people open to all kinds of spiritual dangers. People don't intend any spiritual harm by it, but we live in a spiritual realm and you have no way to control what may impinge on you."

The exorcist said evil spirits, and even demons, will masquerade as departed loved ones as a means of gaining possession and, as a result, "people don't realise they can get infected".

Darren Ansell, one of the three-member team of paranormal investigators based in the North known as Paranormal Study and Investigation (PSI), said he personally "wouldn't touch an Ouija board with a barge pole". He told the Sunday Independent: "I've had too many scares over the years."

Some of PSI's controlled experiments on groups using Ouija boards confirmed subconscious muscular movement responsible for answering questions put to the board. But he has also interviewed many board users - all of whom have reported very negative experiences during or after the sessions.

"I've witnessed tables walking down the hall on their own with just fingertips touching them," he said. - Independent 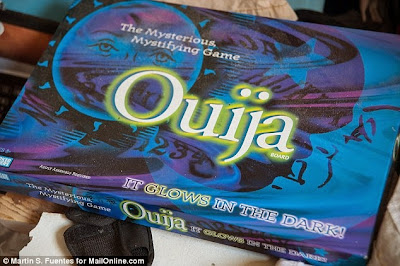 Douglas, WY - 10/27/2012: I was driving across the roads of Wyoming in order to think about killing myself. I was driving across the Thunder Basin National Grassland as a place to kill myself because I've suffered major depressive disorder and bipolar disorder since I was a teenager. Anyway, I left my car after I had parked along side of the road to go a quiet place to shoot myself with a hand gun that I brought from Wal-Mart. I walked a mile or two away from my car then I found a quiet place to shoot myself, a quiet place three miles away from my car. I'd sat down on the ground of the grassland, ready to shoot myself, when, suddenly, I saw a black helicopter chasing something across the sunrise sky. At first, I thought it was a secret Arab attack that the Government had found out about, but then, I realize that wasn't true, anymore. When the object got closer to me, I saw that the object was in the shape of a cross with a dome and some windows on it. Suddenly, the idea of killing myself quietly was, somehow, gone. As the object kept coming closer to me, I saw something shocking. It may me realize that this cross had pulsating colors of light with some strange sounds and noises coming from the object. Also, I saw human beings inside the cross, except, their skin color was magenta and, yet, they somehow had black hair. All of them had black hair and magenta skin, which frighten me to the core. I don't know how I know that, but it felt true to me. I looked at my digital watch, it didn't work at all. It was completely dead. Suddenly, the object and the black helicopter that was chasing the object had disappeared. I looked at my digital watch, again, it had been over two hours since I been here in the grassland. I soon ran three miles back to my car and drive the hell away from here. Six hours after the ordeal, I began to feel sick, so I went to a hospital. Once there, I had a doctor told me that traces of arsenic was found in me. They found some form of red-violet blood-like substance in me that had arsenic in it. I told him about the ordeal, then he'd called an insane asylum and, then, had me taken away. I was there for a year before being release. After that, I went back home and tried to return to a normal life, but I couldn't. It was because of the nightmares that I had. Nightmares about tall human-like beings with magenta skin and black hair with, what appeared to me, to be a red-violet blood-like substance being injected to me by a needle-like object. Also, I had nightmares about three others with me in, what appeared to me, as some waiting room of a hospital. Nightmares of these tall magenta-skinned human beings studying me and the other three with strange medical equipment such as a laser of sorts, and, that red-violet blood-like substances in some blood bags, which made me realize this is the color of their blood. That, plus, when I had a nightmare, I began to feel sick, again. I went to my doctor, and, she had me tested and stuff. When, I was done, my doctor came back and told me that I had arsenic in my systems. That, wasn't all she found, she had also told me that they had found a, what appeared to be, a bio-chip in the shape of a pentagon in the front of my neck, which also explained, why, my voice had been froggy since my ordeal. They implanted a implant in me, for what, I don't know. To this day, I still have these nightmares, and, I can't stop getting sick from arsenic because the implant will kill me by, what my doctor said, will cause a fatal electric shock to my heart. Tell, others, about my ordeal. Also, I found out that those three others were from the black helicopter. - MUFON CMS

'Explosions' and 'loud bangs' are heard across UK

In some areas the booms, which occurred between 10pm and 10.30pm, were so loud that they shook windows and left many people scared and confused.

Some took to social media sites to speculate over what might have happened with suggestions ranging from a meteorite explosion to the sonic boom of a passing aircraft. The Ministry of Defence however has denied that any jets had been scrambled over the country at the time the noises were heard.

A loud explosion was also picked up near Catterick, Britain's largest army base, at 3am on the same night. Police carried out a full investigation but couldn't find anything to explain it.

The incidents follow another loud bang that was heard over Manchester earlier in the week. Fire crews conducted a detailed search but were unable to locate the source of the explosion. Read more at Mirror

Two people called police on Thanksgiving Day to report a monkey on the loose.

The callers said they saw it near Tampa's Lowry Park Zoo — first in a yard, and then running along Sligh Avenue. But the zoo told police it wasn't one of theirs.

"The monkey was described as being approx 3 ft tall, brown and fast," Tampa police wrote on the agency's Facebook page.

"There is no probable cause for this monkey's arrest, however, we will work tirelessly to apprehend him," police wrote. "If anyone has any information on the monkey's whereabouts or has future sightings, please call the Tampa Police Department at 813-231-6130."

An anonymous report to police had the monkey hanging around Hiawatha Street east of Armenia Avenue. Most neighbors contacted Friday by the Tampa Bay Times were skeptical about the sighting, though some conceded a monkey might have taken up residence amidst the neighborhood's lake-front homes, given the scores of fruit trees in some back yards.

"We have bananas and there are some orange trees nearby," said Anais Ochoa, 14, who lives on the 2100 block of Hiawatha.

She said she's hoping the reports are true, so she could see the monkey.

"I wouldn't approach it. I wouldn't want it to jump on me," she said.

Police have visited the neighborhood and warned Hiawatha residents not to approach the animal if they see it.

Kathy Rivitt, 45, who also lives on the 2100 block of Hiawatha, said the monkey tale raced through the neighborhood once police showed up Thursday.

While she's skeptical, she said she catches herself scanning trees in her yard and nearby, wondering whether the monkey is up there.

"I told my daughter we won't be feeding him," she said.

The most famous mystery monkey of Tampa Bay — named Cornelius — began making headlines in 2009. The male rhesus macaque had been spotted throughout the bay area, repeatedly evading efforts of wildlife experts to capture him.

Some believed he had been forced out of a colony of monkeys in Silver Springs, near Ocala.

His run from captivity came to an end on Oct. 24, 2012, when he was shot with a tranquilizer dart in a St. Petersburg neighborhood near Lake Maggiore, about three weeks after he had bitten a woman outside her home. - Tampa Bay

Tjipetir mystery: Why are rubber-like blocks washing up on beaches?

Horrible Hauntings: An Augmented Reality Collection of Ghosts and Ghouls