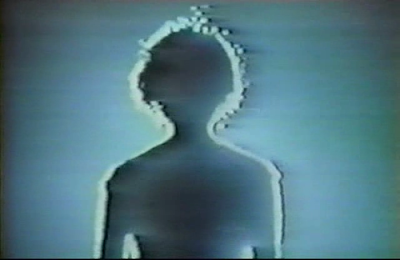 A witness in Rockville, Indiana has claimed that alien Archons have been contacting him regularly. This report has been obtained from a testimony included in the database of Mutual UFO Network (MUFON), published on 20 Nov, 2014.

He describes the beings that are allegedly contacting him.

“Two different types of beings are contacting me. One is a gray and the other is pure energy.”

“They contact me directly in my mind with thought and video type transmitions.”

He further says that he needs to talk to someone about the situation. He also talks about an alien implant in his jaw.

“i need to talk to someone to deal with this, any help would be appreciated. My dentist says i have an implant of unknown origin in my bottom left jaw.”

He talks about a photo from his childhood that has an alien in it.

“I also have an alien orb behind me in a photo when i was 5yrs old playing a piano.”

He then describes how he has been taken to alien ships several times.

“I have been on board their ship several times. My body stays behind, but I’m there as energy.

He talks about the landing site of the alien ship.

“Have a scorched landing site 75 ft from my house where we enter and take off.”

Finally he tells us why he needs to share this information.

“I saw ALOT! I need to share info with someone who can understand.” - Agora Cosmopolitan

NOTE: I've heard and read many of these scenarios...be it Archons (vengeful old order beings) or more benevolent species. I have a lot of doubt with this particular report....just doesn't parallel with most multiple alien abduction testimonies. Lon

San Jacinto, CA - 11/29/2014 - 3:46AM: I was in my daughters room in the early morning. I thought I heard her talking on the phone, due to it being almost 4 AM. I went into the bedroom where she was sleeping, and came to realize she wasn't on the phone. Now all I heard was a mumble and a one sided conversation that was taking place. I then turned on the light to see if she had the phone, and she did not. I then turned off the light, and was standing in front of the window talking to her. About 2 mins goes by, and I see a flash come from outside, next thing I see was this creature fast with backwards legs, sprinting across my patio. Now I had the porch light on, so it was clear. It seemed to have smaller arms, shorter like from ours from our shoulder to our elbow. It could have been because it was sprinting, and had its arms up. It also had no hair on its body, and had skin the same color that of a plucked chicken or turkey. It was about 4-6 feet tall. I then got close to the window to look across the porch, and it was gone. This whole event happened 3 or 4FT in front of me. - MUFON CMS

Shopkeeper 'placed in trance by hypnotist' during theft in north London

A “hypnotist thief” apparently put the owner of an upmarket off-licence in a trance before rifling through his trouser pockets and stealing the day’s takings.

Friends today said Aftab Haider, 56, the owner of independent wine merchants Hops and Pops in Highgate, north London, was “stunned” by the theft of hundreds of pounds in cash.

The raid mirrors techniques used as entertainment by street magicians and is the first time its use in crime has been captured on CCTV in the UK.

The suspect, an Eastern European man wearing a black bomber jacket, brushed past Mr Haider as he placed a bottle on a shelf, and gently tapped him on the arm.

A few seconds later, the suspect made a stabbing gesture with his right hand at eye-level which appeared to leave Mr Haider, known as Aziz, mesmerised.

He reached inside the motionless shop owner’s trouser pocket, and pulled out his wallet before briefly squeezing his shoulder.

The thief, who kept up a quietly-spoken patter throughout, then mimed the gesture of a pregnant woman’s belly as Mr Haider turned to face him.

He reached into his other pocket and pulled out the day’s takings, hundreds of pounds in a bundle of notes, before tapping him once more on the shoulder and quickly walking out. Read more w/ video at London Evening Standard 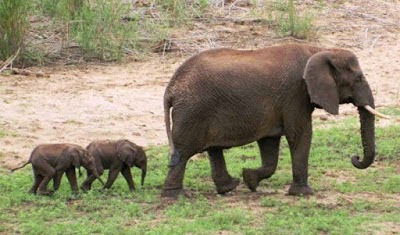 04 December 2014, Pongola, South Africa: Pongola Game Reserve, a privately-owned big-four game reserve in Northern Kwa-Zulu Natal, today reported the birth of African elephant twins. Scientific evidence suggests that there is less than one percent prevalence rate of elephants twinning and even less of a chance that both twins survive into adulthood, making the birth of these young elephant twins an incredibly rare natural occurrence.

The yet unnamed twins were born to a 31 year old elephant cow called Curve, so named for the curve of one of her tusks. She birthed three offspring before delivering the twins, all of which were male. Paternity of the twins points to Ingani, a 44 year old elephant bull that deceased slightly more than a year ago. The sex of the twins remains unconfirmed as Curve is given enough space and a fighting chance to beat the mortality odds for the twins.

Confirms Dr. Ian Whyte, “This is the best approach. Mortality of one of the twins usually occurs as the increasing demand for milk by two calves cannot be met by the mother and the less dominant of the two calves usually cannot gain access to its share. One rather famous Matriarch in Kruger dubbed MaMerle produced a set of twins in 2002, both of which survived to post weaning age, and she then produced a second set in 2006, both of which had survived to more than a year old when she was last seen. Curve needs a stress free environment to beat the odds.”

Well established population stabilising measures for the region’s elephant are in place; vasectomies as well as Gonadotropin-releasing hormone (GnRH) to stabilise the population since August 2008. Against these odds, the elephant twins were safely birthed, surely a positive sign for long and healthy lives. - Pongola Game Reserve

Bigfoot Photographed and Recorded in Britain

Todd Standing's House Was Broken Into and Bigfoot DNA Samples Were Taken?

At Last, the Double-Headed Bunyip of Tuckerbil Swamp!

Did the Ancient Chinese Make Contact With Native Americans?

Grimoire for the Green Witch: A Complete Book of Shadows

Power Spellcraft For Life: The Art Of Crafting And Casting For Positive Change