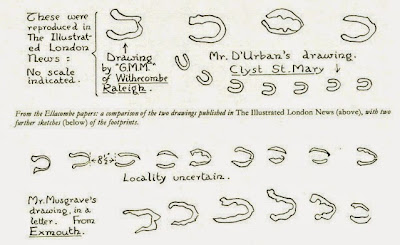 On Feb. 9, 1855, in the county of Devon, England, residents were mystified when they awoke to find strange tracks in the snow—tracks unlike any animal tracks they’d seen before. As groups of people across multiple villages spanning some 40 to 100 miles followed the tracks, curiosity turned to a mounting sense of horror and dread.

Some 4–5 inches long and in the shape of cloven hooves, they went up walls, across rooftops, from one side of objects inexplicably through to the other side. They seemed to sink so low in the snow, it’s almost as though they were hot and seared their way through. At spots, the tracks seemed to disappear, only to reappear some ways off, as though the being that made them had flown for a short stretch. The single-file prints suggested a biped.

In some villages, it seemed the maker of the tracks had visited nearly every home. Read more about the mystery at The Epoch Times 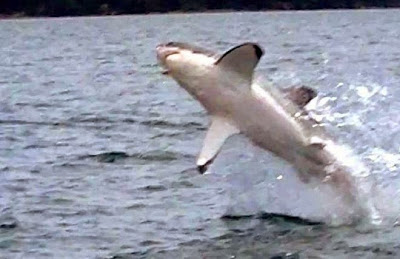 A video taken by two Cessnock-area locals featuring a 2.5-metre great white shark has gone viral across the internet and social media.

Nulkaba’s Warren Sternbeck and his brother-in-law Rodney Collins were fishing off Pulbah Island in Lake Macquarie on December 3 when the shark jumped out of the water.

“We followed it for a bit and saw it breach again,” he said.

“I said to Rodney to keep the video going and we might capture it leaping out of the water.’’

After sending the footage to the Newcastle Herald, the video has since become one of the publication’s most- watched videos in history with over 39,000 views.

“I spoke to a friend in Japan and even he’s seen it.”

The video has also appeared on several national websites including the Sydney Morning Herald, as well as regional publications such as Murray Valley Standard and Wagin Argus.

The great white shark video made headlines after the increasingly high figures of sharks in the Hunter region. - Cessnock Advertiser

NASA's exploratory rover has discovered mysterious 'belches' of methane gas on the surface of Mars.

Methane is a particularly important find because on Earth more than 90% of all methane gas is produced by living organisms.

Its confirmed discovery on Mars has been hailed as "very exciting" by scientists and suggests that there must be some unknown active process on the planet responsible for producing it.

The readings were picked up over a two-month period by the rover's Tunable Laser Spectrometer (TAS) instrument.

"I'm going to go out on a limb here and say flat-out, I consider this to be the first truly credible detection of methane in the atmosphere," said Bruce Jakosky of the University of Colorado.

"A lot of questions have been raised about Earth-based telescopic measurements. This is incontrovertible. That makes it a very profound measurement."

The way in which the methane seemed to spike and then dissipate suggests that its source must have been small and close to the rover as oppose to being large and further away.

There is in fact a chance, albeit a small one, that Curiosity may have picked up the first direct evidence of extraterrestrial organisms living on the surface of Mars.

Villagers in a remote Kazakhstan village are still inexplicably falling asleep for days at a time.

The peculiar malady, which has afflicted as many as 100 people over the last two years, has now become so notorious that the people of Kalachi have taken to calling the place "Sleepy Hollow".

The ailment sees people suddenly falling asleep out of the blue and sometimes remaining that way for several days.

In one of the most recent cases eight children fell asleep within the space of an hour on the first day of school in September.

In another a total of 20 people fell unconscious at around the same time and couldn't be roused for several days. One ambulance driver even reported encountering as many as 60 people who were suffering from the condition during his visit to the village to investigate the phenomenon.

Whole groups of doctors, virologists, radiologists and toxicologists have all been to the village at various times but to date nobody has been able to find a conclusive explanation.

Examples of psychic power are found in the Bible

Physicists Have A Problem With Time

Cows Can Relax as the Beast of Bodmin Moor is Identified

The Next Time Someone Says the Internet Killed Reading Books, Show Them This Chart

The "Supernatural" Book of Monsters, Spirits, Demons, and Ghouls