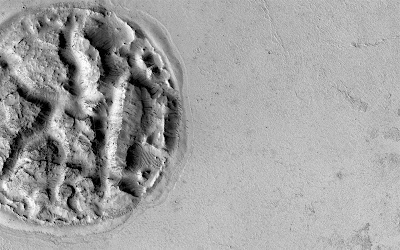 Amid miles of perfectly flat lava flows in the Athabasca region of Mars, this enormous mound appears out of nowhere, looking for all the world like a titanic cookie — and scientists are unable to account for it. Athabasca is characterized by some of the youngest lava on the planet, forming a smooth surface yet to be marred by stress cracks and meteor impacts. The 1.2-mile-wide cookie is one of several such formations in the area, but how they came to exist is still a mystery. It's possible that lava pushed up from beneath to make the mound, and the troughs suggest ice too may have been present — but why here and not elsewhere? Geologists and astronomers are poring over imagery from Athabasca taken by NASA's Mars Reconnaissance Orbiter, and hope to find some reason for this striking formation's appearance.

This was received from a reader:

My wife was in Ocean City, MD this past week with her youngest daughter (my step daughter) and granddaughter. They just got back in town this afternoon and I asked them if they saw the fireball/meteor event this past Wednesday night. They didn't but they told me that they had a different sighting on another night. On this past Monday, 12/1, at around 6:00 - 6:30 pm they were traveling along Coastal Highway in Ocean City on their way to dinner. As they were traveling, my stepdaughter, who was a passenger in my wife's truck spotted a strange light out over the ocean. She said that it was red orange/orange in color and appeared to be stationary. A short time later, she saw three more lights of the same color appear in proximity to the first one. She described the tree lights as being in a V-shaped pattern, parallel to the surface of the ocean, with the point of the V being farther away. The single light was to one side of the other three and appeared a bit closer. She described them as being about the size of a pencil eraser from her vantage point. She said the objects appeared to be stationary. She was able to observe the objects for approximately 5 minutes before they disappeared. My stepdaughter called these objects to the attention of my wife. My wife was driving and couldn't observer the objects in detail, but what she described backs up what my stepdaughter described. My 7 yr. old granddaughter was also in the truck, but was preoccupied with something else and did not observe the objects. Neither witness described seeing lights that would be consistent with normal aviation lights. The objects they reported maintained their color/shape throughout the duration of the event. My wife has an interest in UFO's and such things and has an idea of what to look for because me. My stepdaughter is fairly neutral on the subject, but is a sergeant with the Westminster City Police Dept. and would not lie or exaggerate about such things. My stepdaughter is going to file a sighting report with MUFON, at my request. I asked her to send me the case number of her report. I can forward that to you if you would like. BTW, while they were out and about on Wednesday evening, 12/3, they did not witness the the fireball/meteor event that was widely reported that evening. If either of you have any further questions, please let me know as I will ask and report back what I find out. TL

NOTE: Anyone have anything to offer on this?

It seems that a Mrs. EverywomanUSA from Austin, Texas is trying to sell what could very well be a family heirloom; that is...a haunted sword. According to her Craigslist ad, which was posted in the Austin, Texas online classified section on December 2, this 76 year old woman must get rid of this cursed sword ASAP, mainly because it upsets her knitting group when they tour her sword room. 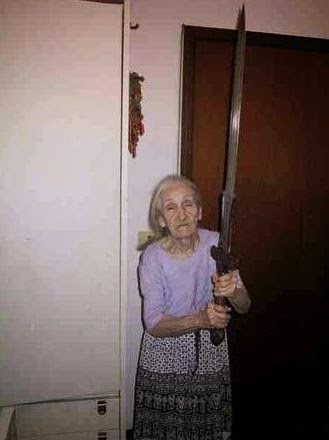 “This sword is from the 1700s. I got it at an antique store in my memaw’s home town back in 1984. The person who sold it to me told me to be careful because there is a 90+% chance that it is cursed. Since it’s been in my house my life has descended into pure chaos. My knitting group came over and they all said they could feel a strange energy in my sword room (I have a collection of over 100 swords. This is my only haunted sword). Since i got this sword, about 3 times a week a crucifix will fall off of my wall for no reason. I am 76 years old. I cannot have this cursed item in my house anymore. Please take it off my hands!!”

A big-cat sighting in East Texas may be uncommon, but not unlikely, said Billy Higginbotham, wildlife extension specialist for wildlife and fisheries at the Texas A&M research center in Overton.

“It is uncommon, but we have had confirmed sightings of mountain lions in East Texas before,” he said in response to an email claim about a cougar/mountain lion sighted along FM 2138 by a traveler headed toward Maydelle in late November.

“We've seen them confirmed in states much further east than we are here, and in the past 35 years that I have worked in Overton, several (East Texas) counties have confirmed mountain lions being seen. Several years ago, there was one (sighted) in Wood County, and not long after that, there was one in Jasper County,” Higginboth-am recalled. “Is it possible to have them in Cherokee County? It is.”

Reagan Pope, who contacted the Jacksonville Progress by email, said he was traveling about dusk Nov. 22 when “I saw what I thought was a deer just beside the road.”

Because it was growing dark and the weather was rainy, Pope said he was traveling about 45 miles per hour in his vehicle when he spotted the creature.

“I slowed down to around 25 MPH to cautiously pass the 'deer,' (but) as I drew near, I noticed it had a tail that was about two foot long and that it was quite bulky,” he said.

Driving past the animal, “I realized it was a huge cougar/mountain lion, approximately three foot tall and roughly 8-9 feet long, counting its tail,” he said, describing a coat with dark speckles in its fur.

The animal was completely unfazed by traffic, and Pope admitted while several years ago he had spotted a mountain lion drinking at a pond while visiting Colorado, he had never seen one so close.

“This one was just walking down the road, passing a few feet away from my car, and it didn't even look at me,” he recalled. - Jacksonville Progress 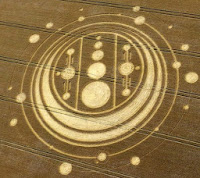 The Most Astonishing Crop Circle Artworks of 2014

1,001 Facts that Will Scare the S#*t Out of You: The Ultimate Bathroom Reader