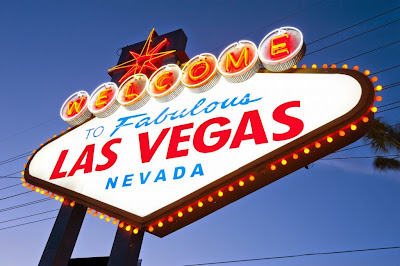 REPORT: US Military Has Been ‘Working Alongside’ Aliens Since The 50s, Claims Former US Air Force Serviceman - Extraterrestrial Beings Frequented Las Vegas Casinos

For centuries, people have argued over the possibility of existence of aliens. There have been incidents reported by humans claiming seeing extraterrestrial beings on Earth. Now an author, also a former US Air Force serviceman is claiming that he has seen human-like aliens frequenting Las Vegas casinos.

Jacob Martin tours an alien autopsy tent during the opening night of a festival celebrating the supposed visit of aliens to the Kelly-Hopkinsville area in 1955, in Kelly, Kentucky August 16, 2013.

Mirror UK is reporting that the American author claims that aliens "wearing "human outfits" frequently hit the bars of the Vegas strip." The report notes that Charles Hall is currently on a "speaking tour of Norway" where he revealed the account of his encounter with the aliens.

It is reported that the author of book series Millennial Hospitality

claims that the U.S. military have managed to establish contact with species of aliens called Tall Whites. He claims that the defence forces have also "worked alongside" these extraterrestrial beings "since the fifties." He reported that the U.S. military merchandised technologies with these aliens. However, the big revelation to the general public was avoided because authorities believed that aliens were not "emotionally ready" for such an interaction.

Elaborating further, he said these creatures "disguised" in human clothing, wore sunglasses to visit the casinos and "unwind." They reportedly visited places like Stardust in Las Vegas. He also notes that casinos frequented by them were usually "surrounded by CIA handlers."

"In 1964, when I was a weather observer at Nellis Air Force Base in Nevada, I witnessed interactions between the military and a group of mysterious tall, white, human-like extra-terrestrials," said Hall as quoted by Metro. Hall is known for his four-part book series "Millennial Hospitality" that provides the accounts of author's encounters and interactions with aliens. The report notes that these accounts were later "revealed" to be "true."

Also, author's brief bio on Amazon.com states that Hall's "real life experiences" during his service as a weather observer in Nevada has served as the "background material" of his book that was first published in 2002. Hall served as a military man in United States as well as Vietnam.

He claims that many of his colleagues at the former military base, close to Las Vegas had had an encounter with Tall Whites. This base is now not in use. He describes the encounter with these aliens as a "shocking" event because one is not certain whether they are "looking at ghost or an angel" or it's simply a dream.

This is not the first time such accounts about aliens' presence on the earth have been reported. As noted in the report, Nigel Watson, the author of UFO Investigations Manual, state that these accounts of aliens' infiltration in "top levels of society" have emerged time and again. - IB Times

NOTE: Some guy with a conehead costume sat beside me at a blackjack table at the Riveria...that was my only close encounter in Las Vegas. Lon 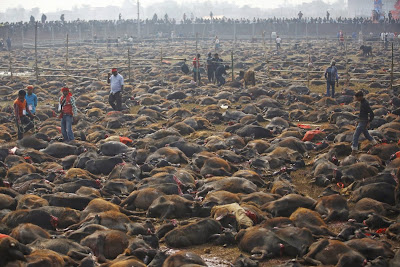 Hindu Worshippers Killed 500,000 Animals At A Festival, And The Pictures Are Staggering

The largest traditional animal sacrifice in the world began last weekend in southern Nepal with an estimated 4,000 buffalo, goats, and pigeons slaughtered on Friday alone.

The festival is held every five years, during which hundreds of thousands of animals are killed in the name of the Hindu goddess of power. Devotees believe the ritual will bring them good luck.

NASA's successor to the space shuttles landed safely earlier today after embarking on its maiden voyage.

Crowds had gathered at Cape Canaveral in Florida this morning as the capsule, which will one day carry astronauts to Mars, blasted off successfully and headed out in to space.

During its four-hour flight it traveled further out than any other manned spacecraft had done in over four decades.

Following two orbits of the planet it then descended through the atmosphere and splashed down in the Pacific Ocean.

The space agency stated that Orion's systems had worked "to perfection" during the test flight.

A second unmanned flight is planned for 2018 and the first manned mission, which could see astronauts take a trip around the moon, is tentatively scheduled for the early 2020s. - Independent

A crocodile killed a man while he was retrieving golf balls from a dam called Lake Panic at South Africa’s flagship wildlife reserve, officials said Thursday.

The crocodile grabbed 29-year-old Jacques van der Sandt in its jaws on Wednesday night and disappeared under the water at Skukuza Golf Course next to a staff residential area within the park boundaries, according to Kruger National Park officials.

Rangers killed the crocodile after a two-hour search following the attack, according to a park statement. It said the body of Van der Sandt, the son of a park employee, was recovered with tooth marks on the back and front but did not have any “mutilation.” The crocodile was 3.9 metres long, according to a report in Lowvelder newspaper.

“The animal was doing what naturally comes to them; hunting for food and unfortunately a life was lost in the process,” a SANParks ecologist, Danny Govender, said in the SANParks statement.

Oubaas Coetzer, a police officer, said the crocodile attacked van der Sandt while he was standing at waist height in the water and reaching below the surface to feel for golf balls on the bottom of the dam at about 10 p.m..

“One guy challenged the other to see who can retrieve the most golf balls,” Coetzer said. He described van der Sandt as a keen golfer who grew up in the park and had probably seen crocodiles in the dam in the past. The victim’s mother works for the park, and his father also worked at Kruger until his retirement.

“There is a resident croc in the dam that feeds off the fat barbel in the water,” Kruger Park says on its website, referring to a type of catfish.

About 280 people have been attacked worldwide by crocodiles this year, according to CrocBITE, a website that tallies global crocodile attacks. - National Post

A Mysterious Giant Legoman Has Appeared On A Japanese Beach

10 Christmas Songs That Are Actually Creepy As Hell

Hidden History Of Skull And Crossbones: The Untold Story Of The Templar Shining Ones

If you don’t believe in the paranormal, can you explain these?

The Surprising Power of an Electric Eel’s Shock