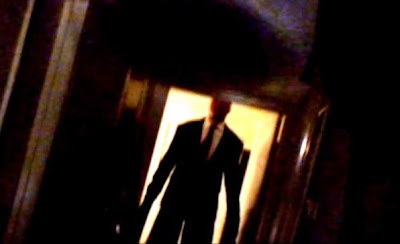 A lawyer for a Wisconsin girl accused of luring a classmate into the woods and repeatedly stabbing her to please Slenderman said on Tuesday his client still believes in the fictional Internet character and is unfit to stand trial.

Morgan Geyser and her friend Anissa Weier were both 12 when they were charged as adults with first-degree attempted homicide in the attack on a friend the morning after a sleepover in late May in Waukesha, a suburb west of Milwaukee.

The girls told investigators they attacked their friend to impress Slenderman, a tall, online bogeyman that they insisted was real, according to a criminal complaint.

Waukesha County Circuit Court Judge Michael Bohren on Tuesday scheduled a Dec. 18 competency hearing for Geyser so that her attorney Anthony Cotton can challenge an expert report that found her mentally competent to stand trial.

Cotton said on Tuesday his client still believes that Slenderman is real and he believes that she is unfit to stand trial based on interactions with her and discussions with doctors.

Bohren ruled Geyser incompetent to stand trial on Aug. 1, when two mental health professionals told the court she lacked the capacity to assist in her own defense. At that time, Bohren ordered Geyser to be committed to a state department of health services facility, where she is being held and treated.

The victim was stabbed 19 times, but survived. She spent six days in the hospital before returning home for further recovery and returned to school in September, a family spokesman said.

Weier, who is now 13, was found competent to stand trial under mental evaluations released publicly in court on Oct. 22. Weier's attorneys have objected to the findings and Bohren has scheduled a competency hearing for her also on Dec. 18.

Wisconsin law requires attempted homicide cases involving suspects at least 10 years old to begin in adult court before attorneys can ask a judge to move the case to juvenile court.

Dealing With Trolls...Tell Their Mom

An Australian game reviewer got sick and tired of young boys trolling her and threatening to rape her, so she did what any self-respecting adult would do — she told their parents.

The 21-year-old journalist Alanah Pearce normally reviews video games for local radio stations and television in Brisbane, Queensland. She also has a YouTube channel. But recently, she has made a name for herself by smacking down trolls that send her vile rape threats for no apparent reason. Pearce is using a method not tested before, but appears to be having some luck.

"Sometimes young boys on Facebook send me rape threats, so I've started telling their mothers," she tweeted with a photo of the correspondence on Nov. 28.

Pearce wrote to one mother, who she contacted via Facebook: "Hi Anna, I don’t know you, but I was wondering if [blanked] is your son? I have never spoken to him before, but he sent me a concerning message to my public Facebook page today that I was wondering if you might be interested in discussing with him."

The mother replied: "Omg, little shit. IM SO SORRY. YES I WILL TALK TO HIM!".

“A while ago, I realised that a lot of the people who send disgusting or overly sexual comments to me over the internet aren’t adult males,” Pearce told The Guardian. "It turns out that mostly they’re young boys and the problem is they don’t know any better, so responding to them rationally didn’t resolve the situation. And it got to the point where their comments were starting to make me feel really uncomfortable.”

She then looked through the personal Facebook accounts of the trolls, and it wasn't difficult to see who the boys' mothers were. She got in touch with four different mothers, but has so far only had a response from the one above. - Mashable

It would appear that Ouija boards are fast becoming one of the “coolest” and “must-have” Christmas gifts of 2014, but the church has fiercely criticized the trend calling it “absolutely appalling,” and strongly warned people to “not let this darkness” into their lives.

Google reports that sales of Ouija boards are up to 300 percent, and are flying off the shelves quicker than you can say, “Oh no, it looks like poltergeist activity’.

The reason for the resurgence in sales is a new low-budget horror film called Ouija.

The film, which tells the time-honored story of kids meddling with powers they do not comprehend and then wondering why all of a sudden everything’s gone to hell, was slated by the critics, but cinema-going teens adored it.

Cue the current demand for Ouija boards. Interestingly, toy manufacturer Hasbro, who are one of the companies currently selling Ouija boards to ghost-seeking teens, helped finance the making of Ouija. Vested interests perchance?

Although Ouija boards are viewed as a harmless parlor trick by some, many, including the church, regard them as dangerous tools which can trigger psychological harm — or something even more sinister.

Church of England vicar Peter Irwin-Clark is one such man, and told the Daily Mail that he has witnessed the dark side of the Ouija, and believes it is hugely responsible to market and sell the controversial devices as toys.

“It is absolutely appalling. I would very strongly advise parents not to buy Ouija boards for children. It’s like opening a shutter in one’s soul and letting in the supernatural. There are spiritual realities out there and they can be very negative.

“I would hugely recommend people not to have anything to do with the occult. People find they are having strange dreams, strange things happening to them, even poltergeist activity.”

Ouija boards were invented in America at the height of the spiritualist craze of the 19th century, where seances and mediums seemed to be awaiting around every corner to help one contact the dead.

They enjoyed a brief resurgence in the 1960s, even outstripping sales of other well-loved board games such as Monopoly, and kids who didn’t have the money to buy a mass produced Ouija board would make their own.

Yet in 1973, the film The Exorcist, based on a true story of a teenager who became obsessed after playing with a Ouija board for long periods, seemed to change the public’s perception of the devices, according to Christina Oakley Harrington, proprietor of Treadwell’s, a London bookshop specializing in the esoteric and the occult.

“The horror film shifted the focus of Ouija to the idea of lost or malevolent spirits. That was where the culture of danger came in. Once you have something said to be a way of consorting with malevolent spirits, you get the Church involved.”

Catholic Priest and former exorcist Anthony Hayne was only too aware of the dangers of teenagers who “had been using Ouija boards and had let the darkness into their lives”.

The late Reverend Tom Willis, who was also a practicing exorcist, was also concerned about the dangers inherent in the Ouija board.

“A lot more people are dabbling in the occult and having seances, and that is causing a lot of problems. In the Sixties, the Ouija board caused so many problems — people ending up in mental hospitals because of what they have experienced.

“An unseen force spelling out messages may have sinister motives. It may pretend to be your grandmother you’re in contact with, but it might be something more evil that suddenly gives you some bad advice.”

Yet skeptics believe that when the planchette on a Ouija board moves to spell out messages, it is powered entirely by the subconscious of the users involved, and not spirits from beyond the grave.

Canadian paranormal investigator James Randi once tested this theory by blindfolding people taking part in a Ouija board session. The result? The chatty spirits seemed to be silenced when the users couldn’t see the board’s letters, and when they did speak, they spoke nothing but gibberish. - Inquisitr 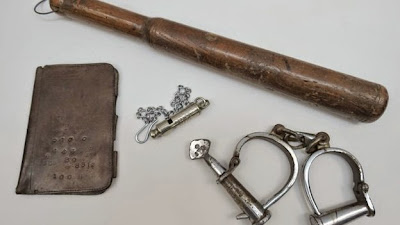 Rare Artifacts Have Surfaced from the Jack the Ripper Case

It's been over 125 years since Jack the Ripper prowled the streets of London, but here's something new: artifacts tied to the case are heading to the auction block.

The items include handcuffs, a whistle, a baton, and a notebook cover that belonged to PC Edward Watkins. On Sept. 29, 1888, at around 1:44am, Watkins was first on the scene in Whitechapel's Mitre Square, where the mutilated body of the Ripper's fourth victim, Catherine Eddowes, was found. She had many injuries, including the removal of a segment of her intestines, along with her left kidney. The beat cop was carrying these very items when he made this gruesome discovery.

The police tools — sold by a private collector whose grandfather acquired them directly from Watkins' descendants — are predicted to go for as much as $1,200 each in the December 10 sale.

Jonathan Humbert, of JP Humbert Auctioneers, told the BBC, "It is chilling to think these very items may have physically been only yards from Jack the Ripper and played such an integral role in one of the most fascinating unresolved crimes of all time. Ripper items are rarer than rare by their very nature and I have no doubt these will really capture the public imagination around the world." io9 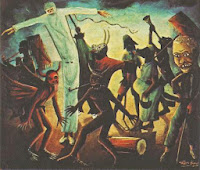 10 things you didn’t know about the ghostly Voodoo Dolls

If You Stopped Sweating, You Would Die

The Monster of Bedburg: A Werewolf?

Lightworker: Understand Your Sacred Role as Healer, Guide, and Being of Light