And To All A Good Fright! Five Films For Your Holiday Spookathon 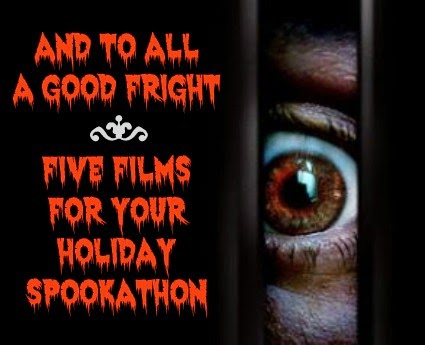 Traditional holiday films are well and good for people that love peppy puppies and happy little elves, but what about all those horror fans? Christmas can be one of the worst times of year for someone who enjoys a good ole’ fashioned scare. But horror fans don’t have to resort to staging their own blood-and-gore fests just yet, Hollywood has recognized the market for mistletoe miscontents and released a bevy of bloody films perfect for holiday viewing. Here’s a list of 5 movies that are sure to scare you back onto Santa’s “nice” list.

Christmas Evil
Brandon Maggart stars in this 1980's film about a man who is driven insane by his love for Christmas and Santa Claus. It opens with Maggart's character, Harry, as a young child. A traumatic event involving a father dressed as Santa drives little Harry to extremes as he realizes that Santa is not as real as he thought. Years later, Harry has become a toy maker and is obsessed with the behavior of children. With a naughty and nice book in hand, he starts to create his own Santa suit in order to become the Santa he always believed in. The audience soon finds out that Harry is not completely sane, as he really begins to show all those “bad kids” what is coming to them. Harry's attempt at Christmas cheer turns into a satanic fight for revenge, and it is the naughty ones that pay the price.

Silent Night, Deadly Night
Danny Wagner, Robert Brian Wilson and Lilyan Chauvin star take the lead in a Christmas film that’s guaranteed to traumatize. Young Billy (Wagner) is haunted by the memory of his parents being murdered by a Santa-dressed thief when he was only five. Three years later, Billy now lives at a children's home, under the reign of Mother Superior (Chauvin). Mother Superior loves nothing more than teaching the importance of punishment for naughty acts. Billy is abused and mistreated for the rest of his childhood within the orphanage. Only when he is 18 does Billy (Wilson) get out on his own, receiving a job at a toy store. When he is forced to wear a Santa costume for work, Billy snaps. An insane rampage, ending with a special Christmas gift for Mother Superior, is Billy's answer to every naughty act done by those in his past.

Rare Exports: A Christmas Tale
Starring Onni Tommila, Rare Exports takes place on a Christmas Eve in Finland. Young Pietari (Tommila) joins his father on an archeological dig only to find a frozen corpse of a bearded man who appears to be Santa himself. A legend of fearsome creatures who were frozen in the lake haunts the nearby village. With the help of Pietari and his father, they have freed the creatures. With a defrosted satanic Santa under capture and evil elves determined to get their master back, it is up to Pietari and his father to drive the Christmas creatures back where they came from. A memorable Christmas for their family, surely.

Black Christmas
Olivia Hussey takes the lead in this home invasion film for the holidays. The young and beautiful Jess (Hussey) takes a Christmas holiday along with her sorority sisters. Her life at that point in time is full of personal problems - she’s debating whether or not to get an abortion - and strange calls from an unknown number are the last thing she needs on her mind. Soon what at first is thought to be a prank escalates into total terror, and only after two sorority sisters have disappeared to the police take their plea seriously. A psycho named Billy is on the loose and wants the girls dead. With Christmas just around the corner, can the police do anything to help them? The girls cannot help but wonder how far the bond of sisterhood will take them, and if its enough to save their lives. Ignore the 2006 remake and go straight to the 1974 classic.

Gremlins
Hoyt Axton stars in one of the most well-known 80's horror films as tiny creatures tear through the town. Randall (Axton) has received new pets, adorable, wide-eyed gremlins who appear to be cuddly kittens combined with Yoda. With only a few rules in play, Randall is allowed to enjoy his pets to his heart's content. Only when these rules are broken do things start to go wrong - soon the little furry devils transform and begin to unleash mayhem across the entire town. One of the most easily accessible films in the holiday horror genre, Gremlins can be streamed (info here) or even downloaded from iTunes. Hilarious and horrific events occur as the holiday season takes a turn for the worst in one of the best (and perhaps only) Christmas films about a creepy critter catastrophe.

Christmas may be the time for good cheer, but there is no reason a few screams cannot be put into the picture. For horror fans all over the country, Christmas is simply another day for a good fright.