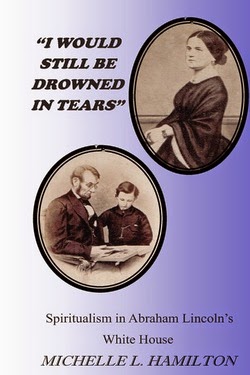 Mary Lincoln employed a variety of Spiritualists mediums during the Civil War. One séance would garner national attention. In April 1863, the Lincolns hosted a séance in the Red Room conducted by Charles E. Schockle. For this séance Abraham and Mary Lincoln invited Secretary of the Navy Gideon Welles and Secretary of War Edwin Stanton.

Charles Schockle was accompanied by his friend Prior Melton, a reporter for the Boston Saturday Evening Gazette, who preserved the evening’s events in an article for his newspaper. “A few evenings since, Abraham Lincoln, President of the United States, was induced to give a spiritual soirée in the Crimson Room [Red Room] at the White House, to test the wonderful alleged supernatural powers of Mr. Charles E. Schockle,” Melton reported in his official account.

According to Melton, the spirit circle began with the assembled party gathering around a table. Shortly after the circle had commenced, the President was called away from the parlor, much to the spirits displeasure. “The spirits, which had apparently assembled to convince him of their power, gave visible tokens of their displeasure at the President’s absence, by pinching Mr. Stanton’s ears and twitching Mr. Welles’s beard,” Melton recorded.

President Lincoln’s absence was not long and the séance continued with the spirits demonstrating their powers by physically lifting items around the parlor. After the spirits had established that they were present, Schockle produced paper and pencil which he laid on the table and covered with a handkerchief. According to Prior Melton, within moments a message appeared on the paper from Henry Knox, the first Secretary of War under George Washington. Amused, President Lincoln asked if it was possible for Knox to tell him how much longer the war was going to last.

Within moments the following answer appeared: “Washington, Lafayette, Franklin, Wilberforce, Napoleon and myself have held frequent consultations on this point. There is something which our spiritual eyes cannot detect which appears well formed. Evil has come at times by removal of men from high positions, and there are those in retirement whose abilities should be made useful to hasten the end. Napoleon says, concentrate your forces; Lafayette thinks that the rebellion will die of exhaustion; Franklin sees the end approaching, as the South must give up for want of mechanical ability to compete against Northern mechanics. Wilberforce sees hope only in a Negro army.—KNOX.”

This rambling message amused the President. “Well opinions differ among the saints as well as among the sinners. They don’t seem to understand running the machines among the celestials much better than we do,” Lincoln exclaimed. The President then used the spirit’s disjointed message as a pointed critique of the contradicting advice he received from his cabinet officials. “Their talk and advice sound very much like the cabinet—don’t you think so Mr. Welles?” Lincoln asked. Clearly uncomfortable with the new direction the evening was taking, Welles fumbled for an answer. “Well, I don’t know—I will think the matter over, and see what conclusions to arrive at,” Welles feebly answered.

Fortunately for the beleaguered Secretary Welles, Schockle and the spirits picked this moment to continue with their demonstrations. The President asked the medium to ask the spirits about the Confederate raider CSS Alabama. The answer came in an impressive feat of physical mediumship in which Prior Melton asserted that the assembled party saw the ship moving across the ocean reflected in the mirror that hung over the fireplace mantel. The sight impressed the gathered party. “Well, Mr. Schockle, I have seen strange things and heard rather odd remarks; but nothing which convinces me, except the pictures, that there is anything very heavenly about this,” Lincoln proclaimed.

Before the séance concluded, Abraham Lincoln requested that Charles Schockle contact the spirit of Stephen Douglas—which the medium did. Impressed with Douglas’s pronouncement the President concluded, “I believe that, whether it come from spirit or human.” The séance quickly became public knowledge when other Northern newspapers picked up Melton’s article, usually under the headline, “Spiritualism in the White House.” -- excerpt from "I Would Still Be Drowned in Tears": Spiritualism in Abraham Lincoln's White House

available now in paperback and Kindle (by Savas Beatie, LLC).