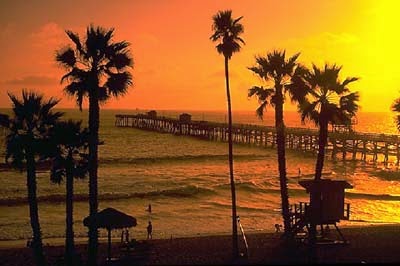 6/1/1998 - We were fishing on the San Clemente Pier in 1998 around 2am, there were approx 5-8 of us fishing on the pier this eve, half drunk, i was not drinking, at around 2 AM an item approx 1.5 miles away just south of the San Onofre Nuke Plant and directly off Camp Pendleton, approx 1/2 mile off shore Ascended from the Pacific ocean, 4 of us watched it happen and questioned what we were seeing, we were able to see the light below the water and above it when it came out, it hovered about 20ft above the water, this us a guesstimate, for about 20 seconds, it continued to change colors during this time, after 20 seconds the item shot faster them a bullet to the South East over Camp Pendleton and disappeared. No noises were heard, no wake could be seen. Neither I or anyone there could determine or suggest what the item could have been. I was 17 when this occurred and knew i had just seen either some super top secret craft or a alien craft, either way i never reported it in fear the government would do something to me as i felt i should have never saw what i did that night. - MUFON CMS

Woman faked Ebola to get out of jail

A Chesapeake, VA woman arrested Monday allegedly implied she may be sick with the Ebola virus.

"She was subsequently arrested for possession of cocaine and possession of drug paraphernalia and made comments to the officer that warranted a stop to the hospital," said Officer Kelly O'Sullivan.

Miller said she was driving herself to the hospital because she was in pain, according to bail bondsman Troy Merritt.

Miller talked to Merritt over the phone from jail and said she told police she was sick after traveling from Liberia.

"[Miller] told me she thought by telling police she had Ebola they would let her out of jail," said Merritt. "I told her 'No, you're probably going to stay there longer now.'"

Deputies then put on surgical masks and gloves to isolate Merritt.

After escorting Merritt to a nearby hospital, it was determined she had never been to West Africa or left the U.S., according to O'Sullivan.

Charges are pending for obstruction of justice. - WTSP

Human beings are, in general, a superstitious lot. Our tendency to see patterns where they don't exist, and to falsely apply cause to effect, may have helped keep us alive back when we were little more than a band of frightened critters scurrying about the savanna.

Those tendencies linger to the present day, reflected in our stubborn belief in completely irrational things: Rabbit's feet. Horoscopes. A return to the gold standard.

The Chapman Survey on American Fears, a comprehensive study of the fears, phobias and irrational beliefs of the American people, was released last week and contains an interesting section on belief in the paranormal.

The results are drawn from a nationally ​​representative sample of 2,500 American adults.

It finds that belief in certain paranormal phenomenon – such as influencing the world with physical thought, and foretelling the future with dreams – are fairly widespread. On the other hand, few Americans actually believe in astrology.

It's instructive to compare Americans' belief in the paranormal with their understanding of scientific knowledge. For instance, a 2014 AP poll found that 51 percent of Americans said they were confident that childhood vaccines are safe and effective. This is roughly the same proportion of Americans who believe houses or rooms can be haunted by spirits.

Slightly over 40 percent of Americans believe in UFOs. This is considerably higher than the share of Americans who are confident that global warming is real, that life evolved through natural selection, or that the earth is 4.5 billion years old.

About as many Americans say they believe in Bigfoot as say they're confident that the universe began with a big bang.

The Chapman authors provided breakdowns by party affiliation. In general, Democrats were slightly and in some cases significantly more likely than Republicans to believe in paranormal phenomena: 75.6 percent of Democrats agreed that positive thoughts could influence the physical world, compared to 68.6 percent of Republicans.

Democrats were significantly more likely than Republicans to believe in fortune telling, and about twice as likely to believe in astrology.

On the other hand, Republicans were significantly more likely to say that Satan causes most evil in the world, a reflection of the higher degree of religiosity in the Republican party.

There were no significant partisan differences on belief in Atlantis, UFOs or Bigfoot. - Journal Gazette

Over the past year, some unusual events have occurred at a courthouse in eastern New Delhi. Books have disappeared, strange noises have been heard. Computers and lights have seemed to switch on by themselves.

Employees at Karkardooma District Court began wondering whether the complex was haunted. Eventually, the executive committee of the local bar association called a meeting, mulled over the evidence and decided to install closed-circuit television cameras to find out what was going on.

“We were primarily concerned because we thought somebody was stealing books,” said Raman Sharma, joint secretary of the Shahdara Bar Association. But they were unsure whether the culprit was human or otherworldly.

In opening its investigation, the bar association joined a long list of authorities that have taken seriously complaints of paranormal activity in India, a country said to live in several centuries at once.

Last year, for example, a police station in the central Indian state of Madhya Pradesh was shuttered after a “resident spirit” terrorized the beat constable on duty, according to a report in the Times of India. A state lawmaker demanded an inquiry. Elsewhere, a primary school was closed temporarily when a boy said he saw an egg-shaped ghost emanating from a chalkboard. Read more w/ video at TWP 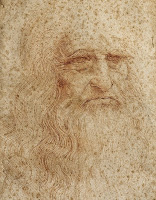 Da Vinci Drawing Hidden From Hitler Due To Its Magic Power

How Should Humanity Be Remembered?