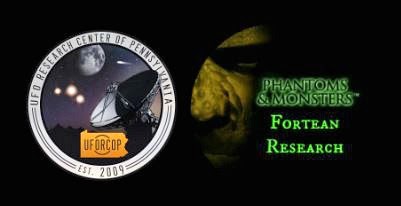 The disappearance and eventual death of 39-year-old Todd J. Sees has been one of the most mysterious cases in modern ufology. A joint investigation by Butch Witkowski / Cold Case Unit of the UFO Research Center of PA and myself, Lon Strickler of the Phantoms & Monsters Fortean Research team has uncovered previously undisclosed information in regards to this incident.

Here is a brief synopsis of the incident:

In the early morning of August 4th, 2002,Todd Jeffrey Sees rode his ATV, starting at his home at the base of Montour Ridge in Northumberland County, PA. (Point Township), on a short jaunt up a mountain trail adjacent to a sprawling high power line. After he failed to return home by noon, the family became concerned and notified the authorities.

A massive search effort ensued...which included search & rescue personnel (with search dogs and helicopters), local & state police, as well as an organized search team that numbered 200+ volunteers. The entire area from the top of the ridge, adjacent woods and the family property was explored...including a small pond located 70 feet from the Sees house. Divers and dogs searched the area in and around the pond...without success.

The effort continued for approximately 36 hours...until the second morning of the search, a family member noticed something in the bushes around the fore-mentioned pond. Todd Sees body had been discovered...in an area that was heavily searched the previous day.

Since that time, there has been very little information released to the public. The death was ruled as 'fatal cocaine toxicity'...despite evidence suggesting that something else most likely occurred. The circumstances involving the recovery, handling, autopsy and final arrangements with the body are also mired in controversy.

So, we are left with the obvious question...what happened to Todd Sees?

Peter B. Davenport, President of the National UFO Reporting Center investigated the information forwarded to UFORC by witnesses, including the following report:

The craft was seen on Montour Ridge on August 04th, 2002 at 5:30 in the morning by a farmer and also 3 fisherman on the Susquehanna River. It was at the very top of the mountain on the western end, just hovering above the power lines. The farmer said it appeared out of nowhere, he could see some sparks flying from the tower and dropping to the ground. The whole incident lasted about 10 minutes, then it (the object) got very bright and took off very low heading west, then it stopped and went straight up, it was gone in seconds. The horses on the farm were very upset and nervous for about 12 hours.

Subsequently, NUFORC received this excerpt from another report:

Farmer saw an object above Montour Ridge at the powerlines, on top of the mountain, it was round and very still over the lines. Suddenly it moved what looked like a few hundred feet to the east, it stopped and a beam of blue and white light shined to the ground. What was seen next was very unnerving, he saw what appeared to be a man suspended in the light, he was being pulled up headfirst, he was moving his arms slowly in the light. What looked like a man was pulled up into the bottom of the craft. A few seconds later and it started shuddering, then went west very fast stopped briefly, then went straight up and out of sight.

On August 29, 2002, the day after NUFORC had posted the two reports shown above, NUFORC received a third report from an individual, who provided their name and contact information...though, that information was never made available. Much of that report, along with another report that soon followed, contained a considerable amount of false information. As a result, speculation has run rampant for almost a decade. This is why Butch & I are investigating this case...to find the truth behind the speculation. If you’d like to hear the remainder of the Davenport report, including the information we've uncovered, please listen to the following radio presentations:

Since our initial report in February 2013, some of Todd Sees’ personal information has come to light. But more data and intelligence is needed in order to form a reasonable hypothesis for this incident.

Some of the documented facts and evidence-based deductions include:

- There was a cover-up by local officials and, most likely, Federal officials.

- There were reports that the FBI was involved. It seems more likely that this was a military operation (USAF) and that all people involved with the search, including the family, were instructed not to disclose any information.

- Todd Sees body was found in an area, on his property, that was searched by officials and trained dogs. It seems reasonable to assume that the body was placed at the recovery area.

- The physical condition of the body was inconsistent with the amount of exposure and time of death recorded.

- The toxicology report and the coroner's determination of death was inconsistent with the time and evidence provided.

There are many other inconsistencies and false data that were found and/or being investigated. Some of the newer intelligence is currently being researched by our groups.

In recent months, there have been other groups who have stated that they are now looking into the Sees case....after sitting on their collective hands for over a decade. Much of bluster was created after Butch & I made our assessment in February 2014. Since then, we have been subjected to countless attacks by others...namely, a few individuals associated with Pennsylvania MUFON. The fact is, we uncovered startling details that others now want to take credit for. As well, there is a concerted effort to maintain the cover-up associated with the death of Todd Sees.

We have always maintained that investigators should work hand-in-hand to find the truth, but also give credit where credit is due. This is why Butch & I are proposing the formation of a conference and/or discussion group in order to consider the facts in the matter of Todd Sees' disappearance, death & recovery. This would be an opportunity to bring together investigators and possible witnesses...and add fresh eyes & perception on the evidence. We would welcome your input on this concern.

In the meantime, any new information concerning this incident is welcomed. Please forward to lonstrickler@phantomsandmonsters.com or go to UFORCOP contact...Thanks.