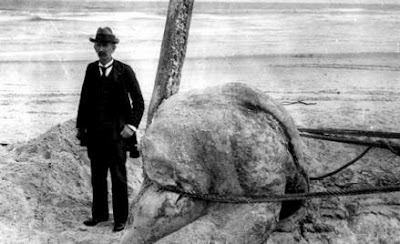 By Greg May - Before Sea World there was Marineland.

In fact, there were two – one in Florida and one in California and both oceanariums figured prominently in the discovery and debunking of sea monsters on both coasts of the United States.

In 1896 two young men were bicycling on Anastasia Island near St. Augustine, Florida when they made a startling discovery: lying half-buried in the sand was the huge carcass of a sea creature. At first it was thought to be the decomposed remains of a whale but St. Augustine physician Dr. DeWitt Webb noticed several appendages or ‘arms’ so he took an axe and cut off a section of the pinkish-white flesh and sent it to the Smithsonian Institution. Dubbed ‘The St. Augustine Monster’ by the press the finding was soon forgotten after creating a sensation.

In 1957 Forrest G. Wood, curator of Marineland of Florida came across an old, yellowed newspaper clipping of ‘The St. Augustine Monster’ and began an investigation. When Wood found out that samples had been sent to the Smithsonian, he contacted University of Florida octopus expert Joseph F. Gennaro, Jr. who – after some scientific sleuthing – concluded ‘The St. Augustine Monster’ had been the remains of a giant octopus having a 200-foot armspan when alive!

Bahamian natives talk of the ‘lusca’ – a giant octopus believed to inhabit the ‘blue holes’ of the Bahamas. Locals claim the lusca comes to the surface at night in search of prey and is known to pull boats underwater and even snatch unsuspecting victims from the beach. The largest species of octopus known to man is the giant Pacific Octopus (Enteroctopus dofleini) which can attain an armspan of 24 feet when fully grown.

Have you every lost contact with someone and then find out they had died? Back in the 70s I was employed as an aquarist at Sea World in Orlando. I had a good friend who was a dolphin trainer at the now-defunct Aquatarium on St. Petersburg Beach. Years later – after having changed careers and not hearing from Mike for over a decade – I sadly learned he had died in a cave-diving accident in the Bahamas. I shudder to think that Mike – who had a fascination for sea life like me – could have been the victim of the lusca.

The late Kenneth Norris – the first curator of Marineland of the Pacific in southern California and one of the world’s most respected oceanographers – may have solved posthumously the mystery of ‘The San Clemente Monster’ discussed by Loren Coleman and Patrick Huyghe in their book, ‘The Field Guide to Lake Monsters, Sea Serpents and other Mystery Denizens of the Deep’. Sighted so frequently off the Channel Islands of southern California since 1914, this ‘waterhorse’ even captured the attention of sportsfisherman and writer Zane Grey. In his book, ‘The Porpoise Watcher’ Norris describes how he and the Marineland collectors would often observe whales ‘spyhopping’ off the southern California coast. Spyhopping is a natural behavior in which a whale takes a vertical position in the water to look at its surroundings such as land promontories. Gray Whales are notorious for doing this during their annual migration from the Bering Sea to the lagoons of Baja, Mexico. When viewed from a certain angle, the spyhopping whale takes on a different appearance. The superstitious Sicilian fishermen working the waters off southern California called pilot whales ‘monaco’ – meaning ‘monk in black robes’ – since this is what the spyhopping whales looked like to them as they rose out of the sea.

California’s Marineland is gone with the sea wind but once overlooked the Catalina Channel at the tip of the Palos Verdes Peninsula. Those waters are known for USO sightings and it is believed there is a submersible alien base in that area off Redondo Beach.

How fascinating it would have been to have ‘picked the brains’ of the late Dr. Norris and those weather-beaten Marineland fishermen regarding any experiences or anomalies they may have observed or encountered while they were in those waters!