'ET' in a Mandurah Humpy 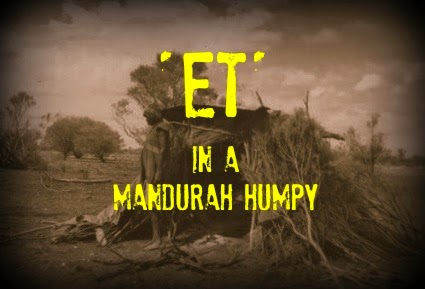 The following article was forwarded to me by my friend and research colleague 'Oz', who reside in Queensland, Australia. He first references a post by UFO researcher Bill Chalker, then adds his own interesting observations:

In 1982, a 67 year old woman saw a picture of "ET", Steven Spielberg's cute alien creation. It made her think of an experience she had as a 15 year old girl, near the estuary at Mandurah, Western Australia. She supplied a report to the Perth UFO Research Group which stated:

"(In 1930 I was) sitting reading with my parents in a humpy, on a block in Mandurah, in Greary Rd, by the light of a hurricane lamp, with the door partly open. The time (was) about 8 pm as we went to bed early. "A little pink creature walked in. (It was) about 24 inches in height (with) large ears, big bulbous eyes, covered with a film, small hands, large feet, slit of a mouth, no hair, and shiny as if wet or oily.

"We were terrified and my father went white and being a religious man said it was the work of the devil.

"Picking up a prawning net, he picked it up in it and it made a noise like EE...EE and my father put it outside. We never saw it again and went to bed feeling very scared. This was in 1930 and I never thought any more about it until I saw a picture of ET, although only its eyes were the same.

"...It did not have a round body, more straight down like a child's body. I cannot remember seeing any sex organs... (It's shape was) like an elf."

A MORE MODERN CASE WITH ASTOUNDING SIMILARITIES ..... (possibly from the 1980's)

The above case as recorded has astounding similarities to an encounter related to me direct by a construction project manager who had been working on Groote Eylandt at the time of his experience. (Groote Eylandt is the largest island in the Gulf of Carpentaria in north eastern Australia. The land is owned by the indigenous native aboriginal people).

The elders explained that:

* 2 young children had just passed away and the funeral ceremony was to be held on the day the project manager wanted to go fishing.
* the project manager was told to drive well clear of the site of the upcoming funeral ceremony.
* they (the elders) wanted the souls of the departed children to have free and uninterrupted passage to travel from the deceased children across the land to their destination beyond.
* these "souls" of the departed had been seen on other occasions and were small beings.

On his trip to the fishing spot, the project manager drove clear of the funeral site but in passing by he noticed a red glowing in the bushes to his right.

Then without warning 2 pink creatures walked out into the middle of the road in front of him. They turned and looked at him and then continued on their way.

He described the 2 beings as follows:

* 2 pink humanoid beings that were about 3 feet tall and emitted a clearly visible red glow;
* as well as the red glowing, they were also shiny as if coated in oil of some sort;
* they were totally naked and hairless with large eyes;
* (Apart from the large eyes, the project manager did not mention any other facial features or appendages).

MY PERSONAL COMMENTS: A couple of important points emerge here:

The indigenous aboriginal people (in their minds) fully believed that the souls of the departed would walk over the land after the death of tribal members .... and that these "souls" were small pink beings..... which then leads one to believe that has occurred many times before in the past, thereby reinforcing the belief!

Is this an incredible coincidence or something more sinister?

The case for coincidence:

* that 2 young children died, and 2 strange beings appeared by chance on the day of the funeral.

The case for something sinister:

* Two beings planned to appear at a certain time in a certain place but needed to mask their appearance as "souls" of departed children, and therefore "arranged" the deaths of the 2 infant children to provide the said cover.

The case for grasping an opportunity:

* That 2 children died of natural causes and the 2 beings grasped the opportunity to appear, knowing that the local aboriginal people would see them (the 2 beings) as the souls of the departed children (and thereby providing the cover the beings desired).

For a fascinating snapshot of Australian rock art that may or may not be relevant to the "pink spirits" encountered. 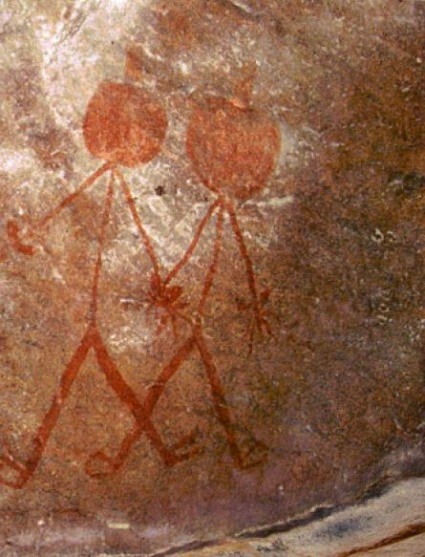 NOTE: A humpy was a small, temporary shelter made from bark and tree branches, traditionally used by Australian Aborigines, with a standing tree usually used as the main support. The word humpy comes from the Jagera language (a Murri people from Coorparoo in Brisbane); other language groups would have different names for the structure. Lon