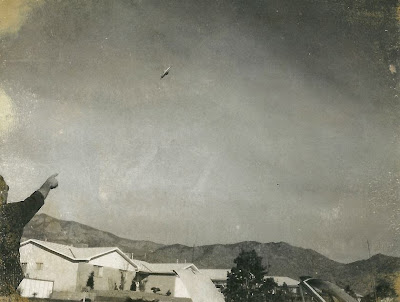 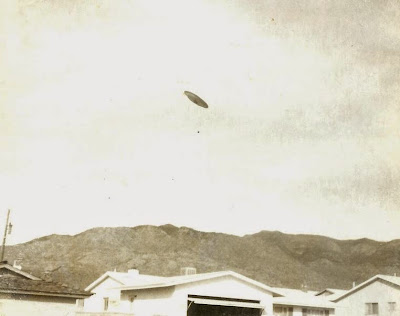 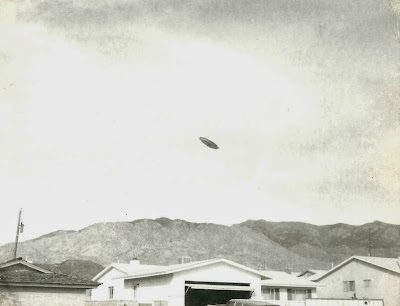 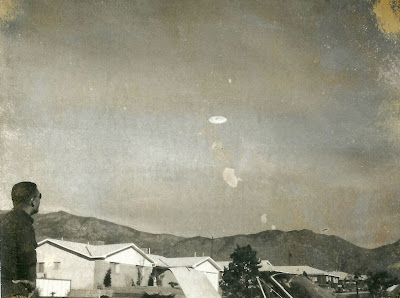 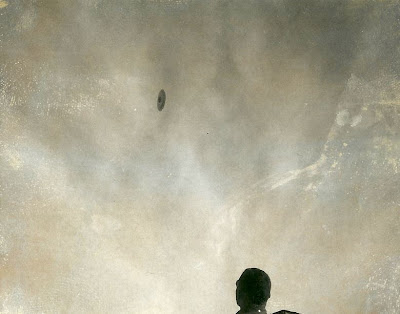 Albuquerque, NM: I made a report of this a week ago, but the photo attachments didn't work so I'm trying again. My wife and I found these 5 incredible daytime disc polaroid photos in an old photo album belonging to her grandfather, who was a captain in the air force and was stationed in Albuquerque, NM from 1961-1965. the man seen in the picture pointing to the object is my wife's grandfather. I scanned these photos in and blew them up and they are very compelling. If it was a hoax, it's a good one. - MUFON CMS 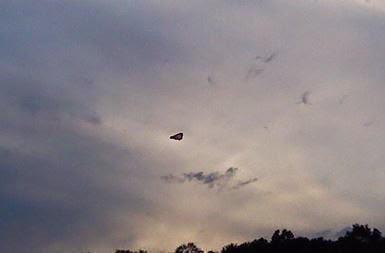 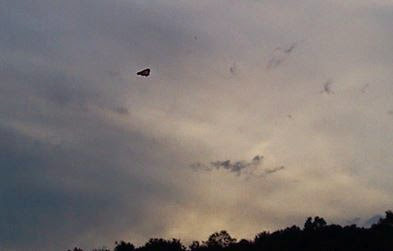 Clearfield, PA - 9/20/2014: these pics were taken by ex law enforcement and I promised not to give his info so he sent me the pics and here I am. HE was gardening and was from the corner of his eye and snapped 2 pics before it flew off. MUFON CMS

A swarm of bees has killed a man in Arizona and sent another to hospital.

The two were working at a house in Douglas, a town on the border with Mexico, when they were attacked.

They were part of a group of four cutting grass and weeding for the owner of the house, a 90-year-old man who was not stung, news reports said.

According to the Arizona Republic, one worker had collapsed and was in respiratory arrest by the time then emergency medical personnel arrived at the scene.

He died at the hospital. The other was stung about 100 times, the newspaper said.

A beekeeper later exterminated it after parts of the roof of the home were torn off.

The Fire Department used foam and pesticide and cordoned off several blocks of the street for several hours.

Authorities have warned neighbours to be alert.

The landscapers worked for an association called The Douglas Arc, a group of people with developmental disabilities, CBS reported. They do landscaping work around town. - SKY

Manned mission to Mars: Will astronauts hibernate their way to the Red Planet?

With travel to Mars taking upward of 180 days – one way – NASA is considering the possibility putting astronauts into a medicated deep sleep for the trip.

Torpor, a state of reduced physiological activity, would reduce astronauts’ metabolic functions, and costs, according to a NASA-backed study conducted by Atlanta-based aerospace engineering firm SpaceWorks Enterprises. The physical inactivity paired with intravenous feeding might mean a crew could essentially be put in hibernation during transit to Mars.

Torpor occurs naturally when a human experiences hypothermia, but hospitals have been using it to treat patients for more than three decades.

“Therapeutic torpor has been around in theory since the 1980s and really since 2003 has been a staple for critical care trauma patients in hospitals,” aerospace engineer Mark Schaffer of SpaceWorks Enterprises told the International Astronomical Congress in Toronto this week, according to Discovery News. “Protocols exist in the most major medical centers for inducing therapeutic hypothermia on patients to essentially keep them alive until they can get the kind of treatment that they need.”

Taking measures to reduce human activity are prompted by questions of how to minimize the crew “footprint” on space habitat architecture. Theoretically, sleeping astronauts would require less food, water, and oxygen, thus significantly cutting the price tag on a six month journey. It could also eliminate ancillary crew accommodations including food galley, exercise equipment, and entertainment.

But the longest period a patient has ever been held in torpor has been limited to two weeks, according to the report.

“For human Mars missions, we need to push that to 90 days, 180 days. Those are the types of mission flight times we’re talking about,” Schaffer told Discovery News.

Humans who have undergone multiple torpor induction cycles have reported no negative or detrimental effects, according to the SpaceWorks study.

The study indicates a fivefold reduction in the amount of pressurized volume and a threefold reduction in mass required for a crew. A crew in stasis could almost halve baseline mission tonnage requirements to about 220.

The approach is based on extending the current and evolving medical practice of therapeutic hypothermia, a proven and effective treatment for various traumatic injuries that lowers a patient’s body temperature by 5 to 10 degrees Fahrenheit causing their metabolism to reduce significantly and the body to enter an unconscious state.

The Mars-bound astronauts would then be intravenously fed a mixture containing all essential nutrients for a human to function through a process called total parental nutrition (TPN). Muscle atrophy could be remedied through automated physical therapy tools and neuromuscular electrical stimulation (NMES).

The crew would be cycled in and out of stasis such that one crew member is conscious at all times during the transit, yielding minimal impact to the habitat.

The study also pointed to potential psychological benefits for astronauts:

“It is reasonable to assume that the crew’s mental well-being will be substantially improved by effectively eliminating the 400 days spent in transit to and from Mars. They will enter the torpor state upon Earth departure and awake in Mars orbit approximately 200 days later. This can avoid many of the challenges with crew compatibility, potential interpersonal conflicts, boredom, and depression.”

Although more research and review is still required, to date, the team has found no “show-stoppers.” - CSMonitor 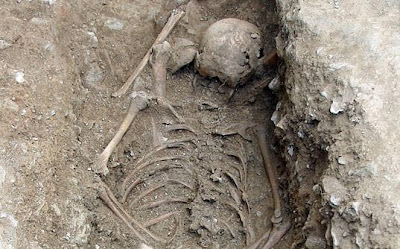 An archaeological dig in northern Italy has unearthed the remains of a 13-year-old-girl buried face-down -- evidence, archaeologists say, that despite her young age, she was rejected by her community and seen as a danger even when dead.

Dubbed by Italian media as “the witch girl,” the skeleton was unearthed at the complex of San Calocero in Albenga on the Ligurian Riviera, by a team of the Pontifical Institute of Christian Archaeology at the Vatican.

The site, a burial ground on which a martyr church dedicated to San Calocero was built around the fifth and sixth centuries A.D., was completely abandoned in 1593.

The prone burial, which has yet to be radiocarbon dated, is thought to date from the late antiquity or the early Middle Ages.

“These rare burials are explained as an act of punishment. What the dead had done was not accepted by the community,” said Stefano Roascio, the excavation director. Like other deviant burials, in which the dead were buried with a brick in the mouth, nailed or staked to the ground, or even decapitated and dismembered, the face-down treatment aimed to humiliate the dead and impede the individual from rising from the grave.

“In particular, the prone burial was linked to the belief that the soul left the body through the mouth. Burying the dead face-down was a way to prevent the impure soul threatening the living,” anthropologist Elena Dellù told Discovery News.

In extreme cases, a face-down burial was used as the ultimate punishment, with the victim horrifically buried alive.

It wasn’t a treatment used on the teenage girl, however.

“The skeleton’s position rules out this possibility,” Dellù said.

Found with her hands placed on the pelvis and straight and parallel legs, the girl showed no apparent signs of a violent death in her bones. However, Dellù noticed porotic hyperostosis on the skull and orbits. These areas of spongy or porous bone tissue are the result of a severe anaemia.

“She could have suffered from an inherited blood disorder such as thalassemia or from hemorrhagic conditions. More simply, it could have been an iron lacking diet,” Dellù said.

Standing just under 5 feet tall, the young girl somehow scared the community -- perhaps it was just her pallor, her possible hematomas and fainting.

Intriguingly, her disrespectful burial was found in a privileged area, just in front of the church.

“This makes the finding even more unusual. A similar case of a teenager buried face-down in front of a church was found at the archaeological site of Pava near Siena,” Roascio told Discovery News.

“A precise dating of the skeleton and further research on similar burials might help in finding more clues,” Roascio said.

According to Caroline Arcini of Sweden's National Heritage Board, prone burials are not as rare as it may seem and have occurred across the world from 26,000 years ago up to the early 20th century.

The author of the first global study on face-down burials, Arcini has recorded more than 600 bodies who had suffered the indignity of a face-down burial from 215 grave sites. Such data suggests the phenomenon is “a conscious act, a deep-seated form of human behavior occurring in all cultures and religions,” Arcini said.

“There is a clear pattern indicating that prone burials were used for those who were different,” she added.

The researcher also recorded a case of a prone burial in front of a church.

“It was an individual male dating to the medieval period. He was killed by both sword and crossbow,” Arcini told Discovery News.

“He was buried in a cist and a bracelet partly made of gold around his wrist indicated that his social position was high,” she added. - Discovery

Do We Gotta Get Water from the Moon?

Abundance: The Future Is Better Than You Think

The Map of Heaven: How Science, Religion, and Ordinary People Are Proving the Afterlife

The Future of the Mind: The Scientific Quest to Understand, Enhance, and Empower the Mind