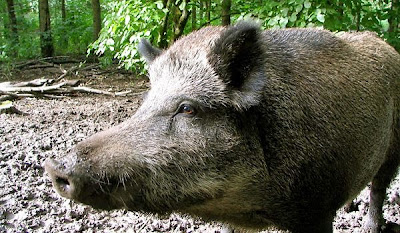 Can Wild Pigs Ravaging the U.S. Be Stopped?

For centuries wild pigs caused headaches for landowners in the American South, but the foragers’ small populations remained stable. In the past 30 years, though, their ranks have swollen until suddenly disease-carrying, crop-devouring swine have spread to 39 states. Now, wild pigs are five million strong and the targets of a $20-million federal initiative to get their numbers under control.

Settlers first brought the ancestors of today’s pigs to the South in the 1600s and let them roam free as a ready supply of fresh pork. Not surprisingly, some of the pigs wandered off and thrived in the wild, thanks to their indiscriminate appetites.

Wildlife biologists can’t really explain how pigs from a few pockets were able to extend their range so rapidly in recent years. “If you look at maps of pig distribution from the eighties, there's a lot of pigs, but primarily in Florida and Texas,” says Stephen Ditchkoff, a wildlife ecologist at Auburn University. “Today, populations in the southeast have exploded. In the Midwest and the north it's grown to be a significant problem.” Ditchkoff believes sportsmen transported the pigs so they could hunt them on their land. Read more at Scientific American


Swedes Could be Searching for Covert Russian Midget Sub

The mystery submersible spotted in Swedish waters near Stockholm on Friday could be one of a handful of Soviet-era midget submarines operating from a mother ship in the Baltics and not likely a larger Russian Navy submarine.

Since Friday, the Swedish Navy has been operating a large-scale search following reports of “foreign underwater activity,” near the Swedish capital employing several patrol craft and a Visby-class corvette.

The Swedes have doubled down on the hunt expanding the search area for the mystery craft that could be, “a submarine, or a smaller submarine… It could be divers using some form of moped-like underwater vehicle and it could be divers that do not have any business on our territory,” said Swedish Navy Rear Adm. Anders Grenstad earlier this week.

Though the Russians have denied any involvement, the presence of a Russian-owned cargo ship, NS Concord, acting suspiciously in the Baltic and reports of encrypted transmissions on a Russian emergency channel toward the Russian naval base at Kaliningrad originating near Sweden point toward the operation of a Russian midget sub.

“Speculation that the suspected Swedish contact could be a midget submarine is certainly plausible. Midget submarines can be launched covertly from beneath larger vessels ,” according to a Tuesday analysis in Jane’s Defence Weekly.

Concord was spotted moving in a zigzag pattern in Swedish waters, “as if in a search or rendezvous pattern,” reported Jane’s.

Concord was off the coast of Estonia and steaming in the direction of St. Petersburg, Russia as of Tuesday afternoon, according to MarineTraffic.com.

One possible suspect is a Soviet-era midget submarine used for insertion of special operations forces (SOF) that Russia has been marketing for export.

“Russia has renewed its interest in midget submarines, including the Project 865 Piranha-class (NATO reporting name Losos) vessel, two of which have been based in the Baltic in the past. They are exceptionally quiet, stealthy, and with a low detection signature,” wrote Jane’s.

The Piranhas displace a mere 390 tons submerged and can carry a compliment of nine crew and six combat divers, according to the U.S. Naval Institute’s Combat Fleets of the World.

The diesel-electric submarines have a reported ten-day endurance.

The Soviet-era Piranhas were built in the 1980s and stricken from the Russian fleet in 1997, however at least one may have been upgraded for use as a technology demonstrator for potential foreign sales, according to Combat Fleets.

Other experts have speculated the submersible could be a Project 908 Triton II swimmer delivery vehicle (LSDV), a 6-ton craft capable of delivering six combat divers with a range of 60 nautical miles.

But as the search continues, the prospect of a Triton as the suspected craft is less likely given the sub’s 12-hour endurance.

The suspected craft was first spotted on Oct. 17 and again on Oct. 20.

Since then the Swedes have expanded the search pattern to include a wider swath of territory toward the South. - USNI

The next reversal of the Earth's magnetic field could happen within the next couple of thousand years.

For some time now there have been signs that our planet's magnetic field could be preparing to undergo a complete reversal, a change that would see the North Pole move to Antarctica and the South Pole move to the Arctic.

While magnetic field reversals have occurred on a regular basis throughout Earth's history, the next one will be the first to take place in almost 800,000 years.

Scientists believe that the flip cycle will be preceded by a weakening of the magnetic field, something that recent measurements have indicated is now actually happening. There's no telling however exactly when the reversal itself will take place so it may still not occur for several thousand years.

"We don't really know whether the next reversal is going to resemble the last one, so it's impossible to say whether we're just seeing the first of possibly several excursions (slight movements), or a true reversal," said Paul Renne, director of the Geochronology Center at the University of California.

When it does happen however scientists believe that, far from lasting several millennia, the actual flipping of the magnetic poles will only take around 100 years to complete. Read more at Fox News

Leading paranormal investigator Jonathan Bright will travel from his home in Greece to Scotland to deliver his views on an intriguing image he captured in late 2011 of a strange “monstrous head” coming out of the waters of Loch Ness.

The picture was published in 2013 and has since led to a great deal of discussions and analysis.

Its impact on what is known about the legendary monster will be a key theme explored by Mr Bright at “Is Nessie Paranormal” during the Paranormal Festival in Stirling from 30 October to 2 November.

As well as delving into the picture itself, the audience will be taken on a journey back into Loch Ness Monster folklore to discover similar views of new and past researchers in their effort to understand the “Nessie” phenomenon.

Talks, screenings and events at the festival will cover everything from UFOs to poltergeists and guests can even take part in a special UFO vigil at Bonnybridge.

After the festival Mr Bright will return to Loch Ness to launch a new investigation into the dark waters of this famous Scottish landmark.

“My travels for exploring legends and investigating mysterious phenomena have taken me to various places in Europe, but nowhere else have I felt so enchanted and connected with the place as at the mysterious Loch Ness,” said Mr Bright.

“It was only a brief trip in the Highlands, but on the day that I was actually cruising the Loch, my infrared camera had captured a picture that, in my opinion, proves that the ‘monster’ is much more than a tall tale.

“Of course, a picture alone will never be able to stand out as ‘unambiguous’ evidence, let alone provide adequate answers to all of our questions on the exact nature of the phenomenon that we call Nessie.

“This theme I will explore in my presentation, examining the possible scenarios, but mostly focusing on the idea that I find most intriguing, that Nessie may be some sort of a manifestation of the place itself. This idea of course is not new, there is a long tradition of researchers that have understood Nessie as some sort of ‘paranormal’ phenomenon.

“Whatever is the truth, there is no denying that Nessie will continue to intrigue the world for years to come.”

On 14 April 1933, Aldie Mackay, manageress of the Drumnadrochit Hotel, spoke of seeing a “whale-like fish” in the loch. Alex Campbell, a water bailiff and part-time journalist, recorded the sighting in the Inverness Courier, under the headline: “Strange Spectacle in Loch Ness”.

VisitScotland Chief Executive Malcolm Roughead said: “It would be difficult to overstate the importance of Mrs Mackay’s sighting of the Loch Ness Monster some 81 years ago to tourism in Scotland.

“There are few places in the world where people haven’t heard of the phenomenon and many have made the journey to the beautiful mysterious shores of this now famous Loch to catch a glimpse of Nessie herself.

“The Scottish Paranormal Festival is set to be a mystifying and intriguing few days. From ghosts to aliens, UFOs to vampires, it will be a chance to discover the fact behind the fiction and see if the truth really is out there and I would urge everyone to make the trip to Stirling.”

As part of the Homecoming Scotland 2014 partnership programme, the Paranormal Festival is set to draw visitors across Scotland and beyond. - Scotland Now

Is this the world's oldest secret code?

No, Bram Stoker Did Not Model Dracula On Vlad The Impaler

The Stargate Conspiracy: The Truth about Extraterrestrial life and the Mysteries of Ancient Egypt

Area 51 - Black Jets: A History of the Aircraft Developed at Groom Lake, America's Secret Aviation Base