I received this unedited information, that concerns the local Sasquatch population, from a reader (EW) who lives in an unspecified area along Washington's Puget Sound. I may present more from EW in the future:

Lon, here is a blog post I made just this week after another summer of amazing encounters and extensive photo shoots.

This summer we hiked about 50 times locally and took about 3000 photos of sasquatch and other forest critters. I've seen just about all there is to see and am ready to go on the record now. This is just my opinion.

While I think they are a mystical creature, I think there are limits. I do believe them to be a flesh and blood, warm blooded human/primate hybrid, however they grow old and die and can also be killed by accident or gunshots. They have some connection to cemeteries and I'm certain they bury their dead because this has been witnessed. They have great respect for their elders and they mourn when they die. Just like a walk through the International District of a city and the variation, squatch come in all kinds of looks, sizes and colors, some more primate looking, others more bear looking, dog looking and flesh faced human looking. They rarely run around uncloaked in the presence of humans. They cloak first, then move. They are up in the trees, they have scouts up there that mimic birds to disclose your location to other squatch. They have huts and underground bunkers where they live and sleep. They tend to be in the upper lands where it is dry, not down in the swamps. They hang during the day often along the waters edge. Their highways are the game trails that run along the creeks in the ravines where they can travel undetected, especially at night. The staple of their diet isn't deer or elk as there is nowhere near enough to sustain the massive population, not mention I have four deer in my orchard that are still alive a couple years later. The staple of the squatch here I believe to be some root they forage.

Their 'mystical abilities' aren't magical, just abilities that have developed through their independent evolution. Mindspeak/telepathy. This is two way. They can hear your thoughts and plant thoughts, questions and visions directly in your head. This is done in English. They are multilingual, at least Salish (their language) and English, as well as a myriad of animal mimics. I hear squatch in the SW can speak Spanish as well. Zapping. Believe this to be some sort of electrical transmission to the pineal gland. It is used offensively to stun prey like deer and stun humans for abduction (involuntary sex partners). It is used defensively to stop you if you are getting to close to them. Zapping is person or animal specific. You can be standing next to a friend and they will zap your friend and not you. They did. Twice this summer! Cloaking and the ability to appear invisible. On the fence whether this is the bending of light or a vibrational thing. Young children squatch can't cloak on their own, though they can be cloaked if an adult touches them or holds them. It develops later in their life. Scent release. They don't inherently smell, they smell when they want to smell. It is a defensive mechanism to let you know they are there and to move you out of the area from fear. They, like us, create maps, use tools and create art (mostly sculptures). I believe they have the ability to use fire, but don't to avoid detection, which is their primary motive. Shape shifting/morphing. I have photographic proof that they morph from flesh and blood into stumps and do so often. It appears they do the same with rocks, water and trees. Native American stories support this. I heard about it long before I witnessed it in real time. It only takes 10 to 15 seconds for a squatch to cloak or shapeshift. Tagging. When they decide a human is safe, they can tag them. All the other squatch, even clans a hundred miles away somehow know you have been tagged safe. And it's almost like a GPS chip. They know where you are and will come visit you, even miles from their homes. Interdimensional travel. I have enough eyewitness experiences personally to say they have the ability to move in a 4th, 5th, infinite dimensions beyond our 3 dimensions. They can go back and forth from our sensory world to areas outside our visual, auditory, vocal and olfactory ranges, as well move through portals. Where they go, I don't know. They come in from out of nowhere and exit out of nowhere. There are other creatures that travel through these portals with them. I've seen them come in and I've seen them physically manifested by their side in full flesh and blood form. They appear to be allies, not enemies. I now in photographs have documented over 20 other species not in any textbooks, but consistent with legends and fairy tales, like wood sprites, trolls under bridges, goblins, ghouls and ghosts.

That is, from what I can tell, where their special abilities end. I would like to find out more about their portal travel, diet, language, life expectancy and their vulnerability to disease, from small pox to cancer. This year, especially this summer, has been a real eye opening experience that has really expanded our understanding of these amazing beings. - EW 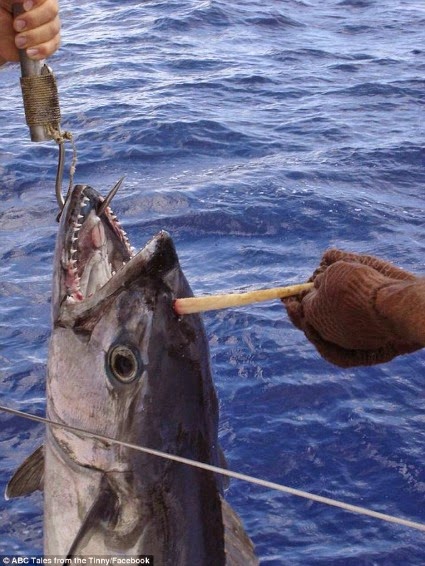 Veteran fisherman Kim Haskell has been fishing all his life, but had never seen anything like the catch he and his family snagged while out fishing past the Great Barrier Reef. Kim, 64, a fruit grower from Bloomfield, Queensland was on a fishing trip with his brother Jamie and nephew Christopher near Osprey Reef in the Coral Sea, off the Queensland coast.

The trio rose early and had already caught several tuna off the side of the 18 meter boat when Christopher reeled in an enormous dogtooth tuna. However, it was not that the tuna weighed in at a whopping 40 kilograms that drew the keen anglers’ attention, but the fact that the fish had a giant horn sticking straight out from its head. Read more at Daily Mail

Brooklyn, NY - 2014-08-04: I was driving on the Verrazano Bridge and this space ship came out of nowhere, in the middle of the night, and it stopped, hovered over me shined a light next to me and the car next to me swerved and then swerved again and the light followed it, and the car just kept on moving and the ship wen down to one of the pillars on the bridge and then it did like a u turn and it was big, like really really big and i got scared and called my friend but i did not say anything to her, and the ship went out of like control and sped way off into the south west before turning east toward Coney Island Park. then it sank out of the view and onto the horizon. - MUFON CMS

NOTE: This may help to verify other related sightings in and around Brooklyn and Rockaway Beach in early August. Lon

Hey folks...the 'Mantis Man' segment for Destination America's 'Monsters & Mysteries in America' is progressing well, according to the producer. So...I believe you can expect to see this in the next season. Lon 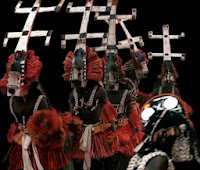 The Merkabah Vehicle and Inter-Dimensional Travel

This Politician Better Watch Out For Gremlins

The Buzz on Big Bloody Bee Vs. Bee Battles

The Elegant Universe: Superstrings, Hidden Dimensions, and the Quest for the Ultimate Theory

God and the Multiverse: Humanity's Expanding View of the Cosmos

We Are Not Alone: A Complete Guide to Interdimensional Cooperation

Parallel Worlds: A Journey Through Creation, Higher Dimensions, and the Future of the Cosmos