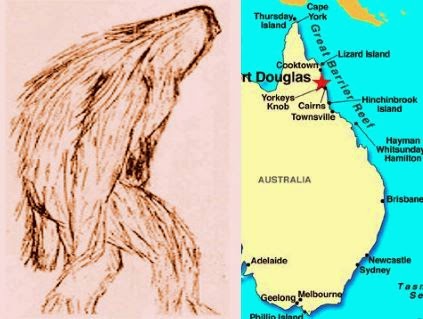 Port Douglas is on yowie watch after a man reported a terrifying run-in with an unknown creature last week.

Sightings of yowies – or bunyips and quinkans, as they are known by Aboriginal people – have been reported since early European settlement and appear in ancient Australian cave paintings.

But Wonga Beach man Brad Brown is still shaken after his encounter last week with something resembling an ape.

“I was driving home from work about 10.30pm and I was on the Rocky Point range going around a bend when suddenly something ran in front of my car,” he said.

“I didn’t know what I saw, it was big and really hairy with an oblong-shaped head.

“Its arms were hanging behind it as it ran.”

In another incident just over a year ago, a Port Douglas man, who did not want to be named, said he and a mate still can’t explain what they saw.

“We were fishing at Mowbray (7km south of Port Douglas) about 2am,” he said.

“It was all quiet when suddenly we heard this noise. It was a noise I had never heard in my life – like a growl but not like any animal I know.

“I freaked out. I went to cut the line and actually cut my rod in half. I started the ute before my friend even moved.

“We reversed out as quick as we could onto the road and I had the spotlight on.

“Then suddenly it was on the bridge going very fast.

“It had dark brown hair, coarse and thick like a dog’s, its arms were flying behind it.

“When I got home, I locked the door and the made sure the kids were safe and locked in their rooms. My partner at the time didn’t quite believe me, but she could see something had rattled me.”

Kuku Yalanji traditional owner and elder Linda Burchill said quinkans had been known to appear because something had disturbed them or sacred sites, and it could be anything from land development to the recent lunar eclipse. - Cairn Post

NOTE: I have received Yowie / Bunyip reports from the Mowbray area over the years. Most were witnesses hearing unknown sounds. Lon

The Earth's Magnetic Field Could Flip Within Our Lifetime

Earth's magnetic field is constantly shifting, and roughly every 200,000 to 300,000 years it flips north and south completely. We're currently overdue for a switcheroo—and scientists now say it could happen in a time as short as 100 years, potentially altering life in unexpected ways.

It was long thought that these reversals took as many as 7,000 years to completely switch, according to a 2004 study funded by the National Science Foundation. But over the past few years, other scientists have suggested that the shifts have occurred at speeds previously unimagined. And a brand-new study published in the Geophysical Journal International by a team of scientists from Europe and the U.S. sheds even more light on these speedy changes—suggesting that the last 180-degree flip only took about 100 years.

How did they discern changes in the magnetic field that date back hundreds of thousands of years? By testing layers of ash deposited by volcanic eruptions over the course of 10,000 years, found in a lakebed near Rome. According to a release from Berkeley, the magnetic field directions are "frozen" into these layers of ash, which could be reliably dated to find out when the reversals occurred and how long they took to complete. "We don't know whether the next reversal will occur as suddenly as this one did, but we also don't know that it won't," said Berkely's Paul Renne, one of the study's authors. Read more at Gizmodo

Beings in My Bedroom

Starr, SC - 10/13/2014: I was in my bedroom sleeping and awoke. I looked up and saw an 5ft being on my wife's side of the bed. Greenish gray skin like a prune in texture with dark wrinkles, large white eyes with large black pupils. The head shape reminded me of a prune it had only molars and a dark colored robe.

I wasn't frightened for some reason. I kept opening and closing my eyes to make sure of what I saw. On my side of the bed on the top of the wall and ceiling there was an spider like robot about 2 feet in diameter. I felt like it was some type of observation device. I wasn't frightened of this ether. The being looked at me and moved its lower jaw and that is when i saw its teeth then they both slowly vanished away in a few seconds. Oddly i felt like i was sedated and fell back to sleep.

I have drawn an image of both. (not provided with report)

Has this happened to anyone in my area? 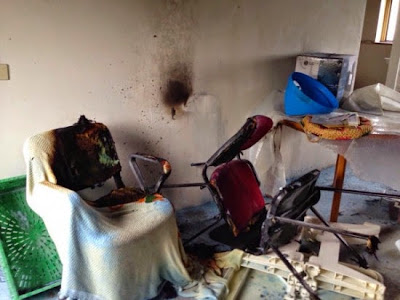 For 10 years, the residents of the Sicilian village of Canneto di Caronia have been utterly spooked by hundreds of mysterious, unexplained fires that seem to erupt out of nowhere. The bizarre phenomenon, which has seen a sudden surge this year, includes spontaneous combustion of mattresses, beds, cars, and devices like fridges and mobile phones, even when switched off.

The episodes have attracted the attention of geologists, physicists and volcanologists for several years, but no one has been able to provide an accurate scientific explanation so far. Naturally, the villagers are blaming supernatural entities like UFOs, poltergeists, or other demonic forces. And with no other logical reason in sight, one tends to wonder if they actually might be right.

It all began in January 2004, when, without any apparent cause, appliances (including a cooker and a vacuum cleaner) in several houses began to catch fire. Wedding presents, random pieces of furniture, and even a water pipe erupted into flames. In response, the local electric company tried cutting off the power supply to Canneto, but that made no difference. The village was evacuated and a through investigation was conducted, but the experts and authorities simply failed to locate the problem.

Even with the arrival of volcanologists from the National Institute of Geophysics and Volcanology, and a team of experts from the Italian Navy, no viable solution was found. Understandably, the villagers were terrified, and a few of them even suggested calling in a priest to conduct an exorcism. Months went by, and a period of calm followed, when most of the villagers returned to their homes.

Unexplained fires still occur from time to time, and the villagers have pretty much learned to live with them. Other bizarre events have taken place as well - there were unexplained leaks from water pipes of three different houses, a vanity mirror in a bathroom caught fire three times in 35 hours, and an entire plantation of eggplants developed rainbow-like colors, making them unfit to be sold.

Air conditioners have spontaneously melted, car glasses have imploded, hard drives have been erased, automatic gates started opening and closing randomly, and animals have died mysteriously. Without any science to explain these events, it’s easy to see why the whole affair appears sinister. I’d be pretty terrified too if I were living in Canneto.

In April 2005, the Italian government created a special Task Force (of high-ranking army officers, engineers, architects, geologists and physicists) to investigate the situation in the sleepy little village. The group conducted an extensively thorough analysis – aerial photo-remote sensing, assessment of geophysical and geochemical data, detection of magnetometric and electromagnetic fields, radio-electric spectrum monitoring, and more. The results, however, were inconclusive.

In 2007, an Italian newspaper published a leaked interim report from the Civil Protection Department, concluding that the only plausible explanation was ‘aliens’, because the fires were ‘caused by high power electromagnetic emissions which were not man-made and reached a power of between 12 and 15 gigawatts’. A year later, the case was dismissed following further investigation – they just attributed it to an ‘unknown electromagnetic radiation’.

But in the absence of tangible evidence, people have returned to supernatural theories. Sicily’s council member for health and safety, Vittorio Alfieri, said in an interview that the fires were caused by ‘an entity’ that ‘transfers from one house to another’. “A house on the ground floor caught fire then it was the turn of objects on the first floor,” he said. “Consequently, the fire moved to a nearby house. It was like moving.”

Now, after a period of respite, the inexplicable fires have returned to plague the citizens of Canneto. On September 30th, a series of fires were reported throughout the otherwise peaceful settlement. First, a chair covered in cellophane caught fire for no apparent reason. Hours later, someone else called the fire department to report a stack of folded clothes had burst into flames, and then an entrepreneur who was getting ready to drive away in his car but returned to get something he had forgotten from the house, found his vehicle burning. A book and a sofa were also found scorched for no apparent reason in different areas of the town.

According to media reports, the locals have once again been evacuated, while a small team of fire fighters have been assigned to control the small fires.

Several fantastical theories exist – some have even gone as far as claiming that this could all be the work of a single individual who suffered strong emotional distress at a young age (a lot like Stephen King’s Carrie), and is now attracting the curiosity of UFOs. Well, there’s no limit to human imagination, and unless a real scientific explanation emerges, each theory is just going to be wilder than the next. - Several sources, including IB Times, Veterans Today, Blasting News, Oddity Central

An Abductee Outsider Artist’s Tender Documents Of His Extraterrestrial Romance

The Haunted States of America: Iconic Ghosts of the Union (Infographic)

Killer Clowns Are Coming: The Real Story Behind the Legends

Ebola Survival Handbook: A Collection of Tips, Strategies, and Supply Lists From Some of the World's Best Preparedness Professionals

Spillover: Animal Infections and the Next Human Pandemic

The Hot Zone: The Terrifying True Story of the Origins of the Ebola Virus

The Coming Plague: Newly Emerging Diseases in a World Out of Balance