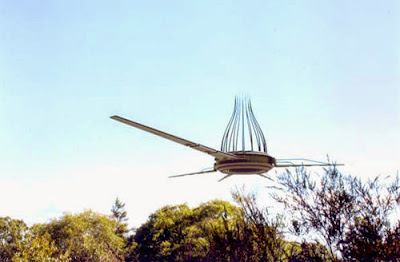 We were moving South on the 101 hwy in 2008 in the Summer time coming from the Heceta Head Lighthouse. My husband and I pulled off the hwy. to explore the beach. We were in an area notorious for very high winds and this day was no exception. There must have been a low cloud cover because the sky was void of color and was a sort of misty white. I started taking photos before we got to the beach. When I looked up I saw this oval shaped craft that seemed to have a slightly bowed bottom. I haven't seen anything like it and it didn't look like a blimp and it was definitely not the shape of a weather balloon. I said to my husband "my god" do you know how big that thing is? I saw no lights but only this white craft against a whitish background. Despite these horrific intense winds it was motionless and, from where we stood, it was soundless. We went down to the beach for a short while and when we got back, to my amazement, it was still there. My husband said "let's get outta here". I drove. We proceeded South down the 101 and my side of the windshield turned white. It wouldn't clear inside or out. There seemed to be some sort of substance on it because I could hear my wipers scrape it. My partners side was fine and I was driving in the blind. I could hear vehicles whizzing by and the only way on this curvy road to navigate was by sound. I rolled down my side window but I couldn't see through the white nor could I see the road at my side. I listened how close vehicles were on the side of me and in back of me. For the life of me I do not know how I navigated the curves on this road without going over the side and off the edge. When I travel a considerable distance like this my windshield cleared up quickly and I thought "my God, I'm alive, I'm alive".

When we got home I turned on the news immediately and, just as I did, the news reported that witness have seen a UFO in the same area that I photographed the image that I am enclosing. I looked at my photo but I believe due to the lighting the image didn't show in the photograph. I started messing with the brightness and toned it down a bit and lo and behold there it was. Within this same week another UFO of a much different shape was reported in Northern California. The picture of the California UFO was borrowed from another site but none-the-less it looked exactly the same.

In order to finish this report I needed a month and day but I don't remember what they were so I'm just posting something. We were on Summer vacation.

In the first two pictures where the UFO appeared over the bridge the pic on its side is the original, in the second one the brightness was toned down which reveals the UFO and the 3rd pic is the image that looked like the UFO reported in California. - MUFON CMS

NOTE: The Issac's CARET Drone sighting of 2007 was determined to be a hoax. This witness says she saw a similar object. Lon 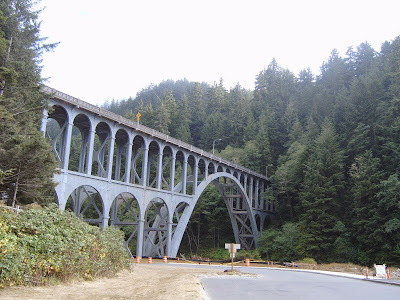 I got off the train as I usually do, but as I did I felt different, as though something wasn't quite right. I passed it off at the fact I didn't have a train ticket as the conductor never came around and carried on walking, the overwhelming sense that something was wrong still persisted as I walked out of the station front.

It was surprising light out for the time of morning, it was 8am but as it's coming to the winter I expected it to be dark as it was when I boarded the train. My stomach started to feel a little queasy but I hadn't eaten in the morning so I just shrugged it off as being hungry.

As I was walking down the road from the train station to the tram stop I always walk past this building that I had an interview for, my ideal job, the job I wish that I had at the moment and I'm currently waiting for a position to open for. I hate walking past because it makes me dream of "what could of been" if I just researched the company more before my interview, as I was approaching I spotted a familiar face in the crowd, wearing a full suit, around my age, late teens early 20's, he had a pass around his neck for the building (Of my dream job) and a short style hair cut like I do, I felt drawn to this person, almost like every step he took to dodge through the crowd that I had to mimic so I could stay aligned with him as we walked towards each other.

As he got closer I was completely shocked, he looked identical to me, it was me, but it couldn't of been me because I'm me, it really shook me, it stopped me in my tracks and I looked directly at him, although he looked right through me like I didn't even exist, he turned into the building and scanned his pass at the door, I just stood there in a busy city street as people brushed passed me, confused, shocked, excited..? I'm a realist, I don't believe in the paranormal, I didn't believe in the paranormal? I'm not sure anymore. All I know is that person was, is? Me. A twin maybe? Separated a birth, but how has he got that job that I applied for and wanted so much. I'm going to look out again tomorrow to see if he walked into the building again and possibly approach him, I'm skeptical about this, maybe I was just tired. Surely it cannot be possible for two entities of the same personality, looks, goals, aims and life objectives to exist within one world? - Reddit.com

Massive numbers of the seaborne mammals hauled themselves on to the shoreline for a bit of a rest.

The amazing spectacle was captured on camera by National Oceanic and Atmospheric Administration (NOAA) biologists who were flying five miles north of Point Lay as part of their annual Arctic marine mammal aerial survey.

Such huge congregations are becoming increasingly common due to global warming which is causing large swathes of sea ice to melt far further north than would otherwise normally occur.

Unable to swim indefinitely, the walruses usually rely on this sea ice to rest, but with so much of it gone they are now being forced to head to the shoreline in huge numbers.

"The walruses are telling us what the polar bears have told us and what many indigenous people have told us in the high Arctic," said Margaret Williams of the World Wildlife Fund.

"The Arctic environment is changing extremely rapidly and it is time for the rest of the world to take notice and also to take action to address the root causes of climate change." - Independent

Could disappearing Arizona house have been a UFO?

Arizona witnesses at Sierra Vista recalled events from 2012 when a rectangular object sitting in what had been an empty field disappeared by morning, according to September 29, 2014, testimony in Case 60151 from the Mutual UFO Network (MUFON) witness reporting database.

The reporting witness and her husband had stepped outside about 9:45 p.m. on a clear December night in 2012 before heading to bed when they noticed the object in a nearby field.

“We were only out there about a minute before we noticed what appeared to us to be a single-wide mobile home or rectangular-shaped house in the field across the street,” the witness stated. “This field is totally fenced in and there has been nothing there for several years so we were surprised to see a house. We hadn’t heard anything during the day nor seen any movement /trucks bringing in a house.” Read more at Open Minds 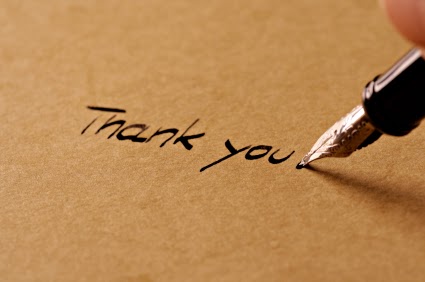 NOTE: I want to again thank those readers & supporters who have graciously donated to 'Phantoms & Monsters'...it makes me feel appreciated for the time I devote to the blog and newsletter. Lon

The Ghost Villages that Really Horrified Us

Urban Tunnellers - What Lies Beneath Our Streets?

The Distress of Waking Up Under Anesthesia

The Harbinger: The Ancient Mystery That Holds the Secret of America's Future

The Mystery of the Shemitah: The 3,000-Year-Old Mystery That Holds the Secret of America's Future, the World's Future, and Your Future!

The Field: The Quest for the Secret Force of the Universe