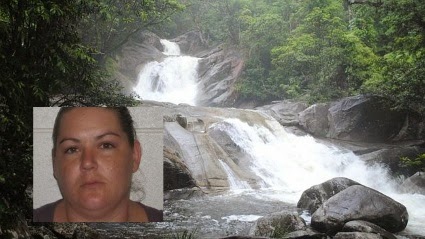 “There was no way she was gone,” Mr Cassidy told the ABC.

“I could always feel it in my heart that she was alive.”

Shannon Leah Fraser is still recovering in hospital after emerging from the bush in north Queensland after 17 days.

Ms Fraser is today undergoing surgery after her ordeal.

The 30-year-old mother-of-three will have an operation to remove stones and splinters embedded in her feet.

Her brother Dylan Fraser told the Courier-Mail his sister was also being treated for badly burnt skin which had turned black.

The Innisfail family had been inundated with media requests for a paid exclusive tell-all about her miraculous tale of survival, he said.

“She’s still in shock and traumatised.

“Shannon won’t be speaking publicly to anyone until she is feeling well enough.

“Doctors are still very worried about her physical and mental state

after such a hectic ordeal.”

Police say they are desperate to speak to the Innisfail mum to try and fathom how she survived 17 days in the wild while not being found by their search parties.

Far North Insp Rhys Newton has confirmed officers and other emergency services spent more than 800 hours looking for the 30-year-old after she disappeared near Golden Hole.

He said he had full faith that their search was comprehensive and it would not be until they spoke to Ms Fraser that they would understand how her whereabouts evaded them for more than a fortnight.

She was found at 8am on Wednesday, just 30 metres from the gazebo where she was last seen.

“I have every confidence in the search coordinators and I’m convinced that there was an extremely high probability of locating that missing person had she been in that area we were searching,” Insp Newton said.

“The effort of those searchers, particularly the SES volunteers, is extrodinary in the circumstances.

“Her movements have gone out of what we could reasonably expect a person who is lost in those circumstances.

“We’ll take whatever learning experiences out of this into other searches.”

She remains in Innisfail Hospital with reports she is “resting comfortably” and Insp Newton said they hoped to speak with her after her release which should be in the next couple of days.

Earlier, The Courier-Mail reported Ms Fraser stumbled out of the forest naked, covered in cuts, welts, bruises, and bites, and 16kg lighter in an incredible tale of survival.

“She’s lost lots of weight, she’s covered in cuts and scratches, but she’s in good spirits.”

The 30-year-old former cancer patient, who shed 16kg from her 90kg frame during her ordeal, is being treated at Innisfail hospital for severe sunburn, cuts, grazes and insect bites.

“She looks way skinnier, but she’s in a lot of pain,’’ her overjoyed daughter Takirah, 11, said after visiting her mum in hospital. “We’re just so happy she’s alive.’’

Ms Fraser told family how she came face-to-face with a giant cassowary, got chased by a 2m freshwater crocodile, and survived on fresh water alone because she had been warned against eating wild berries.

A Queensland Health spokesperson said: “Her condition and symptoms are consistent with an extended period in the bush.”

Doctors yesterday treated her for third-degree burns, welts from swarms of stinging black March flies, and swabbed dirt and stones out of her grazes and bare feet.

“She’d found the coloured markers left in the rainforest by the search teams and followed them back to the picnic area,” Mr Fraser said.

The mother-of-three vanished on September 21 when she became disoriented on a solo bushwalk from the Golden Hole swimming spot near Queensland’s highest peak Mt Bartle Frere, in far north Queensland.

Her de facto partner Heath Cassady, who reported her missing and headed a fruitless search effort for more than two weeks, said she told him she had headed up a creek and climbed up a high mountain ridge into thick jungle.

“Her whole body is scarred and peeling, she’s been through a lot,” Mr Cassady said. “It is amazing she’s still alive.”

He said the pair had been on a “bender” in the days ­before she disappeared and had gone to the swim spot to “chill out”.

“I was worried a croc had got her,” he said. “No one thought she’d hike all the way up into the mountains. She got a long way up.”

Northern Region Crime Co-ordinator detective Inspector Bruno Asnicar said it was a remarkable tale of survival, adding it would be three days before doctors would allow Ms Fraser to be interviewed by police. - Courier Mail

Duct Tape 911: The Many Amazing Medical Things You Can Do to Tape Yourself Together

The Zombie Survival Guide: Complete Protection from the Living Dead

Surviving Doomsday: A Guide for Surviving an Urban Disaster