Abduction and the Flash of Light 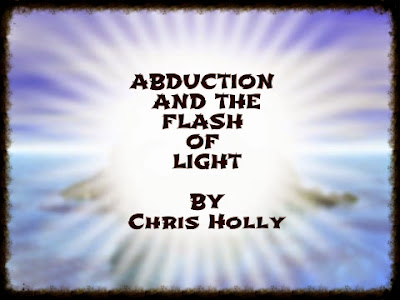 By Chris Holly - During writing lifetime I talked with many people who had experienced strange events where they encountered unidentified crafts and or life forms that would abduct them against their will and return them hours later leaving the abductee with a period of lost time they could not explain and no memory of what happened to them during the time they were missing. The people taken often remembered the start of the event and the end or becoming aware of their surrounding at the end of the event but nothing of what happened to them in-between.

There is one part of this type of abduction that all of the people I have spoken with share which is each one discussed seeing a ray of light of some type during the event and each person also told me that they could recall a very bright flash of light at point during the abduction . I have been told by about half of the abductees that they thought the experience with the extremely bright light occurred during the end of the abduction event but no one was positive of the timing only aware that they were shown or looked at an extremely bright light.

The second shared similarity that is reported by those who have had a lost time abduction event is that after the event they suffer with a sensitivity to bright light and need dark sunglasses to deal with a bright sun filled day. This sensitivity increases with the amount of events the abductee has had during their lifetime. Those taken many times over their life have extreme problems with light including night driving which becomes impossible for them if exposed over and over to the bright light that comes with the abduction experience.

I have seen this light as I have been one of those who have shared lost time events and now have extreme difficulty being able to see while out in the bright sun and cannot drive during the blinding sunset or at night without great difficulty.

I have written for years about how those taken have had some type of memory wipe of the hours spent while being abducted. I also have been fully aware of the fact that those who are kidnapped by whatever and whoever has the ability to do these things alter the people they abduct leaving them changed and often returned with physical ailments that stay with them for life or make them ill for a period of time after the event takes place.

You can imagine the upset that someone who has had to endure these things must feel when the world does not believe you and more painful refuses to help you leaving you on your own to deal with the horror of these abduction events and the physical aftermath alone and unprotected by their fellow humans. It is a ugly side of our society that continues to this very day.

Unless you have experienced an event where you are taken and used or abused against your will you cannot understand how awful it is to be one of those who are forced to deal with these things alone and without any form of help besides your own loved ones. And that is only if your loved ones are smart enough to understand what is going on. My heart sinks for those who have families who laugh at or do not believe those being abducted. Being completely alone and dealing with this horror has got to be devastating.

I went back over the past two decades of notes I have kept from the interviews and conversations i have had with abductees and realized that the subject of both rays of light and bright flashes of light were being reported over and over. I also realized that those who had more than one abduction also were the people who complained of serious sensitivity to sunlight or bright lights including night blindness due to the lack of being able to adjust their eyes to oncoming car lights. A few of the abductees suffered such severe damage to their eyes during their abductions that they are now losing their eyesight completely.

I knew all of these things however I was not able to place the factors of the bright light flashes or bright rays of light together with the missing memory until now.

One of the abductees I have written about in the past has since become a friend of mine recently sent me an article she found on line.

The article talked about the work taking place where researchers can erase memories in mice using flashes of light in a bid to uncover how our memory works and can be controlled!

It was an interesting article which I will post under my article on my blog however for me it was obvious that the flashes of light were part of the memory altering that takes place when humans are taken and abused by whatever or whoever is doing the abducting.

It is by no way a coincidence that human scientists are now using light in this way nor should we be surprised. I doubt there is anyone out there who does not at least suspect if not clearly know that the human race has been given or stolen a great deal of technology from the other life forms that have been visiting this planet most likely from the birth of the planet. Reading that a form of memory control and light is connected should have been obvious to me before. I laugh when I realize it was part of every Men in Black movie made. The fact they used the light flash may have been a joke on society placed in the movies by those who knew long ago that it was indeed the exact way our visitors control our memories.

I am sure there is a part of humanity, those elite few, who do know what is going on in this universe that know a great deal if not most of what happens to not only lost time abductees, but all those who are taken or have close encounters.

These elite few understand and freely approve of and go along with all types of abductions that take place to all the living creatures of earth including humans. The only ones kept in the dark are the mass of the world’s population that remain at the will and hands of the few and those who visit and do as they please with us.

At this point in my life I have learned by both research and personal experience that we know little yet live in a world filled with unknowns and unexplained events that we continue to ignore and let happen without questioning or are even normally curious about.

I believe in many things that seem impossible as I have lived and witnessed the impossible first hand. I also know we are being walked down a dishonest path by the powers that control this planet and realize we are simple pawns in a game none of us have any idea is being played out much less understanding.

All I can do is write what I see and share what I find and let you walk your own path of understanding what is going on around us all the time.
Enjoy each day but in doing so always pay attention to your surrounding and be careful out there as you never know when that light will flash in your direction!