The War Between Bigfoot Theories 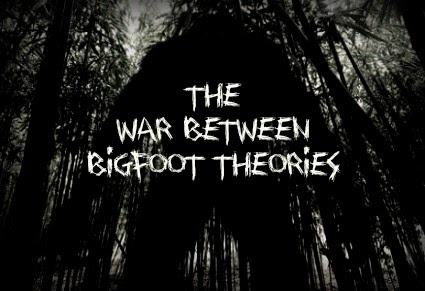 On Sunday evening, I had some extra time on my hands, so I decided to watch the newest episode of 'Finding Bigfoot.' This presentation was advertised as...

The team travels to Bobo’s backyard, Humboldt County, to investigate strange photos of a possible bigfoot among the Redwoods. Confident Bobo lives among the bigfoots, the team heads deep into the Redwoods using heavy metal vocals as bait.

Sigh...again, I was disappointed. I can put up with some of the typical nonsense, in particular Bobo's heavy metal vocalist friend screaming in the woods in an attempt to get a response from a Bigfoot. But once again, there was deliberate shunning of any sighting that suggests that Bigfoot may possibly be something other than a flesh & blood terrestrial being. BFRO's Matt Moneymaker specifically pointed out and discounted the 'wild' encounters described by certain witnesses at the town hall meeting.

Regardless of these efforts, a few traditional Bigfoot researchers are starting to accept the theory that the existence of these beings may be beyond our current perception. The continued lack of tangible evidence is fueling the argument that Bigfoot is more than a typical terrestrial entity.

Is it possible that ghostly creatures or cryptids may roam our planet? Could these be residual energies of previous living beasts, that manifest and present the effect of non-terrestrial or interdimensional beings. On the other hand, is there a chance that we are chasing corporeal entities that slip in and out of our plane of existence?

I remember the experiences of a well-known veteran Sasquatch investigator in the Sierra Nevada region who told me that he was watching one of these creatures walk away from him and then suddenly disappear. The terrain did not offer cover or camouflage and there was no direction that the creature could have taken without being seen. There were no caves or holes for the Sasquatch to duck into...it simply vanished.

A reader once stated in an email:

...that it's understandable that a subject as odd as this one, with the supposition that there is an enormous hairy creature that lives in forests around the country without being clearly photographed, videotaped or fully understood, should attract a good deal of divisiveness and even infighting. When proponents of the 'flesh and blood' camp mix with those who favor a 'magical' explanation, it can sour both sides from the real objective, which is to prove conclusively this entity's existence.

The principle of the simplest explanation, usually being the correct one, stands up in terms of building theories, but it should not be used as an arbiter between two opposing theories...and so we are left with the two camps.

Because of the similarities between our current understanding of the UFO phenomenon and that of Sasquatch, the fleeting visual aspect (most reports lasting less than a few seconds) the high strangeness (UFO's and Bigfoot moving at extreme speed often with disregard to physics) and with lack of much physical evidence (some trace material like radioactive soil or some unusual hair), not to mention the seeming invulnerability of both phenoms to physical attack (no UFOs or BF downed by gunfire) the link between Bigfoot and UFO encounters must fall into a similar category.

Why, in these modern times, with so much technology, do we not have a full accounting of everything in our animal kingdom? Some will cite the case of the Coelacanth fish as evidence of an evolutionary throwback that, due to it's extreme habitat, was thought to be extinct until it was brought to fresh, modern speculation in a fishing net. To suggest that Bigfoot falls into this same explanation is to say that we have not really looked deeply enough into the woods. I refute this suggestion, as we have the ability to see nearly every square foot of the planet in high detail from space through satellite technology. We have a military/industrial complex that can ferret out any heat-producing organism of human size (or larger) with FLIR equipped cameras. Despite the large tracts of uninhabited land on the North American continent, humans have traipsed on so much of it that over the past fifty to one hundred years we have compiled perhaps several thousand decent eyewitness reports of weird footprints, strange sounds and sightings of the giant hairy extra-human entity.

There remain countless arguments and conjecture on both sides. I'm simply asking that more researchers of this phenomenon take the time to explore other theories.

Maybe one day we'll discover, beyond a doubt, where the truth lies in reference to Bigfoot. There may be a grand connection between all the mysteries in our world...possibly involving other worlds or dimensions as well. Mankind may be the greatest mystery of all and the reason why Bigfoot, extraterrestrials, spirits, etc. seem to be as fascinated with us as we are with them.

Visits from the Forest People: An Eyewitness Report of Extended Encounters with Bigfoot

Alien Paranormal: Bigfoot, UFOs and the Men in Black