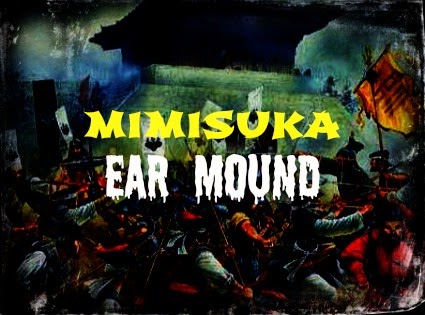 The Sengoku period of Japan was an era characterized by social upheaval, political intrigue and near constant military conflict. Dating far back into Japanese history, warriors have been known to take human trophies, specifically the heads of their enemies slain on the battlefield. Often time’s remuneration was paid to these soldiers by their feudal lords based on the severed heads.

When the Japanese forces invaded Korea 400 years ago (The Imjin War), samurai warriors brought back priceless porcelain, ingenious metal type for printing...as well as noses and ears hacked off the corpses of tens of thousands of Koreans.

The ultimate goal of the offensive was to conquer Korea, the Jurchens, Ming Dynasty China and India. During this time in history, the gathering of war trophies was still highly encouraged. However, because of the sheer number of Korean civilians and soldiers that were killed in the conflict, and the crowded conditions on the ships that transported troops, it was far easier to bring back ears and noses instead of whole heads.

In one of the world's more macabre war memorials, a 30-foot-high hillock in the ancient Japanese capital marks where the noses and ears were buried.

Few Japanese outside Kyoto know of the Ear Mound, but almost all Koreans do. In Japan, even among those who have heard of it, the Ear Mound is largely seen as a bizarre relic of little relevance today. To many Koreans, it is a symbol of a Japanese brutishness that still lurks beneath the surface waiting to explode.

Although the major countries of East Asia, ranging from Vietnam through China to Korea and Japan, share a common cultural heritage to a considerable extent, deep antagonisms linger. A major reason for these antagonisms is not just competing interests today but also divergent memories of the past.

In Asia, history hangs over the present and constantly threatens to destabilize the future. The most sensitive memories are of World War II, but the Ear Mound underscores how some incidents continue to fester long after the people who were tortured or killed have turned to dust. Americans also mutilated corpses, of course, with European settlers scalping Indians and vice versa, but those atrocities do not have the same political or social resonance today that such episodes do in East Asia. 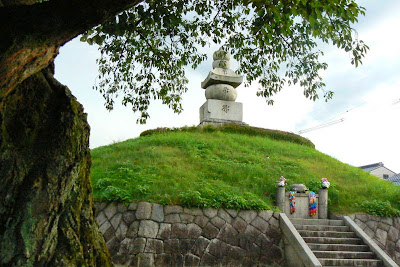 The Ear Mound dates from Japan's plans to conquer China and divide it among Japanese lords. Korea was in the way, so Japan assembled some 200,000 troops in 1592 and launched an invasion, setting off a war that lasted six years and by some accounts killed more than one million Koreans...close to one-third of the country's population at that time.

The samurai in those days often cut off the heads of people they had killed as proof that their deeds matched their stories, but it was impossible to bring back so many heads by boat to Japan. So the samurai preserved the noses and sometimes the ears of those whom they killed, soldiers and civilians alike.

Most of the noses were cut off corpses, but some Koreans reportedly were not killed and survived for many years without noses or ears.

The Japanese troops brought back barrels that may have contained the noses or ears of 100,000 Koreans, scholars say, but these numbers are unreliable. Korean estimates are sometimes tainted by the partiality of the researchers, and the subject has not attracted extensive Japanese scholarship, partial or impartial.

Japan's rulers displayed the noses and ears to Japanese subjects, apparently as a warning not to challenge the authorities. 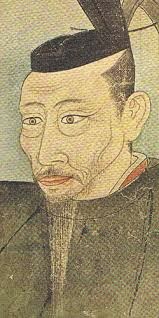 By 1585, Toyotomi Hideyoshi had become the liege lord of Japan. Hideyoshi is historically regarded as Japan’s second "great unifier." Hideyoshi had massive structures constructed that contained the sliced ears and noses of the killed Korean soldiers and civilians taken during the war. The largest such monument is named Mimizuka (literally "Ear Mound", often translated as "Ear Tomb") and it enshrines the mutilated body parts of at least 38,000 Koreans. The shrine is located just to the west of Toyokuni Shrine, in Kyoto, Japan. The Mimizuka was dedicated on September 28, 1597. The exact reasons it was built are unknown. It was uncommon for a defeated enemy to be interred into a Buddhist shrine.

Some 700,000 Koreans live in Japan, mostly descendants of forced laborers brought here early in this century, and it often galls them that Japan does not show more remorse for the occupation of Korea from 1905 to 1945 or for the use of Korean girls as sex slaves during the war. In Korea itself, anger at Japan still rumbles beneath the surface and a visit to a historic site is usually accompanied by a guide's angry comments about looting that occurred as far back as the 16th century.

On the other hand, some Japanese argue that Koreans and Chinese have vastly exaggerated the scale of the suffering and that in any case atrocities are simply an unfortunate part of any war.

Starting in the 1990's Japanese school textbooks made enormous strides in recounting the brutality of the period honestly. 30 years ago, not a single textbook referred to the Ear Mound, but it is common now. So eventually this bit of history may become much better known in Japan.

Koreans react to the Ear Mound in different ways. 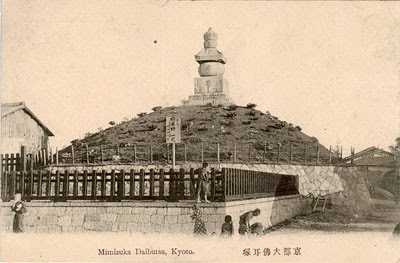 When Park Chung Hee was dictator of South Korea in the 1970's, some of his officials urged that the Ear Mound be leveled because it was shameful for Koreans. Other Koreans have suggested that the mound be relocated to Korea to appease the spirits of the dead. But most say that the mound should stay in Japan as a reminder of past savagery, and in any case Japan treats the Ear Mound as a national landmark and would be unwilling to return it.

The Ear Mound is not mentioned in most guidebooks, and it attracts few Japanese or foreign tourists. But children in the Hiroshima public schools, who are particularly sensitive to war because of the atomic bombing there, are regularly bused to Kyoto to see the mound and ponder the suffering that Japan has inflicted on its neighbors.

Although the Ear Mound in Kyoto is the best known, there are similar ones...mostly much smaller...around the country, particularly in the south. Those also date from the Korean invasion and were apparently established by feudal lords who also sent troops to Korea.

Mimizuka had become an embarrassment of sorts for the Japanese government. There were attempts to portray it as somehow proving Hideyoshi’s leniency, and thus his virtue, toward the vanquished. A sign was placed in front of it which contained this line: “One cannot say that cutting off ears or noses was so atrocious by the standard of the time.” The sign was removed several years ago. It is today largely ignored by the people of Kyoto. Few signs direct tourists there, and what little maintenance it gets is provided by local volunteers.

Proposals have been made by Korean politicians to have Mimizuka leveled or excavated and its grisly remains brought home. A Buddhist ceremony was held there in 1990 with the purpose of comforting the spirits of the dead. A Japanese organization got 20,000 signatures on a petition asking that the contents of Mimizuka be returned to Korea. The government stoutly refused, insisting that it was an officially designated national cultural asset and must stay. Once in a while, you will see a bus full of Korean tourists who have made it their purpose to visit Mimizuka.

NOTE: I suppose you're wondering if Mimizuka is haunted. There are very few references of paranormal activity around the monument, especially by the locals. But I did find a statements from a South Korean tourist who said that she witnessed the apparitions of women and children walking down the steps that lead from the monument. Another visitor (unknown nationality) commented that he heard the sounds of swords slicing through flesh and screams of the victims. One would think that this macabre monument would hold a great deal of energy...though, time may have absorbed much of the sorrow. Lon

Toyotomi Hideyoshi: The background, strategies, tactics and battlefield experiences of the greatest commanders of history

The Imjin War: Japan's Sixteenth-Century Invasion of Korea and Attempt to Conquer China