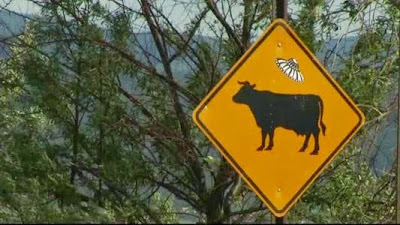 There is a mystery unfolding along New Mexico's roads and highways. A mystery many of you may have already noticed.

Strange UFO symbols have appeared on dozens of cattle crossing signs. Where are they coming from? Some may want you to think it's the work of aliens, but the explanation is probably a little more down to earth.

It's a mystery straight out of the X-Files. Driving down the highway from Taos to Santa Fe, you'll see them. Just one of the many places they've appeared around New Mexico. UFO stickers placed on cattle crossing signs, giving the appearance "aliens" are beaming the cows up.

Maureen Ortega is one of the many New Mexicans who have noticed the strange signs. She says they first started appearing around Taos and northern New Mexico a few years ago.

"They've been there for a while and I've often wondered who did them. Wondered if it was someone who was into UFOs or did it for a prank or whatever," said Ortega.

She thinks the message behind the stickers may have to do with reports of cattle mutilations in the area. Mutilations, many believe are the work of extra-terrestrials.

"Twenty-two years ago ranchers were finding cattle mutilated all over the place and it was blamed on aliens. What else could have done it?"
For the answer we turned to author and paranormal investigator Benjamin Radford. The self-described skeptic has written books about the cattle mutilation phenomena.

"The majority of these so-called animal mutilations are actually perfectly explainable. There's nothing mysterious about it," Radford said.
He says here in New Mexico it makes perfect sense "some" would think aliens "are" involved.

"There's a strong folklore of aliens and ETs tied to New Mexico anyway. On top of that you have the animal mutilations, the cattle mutilations," Radford continued. "Let’s say for example you have the exact same animal and if it was found in the late 90s in Texas, people would say it's a Chupacabra. The vampire beast came and sucked it blood out. The same animal found in Northern NM in the 1980's people might say its aliens."

So does he think that is the reason behind the stickers? Is someone putting them up to send a message?

Radford said the people that are doing this aren't necessarily UFO believers. It's easy to assume there's some big important message here. He says they're having fun.

Even Radford admits we'll never really know who is turning our cattle crossing signs into extra-terrestrial messages, or why, but the truth is out there.
Whatever the reason, the mystery may be over.

KOB reached out to the New Mexico Department of Transportation to see what it thinks of the altered signs. A spokesperson says they weren't aware of them but will be taking them down since they can distract drivers and the stickers block the reflective areas meant to warn people about cattle crossing the road. - KOB 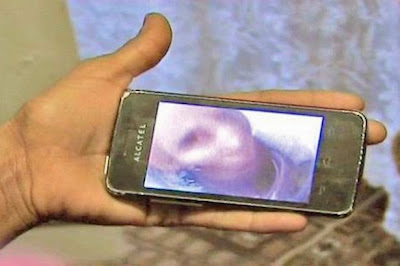 This supposed ghost selfie 'taken by a dead grandmother' has Romanians spooked.

Petrified Gina Mihai, 34, claims the spirit of her deceased grandma is reaching out in a desperate message for help.

Locals have been packing out churches to pray for her after a fortune teller claimed she was being punished 'in the other life' for her sins.

Gina said: "When I switched the phone on I was horrified to see my dead grandmother's face. Read more at Mirror

Twenty-six students at a girls high school in Fukuoka Prefecture became sick Monday in an apparent panic attack, prompting the school to close for the day.

It was not immediately clear what caused the students to fall ill.

According to Yanagawa High School, a private school in the city of Yanagawa, a first-year student suddenly shrieked in the middle of a class and fell down at about 10 a.m.

Two other students in the class fell into a similar state soon afterward, followed by students from other classes who came to check on the incident. Some of the students turned pale, though the exact cause of their sickness was not known.

The school let the 26 students go home and canceled all classes later in the day. It remained closed on Tuesday as well, an official said.

“We don’t know why such an incident happened, but we need to take good care of the students. I’ll talk to them more to find out what happened,” said Vice Principal Shigemitsu Mori.

Twitter and other social media were abuzz with unfounded rumors of the students “becoming possessed with evil spirits,” the Nishinippon Shimbun reported Tuesday. The students got well soon afterward, according to the paper.

Psychiatrist Rika Kayama said students in adolescence can feel excessive tension and anxiety, which are highly contagious, and added that the group panic attack might have been triggered by occultism.

“The only thing you can do (to avoid the recurrence of such incidents) is to distance yourself from people and topics that triggered such incidents. Rumors spread quickly in today’s society, through Twitter and other means, raising the possibility of panic attacks,” Kayama said. - Japan Times

In the late 1990s and early 2000s, doctors began wondering if people ever became aware while under anesthesia. They started doing post-operative interviews to find out. Then they took it one step further, and tested whether people could learn under anesthesia. Check out the results.

Awareness during surgery is so terrifying that multiple horror movies have been made about it. It's also the subject of many second-hand stories and urban legends. These days it's rare for such things to happen. Drugs that immobilize a patient during surgery are given only at the beginning of a procedure, as part of the process of knocking the patient out. They wear off, at which point if you are aware you can register a complaint. During longer surgeries, it's not uncommon for doctors to monitor a patient's brain activity to check for distress.

But around the late 1990s and early 2000s, doctors got into investigating the anecdotal evidence regarding awareness during anesthesia. Some of this investigation consisted of interviews, both just after surgery and about a week later, during which people described their experiences. Certain interviews are suspect, because they mention extensive attempts to "jog" the person's memory. Interviewing of this kind has gotten a bad reputation, as it has been known to "jog" people's memories about past lives and extensive abuse by nonexistent satanic cults. Still, other interview-based studies found that in as many as 0.13% of procedures, people gain some awareness while under general anesthesia.

Taking it just a bit of a step further, some studies tried to determine if people could take in and retain information while under general anesthesia. The results are encouraging for those who would rather be absolutely unaware of being poked with scalpels than be able to learn French while under the knife.

The Many Disturbing "Awareness During Anesthesia" Studies

One experiment involved an odd assortment of tests. Sometimes people were instructed to touch either their ear or their nose while under anesthesia. During a post-operative interview, they touched the suggested body part longer than the part that wasn't suggested, but only by a matter of seconds. Patients were also played tapes of words, all of which had the same first three letters. Later they were shown those letters, and asked to think of words starting with them. They generally picked more words from the list played during the operation than unlisted words. Finally, patients were played a list of nonsense words, either frequently or infrequently, during the operation. Afterwords, they were asked to guess the comparative frequency of the nonsense words. They recognized the words played more frequently than the ones played less frequently, but the frequently-played words were only recognized 62% of the time.

Overall, it seems that softer tests of "learning" during anesthesia can get mildly positive results. On the other hand, "controlled studies using explicit memory tests" get "uniformly negative results." However much anecdotal evidence for slight awareness during parts of a procedure under general anesthesia, no one is learning anything while they're knocked out. - io9

Woman Claims Ownership Of The The Sun

A Paradise Lost: In Search of Eden


Inside the Real Area 51: The Secret History of Wright Patterson

Incredible Tales of the Paranormal: Documented Accounts of Poltergeist, Levitations, Phantoms, and Other Phenomena