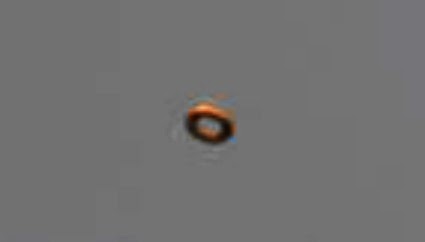 St.Paul, MN - 7/29/2014: I was looking up into the sky, like I usually do when I’m outside. I saw what at first I thought was a plane moving pretty fast way in the hell up there but something looked off about the shape. I went inside and grabbed my Nikon D3100 with a 55-200 MM zoom lens to get a better look.

It was moving pretty fast, think cruising speed, made no sound and was pretty high up there so it had to be a decent size.

It was moving in a straight line so is was not a drifting balloon – besides it moved too fast for that though I understand that wind speeds up there are not the same at ground level. - MUFON CMS

More mulch churned up by deer and by whatever made those 4-5 inch tracks, a strange “paw” print on the house siding, and a family even more perplexed about what’s lurking literally in their back yard–these were what fellow investigator Jay Bachochin and I found on a return to the residential site in Hartland where a woman saw a six-foot tall, upright wolf-like creature cross her back yard at 1:30 a.m. the night of July 17-18, 2014.

I invited Bachochin, founder of the WPI (Wisconsin Paranormal Investigators) to help conduct a more thorough search of the grounds. The owners also graciously invited us to use their deck for a late night stakeout. We were able to sit quietly in the dark with a perfect view of the yard, cameras at the ready, and confirmed that the eyewitness would indeed have been able to see and identify a large creature from that position. We also spent some time viewing the neighborhood by foot and by car to see just how much cover there was for a large predator — and found a surprising amount of wooded ground that would allow it to make its rounds and then escape to a freeway corridor (US Hwy 16) when ready to return to the lake-and-park-rich surrounding area. Read more at Linda Godfrey

Here is the original post - Hairy Thing of Hartland

Monsters of Wisconsin: Mysterious Creatures in the Badger State

My bosses want me fired because I believe in ghosts

A Department of Veterans Affairs cop, convinced his former New Jersey workplace is haunted by evil spirits, says the feds are using his belief in ghosts as an excuse to fire him, The Post has learned.

The spooky story pits Valdo Vaher, 48, a retired Army sergeant and former lieutenant in the New York Guard, against the VA, where he began working in 2006.
Vaher, who lives in Rockland County, defiantly insists otherworldly phenomena are real.

“This seems strange to some people, but for religious Catholics like myself, many feel as I do about this — that there are spirits in the world and they sometimes show themselves and are more likely to be doing this in and around hospitals, where people suffer and die,” he told The Post.

The VA initiated a long and bitter legal battle to permanently exorcise Vaher because, it charges, he’s basically too crazy to be a cop.

At one point he actually was fired. But in 2013, a judge for the Merit Systems Protection Board in Washington ordered he be re-hired.

As part of a settlement, he was reassigned from the Manhattan VA Hospital to a facility in East Orange, NJ.

In February, he was stripped of his gun, placed on modified duty and reassigned to another New Jersey facility for “making bizarre statements and displaying unusual behaviors,” according to a letter from VA Deputy Police Chief Bernais McNeil.

Vaher was chided for giving a hair-raising talk to a rookie colleague about how their East Orange command was haunted by “evil spirits” — comments the agency suggested posed a safety risk to his co-workers and warranted his dismissal.

“You should stay away from certain areas here because there are evil spirits. I will give you some holy salts to ward off these evil spirits,” Vaher is quoted as having told the rookie.

Vaher is also alleged to have said, “Watch out for certain trees because they have faces and I just have a bad vibe with them” and “People around this area are animals.”

Vaher, who holds dual US-Estonian citizenship and who served in that country’s military, was an MP at West Point for nearly a decade and worked as a civilian observer in Kosovo for the State Department in 1998, a position that required him to brief the White House on a daily basis.

Vaher’s lawyer, Alan Wolin, accused the VA of “using psychology as a weapon, just like in the old Soviet Union” and insists the agency doesn’t stand a ghost of a chance of winning its case against him.

“They’ve been targeting him since Day One,” he said. “The bottom line is that they tried and failed to fire him twice before and we’re extremely confident we’ll win again.”

The VA formally notified Vaher this month of its latest plan to cast him out.

But Vaher still won’t back away from his claims that the VA’s East Orange site is haunted by ghostly apparitions.

“There are many people who work there who would tell you privately that there are spirits in that place and lots of them,” he said.

“There’s a lot of paranormal activity there. The police know it. The janitors know it. And the nursing people know it. They all know it — especially the people who work the night shift,” he said.

I like hiking. It's a relaxing activity for me. I just walk over rugged terrain and think about what's happened, what's happening and most importantly, what's going to happen. I'd been an avid hiker all my life, but, we moved to Kansas, my family and I. Not much opportunity for a good hike. So I always leap at the offer of going to see my cousins because they lived in Colorado and it had mountains and whatnot. I never carry a walking stick when I hike, I'm young and agile and don't really need one.

Going on these hikes I always expected to meet at least one person, but I usually met a lot more. So you can see why I was concerned when I didn't see a soul on the mountain. Well, I say I didn't see anyone, but almost right when I started I saw a shoe. A size 8 women's shoe. One shoe.

I had heard of the Vancouver feet so I hesitated to look inside for the shoe size. No severed foot. Just a shoe. But I did notice rustling leaves as I neared the shoe, shrugging it off thinking it was a bird or something. I took the shoe because I like to return things to their rightful owner. Like when I see someone drop their keys on the way out of a busy place I rush to get them to the person. I'm a nice guy. But once I picked up the shoe, I heard above me some twigs snapping and they fell to the ground. I looked up only to see the sunlight peaking through the trees. So whatever was up there was hidden by sunlight. Today was a clear day not a cloud in the sky. Beautiful. I continued on with the shoe. It's probably good to mention I only had a pack of about 4 water bottles and a couple granola bars. So in short, not much stuff. About, 15 minutes later (I can't measure distance with time), I found a water bottle, empty. I hate litter so I picked it up and didn't think anything of it. Again I heard birds in the trees, they seemed to be following me.

I had gone a while and was thinking about my girlfriend and how I could tell her for the first time that I loved her, because I did and I knew she did, me. But I saw another empty shoe, a men's size 11. I picked it up and that's when I noticed the sun went dim. I looked up expecting clouds but that didn't make sense it was a clear day. Instead I saw a man. In the trees. He wasn't sitting on a branch but he was like a cat upside down as the tree would go up, clinging to it with abnormally large nails. He had a big scraggly beard, a full head of hair and a thin almost starved body. He was naked but I didn't see anything extra, if you know what I mean. It was bare. Like a doll.

He wasn't a doll though he was very human(ish). He didn't act like it though. He was licking his lips as though he hadn't eaten in weeks. He looked the part, too. Although I couldn't see his face, I could hear him smacking his lips. I decided it wasn't a good idea to talk to him. But he had made an effort to be noticed. I wasn't scared for my life I was frightened at the pose he took as he landed on the ground. His arms were outstretched until his elbows bent 90 degrees to support himself with his hands. His legs were the exact same, they were abnormally positioned for legs.

He (I don't know how else to say this) skittered towards me. His hair had always been in his face ever since the tree. But he looked up at me. His eyes were dark green all over. His nose was misshapen as if broken. His smile was big but not inhumanly big. The thing that made me fear for my life was his teeth. They were inhuman. They were pointed like a wild animal and stained red in some places and yellow in others. I dropped the shoes and booked it.

I didn't look back, I didn't have to, he dropped from the trees right in front of me. I did my darnedest not to run into him for fear that he'd take a chunk out of me. I slid to a stop. He let out a blood curdling howl as a coyote would once it had caught it's prey. I assumed that wasn't in his best interest because after that I heard shouting and the thing skittered off down the mountain then up a tree. Gone from sight. I was petrified there until the shouting came from off the trail and in front of me. The forest rangers, there were two, were barking questions at me. "Did you touch him?" "Did you talk to him?" "Did he talk to you?" All these sort of things. I said shakily, "n-no" the forest ranger had a shotgun with him and his buddy, probably his partner, had some kind handgun. I'm no expert in guns. The mountain man had made his appearance to me and from what I understand from the rangers, he won't stop hunting. I'm not going hiking by myself again. - Reddit.com 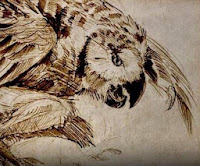 In Search of an African Monster

This is the worst Ebola outbreak in history. Here’s why you should be worried.

Evidence of Bigfoot in the Bluegrass

Cryptids of the Caribbean, Part 1: Cuba

Is Earth Vulnerable to Solar Storms?


The Dictionary of Demons: Names of the Damned

Deliver Us from Evil: A New York City Cop Investigates the Supernatural

Unbound: A Practical Guide to Deliverance