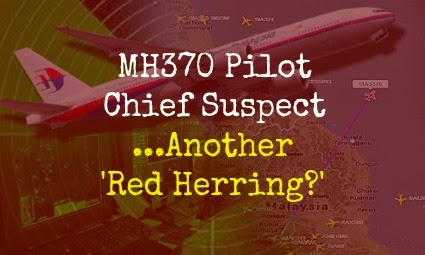 In a recent revelation from The Week it is starting to look like Captain Zaharie Shah had practiced flight simulator drills for landing on a short island runway:

The wife of the Malaysia Airlines captain in command of flight MH370 has confirmed that he spoke the final words received from the aircraft, as it emerged that he is now the chief suspect in its disappearance.

The airline had initially stated that the co-pilot had made the last broadcast from the cockpit, which gave no hint of any problems on board the aircraft, but Captain Zaharie Shah's wife told the Waikato Times in New Zealand that he was the one who said "good night, Malaysian 370" shortly before the plane changed course.

According to recent reports, investigators have shifted their attention to Zaharie after discovering that he had used a flight simulator he had at home to rehearse a landing on a short island runway in a remote area of the southern Indian Ocean.

Although he had deleted the drills before taking command of flight MH370, The Sunday Times reports that computer experts were able to retrieve them.

Police have so far failed to turn up any hard evidence against the pilot, but he is now the prime focus of the criminal investigation after intelligence checks cleared all other passengers and crew.

"Investigators have previously refused to 'clear' the captain’s flight simulator of suspicious activity," The Independent reports. "It now appears they found evidence of routes programmed to take a plane far out into the Indian Ocean and practising landing using a short runway on an island."

Detectives, who have conducted over 170 interviews, also found that Zaharie had made no social or professional commitments beyond the date of the missing flight, in contrast to his co-pilot and the rest of the flight’s crew.

The investigation has not ruled out the possibility that flight MH370 was lost due to mechanical failure or terrorism, but the police view is that if it was the result of human action, the captain is the most likely perpetrator.

Malaysia’s prime minister, Najib Razak, gave the first hint about the government’s suspicions of "deliberate action by someone on the plane" on March 15.

Zaharie's relatives have defended him against any suggestion of wrongdoing and Malaysian police have refused to confirm the contents of their interim report.

"The police investigation is still ongoing," they told The Sunday Times. "To date no conclusions can be made as to the contributor to the incident."

The country's acting transport minister has dismissed the claims.

Nevertheless, the newspaper says that initial findings from the investigation have been sent to foreign governments and investigators.

There are rumors of undisclosed "sealed evidence" circulated weeks after the plane went missing expanding theories of conspiracy and cover-ups, and the latest news, leaked by aviation industry sources and officials in south-east Asia, has left the public wondering if the authorities know that the plane was deliberately hijacked.

As well, The Malaysian government deliberately concealed the captain's association with Anwar Ibrahim, the country’s main opposition leader who was jailed on charges of homosexual behavior just hours before the plane took off.

Are we looking at another 'red herring?'

I still contend that there are political implications involved with this disappearance.

On April 9th, 5 weeks after Malaysia Flight MH370 disappeared, I speculated on available information and additional knowledge from private sources.

NBC News posted an update to this mystery at Flight MH370: What Do We Know About the Missing Malaysian Jet?.

Malaysia Airlines' commercial director Hugh Dunleavy recently stated that the MH370 hunt will take 'decades' in an interview with The London Standard.

Adding to the speculation is a recent report from the Phukett Gazette that states that crowd-sourced research plotting the projected flight path of missing Malaysia Airlines Flight MH370 by using data from Inmarsat satellites may have confirmed that a British woman sailing from India to Phuket spotted the ill-fated flight over the Andaman Sea. But was the airliner's course changed after that supposed sighting?

At this point, I believe there is a strong possibility of deliberate distraction in order to sway the public's attention away from plane's actual fate...whatever that may be. Lon

For Nobody's Eyes Only: Missing Government Files and Hidden Archives That Document the Truth Behind the Most Enduring Conspiracy Theories