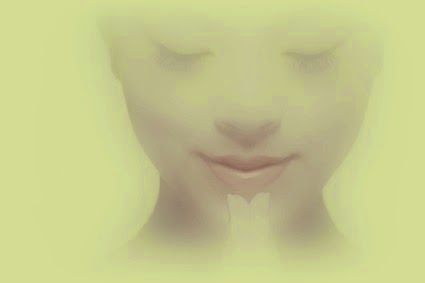 The 'Woman' at Work

I work in a small college that specifies in helping students get their HSE (or previously, GED) certificates. I work in the mornings and in the nights. I continue to encounter this certain woman. She is an Asian lady and every time I see her, she greets me. She'll nod to me, or sometimes she'll nod with her hands together. This should not be an unusual circumstance given that there are often students from minority groups. However, this woman only appears when no one is around and always in passing. I'll see her and smile at her. She'll nod, and she'll move on down the hall. I've never exchanged actual conversation with her and I never see her in any classroom.

One time, I decided, after she passed me and I moved on to another room, to go and look for her in the direction she had been walking in. There were only six classrooms on that side and I checked in all of them. There is the possibility that she left out the back door, but I didn't hear any doors open or shut.

It's always good to see her show up. She has a kind, peaceful manner to her. - Reddit.com

Ghosts Among Us: Uncovering the Truth About the Other Side

As professions go, it’s right up there in the popularity stakes with real estate agents, used car salesmen and journalists.

TV psychic John Edward is one of the most famous figures in the world in his particular line of work. In the process, he's also been in the firing line of numerous debunkers, scathing ridicule and perhaps, most infamously, South Park, which dedicated an entire episode to him in 2002 titled ‘‘The Biggest Douche in the Universe’’.

While on a short visit promoting his Australian tour in November, Edward says online attacks are the worst, as critics have completely free rein.

"It never really bothered me up until my son was 11," he says. "And then I realised I had to have the talk with him. Most people, when their kids get to be 11 or 12, they get to have various talks. I had to have the internet talk: 'Don’t Google Daddy’s name'."

He says his children – his son, Justin, is 12 in September and his daughter, Olivia, is seven – understand what he does and he uses his work as a platform from which to explain death and dying to them.

It’s the same principle, he says, that is the reason behind his popularity: an aim to teach people.

"There are a lot of people out there that are claiming to do this work, and I would never in a million years sit next to them on a couch and put my name next to them because I don’t think they’re coming from the same place," he says. "Their ability could be awesome but their intentions, hmm, not so much, so I think you have got to be really careful.

"Sceptism does that, it makes you discern what’s real or not real, or maybe you look behind the curtain a little bit and see this person’s really making it about them, they want to be famous. They’re using this ability to put themselves out there as opposed to this person, who’s a teacher who wants to help people."

He says while sceptism is OK, he has no tolerance for cynicism.

"What I have a problem with is that I know a lot of people who don’t believe and I’m respectful of the fact they don’t believe. I never attack somebody for being agnostic, I don’t call them names for being an atheist.

"If someone doesn’t think that there’s an afterlife or spirit works and that it’s impossible to communicate with them, I don’t call them stupid, I don’t attack their character or try to assess their motivations."

Edward was born in Long Island, New York, and says he realised he had psychic abilities when he was a teen when a medium at his grandmother’s house told him he shared the skill.

"I did have a lot of experience early on, I just didn’t know what to call it, but at 15 I kind of embraced it," he says.

He explains it as being able to tap into energy or "vibrations", and his career went from private readings to group shows, books and then his first TV show Crossing Over in 1999, followed by Cross Country in 2006.

At age 44, he says he’s still not adjusted to his high profile. "It’s still not something I’m comfortable with," he says. "I don’t like the attention. My wife says all the time, all of this is completely wasted on you." - SMH

A former US Marine has claimed he spent 17 years of his career on MARS.

The ex-naval infantryman, who uses the pseudonym Captain Kaye, says he was posted to the Red Planet to protect five human colonies from indigenous Martian life forms.

He claims he then spent nearly three years serving in a secret 'space fleet' run by a multinational organisation called the Earth Defense Force, which recruits military personnel from countries including the US, Russia and China.

In testimony released to ExoNews TV, Captain Kaye said he was trained to fly three different types of space fighters and three bombers.

He added that training took place on a secret moon base called Lunar Operations Command, Saturn’s moon Titan, and in deep space.

Captain Kaye says he retired after a 20 year tour of duty, describing a retirement ceremony on the moon that he claims was presided over by VIPs including ex-Defense Secretary Donald Rumsfeld. Read more at Mirror

The bizarre spectacle of a half-fox, half-human has been attracting crowds to Karachi zoo for years.

Known as Mumtaz, the 'creature' appears to possess the body of a fox and the head of a human that not only looks real but can actually talk to zoo visitors when they go in to see it.

Far from being a crytpozoological enigma however this bizarre cross-breed is nothing more than the body of a fox with a man's head sticking out from under a table to make it look as though its part of the animal.

33-year-old Murad Ali is the man behind the myth and has been playing the character of Mumtaz at the zoo for up to 12 hours a day. He inherited the role from his father who died 16 years ago.

"The people, who visit here, go away happy," he said. "And knowing that they feel happy makes me happy too. There is a bond of love between me and them. Life is very short; it should be spent spreading smiles." - Unexplained-Mysteries

Rick Phillips forwards Those UFO Tales From The 1950's - And The Omissions and states:

One thing that is very satisfying when I look at the stats for UDCC is just how long the average person spends here each time they come - usually about 7 minutes plus..... today you will need to spend more than that to absorb this post about what happens to UFO stories as they get retold decade after decade... you man be surprised what real UFO blogging finds.

Oarfish can be cut in half...and survive

The Trent/McMinnville UFO is a Ford Side-View Mirror?

Demons, doomsday, fear: My life living in a cult

The Other Roswell Mystery


The Bigfoot Filmography: Fictional and Documentary Appearances in Film and Television

Mirabilis: A Carnival of Cryptozoology and Unnatural History