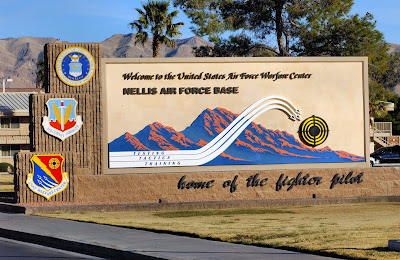 Our home is about 30 miles from the Yucca Mountain Nuclear Waste Depository in South West Nevada on the North Side, and on the South West side by the Funeral Mountains - on the other side is Death Valley, California.

This is ongoing. We see round red lights over the Nellis AFB Range which hover then disappear. The nearest government aircraft base is the Indian Springs drone base, but we do not think this is a US drone out after dark.

We have seen movement when there are multiple lights. They sometimes drop suddenly and are replaced by other round lights. No civilian aircraft are allowed over the Nellis restricted airspace. We have an unobstructed view as there is nothing but open desert between us and the mountains where we see the lights. Population density in our area- 2 persons per square mile.

My wife Theresa was an airborne traffic reporter in Southern California.

She flew fixed wing and helicopters. Her Father was a jet engine mechanic and a Pilot. She has extensive knowledge of aircraft. She and her parents are US born but she grew up in Saudi Arabia where her dad had landed a very good position. She has traveled extensively by air and ground in the Middle East, Europe, and Africa. She also was a Reporter on Channel Metro 4 Los Angeles, and other TV and Radio stations. She is a trained observer.

What we are seeing is not fantasy. Something unknown is going on out here. MUFON CMS

Chariots of the Gods 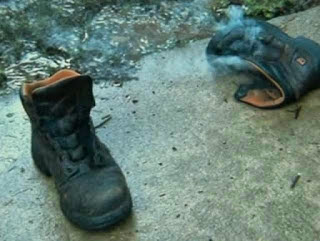 Lightning Knocks Man Clean Out of His 'Smoking' Boots

A man who was blown out of his boots by lightning at the weekend says he’s grateful to be alive. Sean O'Connor, 30, from Coweta County, south of Atlanta, Georgia, said he had just picked up a rake on Saturday when, suddenly, he heard a loud crack. “It sounded like a tree falling over,” he said.

“It threw me across the driveway and knocked me out of my boots.” Disoriented, O’Connor initially assumed he had been hit by a tree, until seeing his smoking boot. “When I noticed my boots were on the other side of the driveway and I heard the thunder, I realized it was lightning that had just hit me,” he said.

“When I stood up, I had blood in my mouth. I could smell burnt hair; felt like I had a bad sunburn on my leg," he added. After collecting himself, O’Connor called his wife to tell her what had happened, sending her a cellphone video of the scene when she initially thought he was exaggerating.

O’Connor’s wife then urged him to go to the hospital, where he was held for 24 hours because of an irregular heartbeat. O’Connor returned home on Sunday, emerging from the potentially fatal incident with lower back pain, a few scrapes from when he was thrown and no indications of permanent damage. “I look like my normal self,” he said. “It’s hard for people to believe I was struck by lightning.” - ABC News

A robber who allegedly hypnotizes bank tellers in to giving him money is being pursued by police.

The mysterious thief appeared to rely not on guns, knives or other conventional weapons but on his strange hypnotic stare to steal money from at least four different banks across Manhattan over the last few weeks.

On Friday he reportedly entered a Bank of America branch and handed the teller a note stating "this is a robbery" and to make it "quick and easy".

Rather than attempting to conceal his identity like most robbers however the enigmatic perpetrator instead proceeded to stare the teller right in the eyes the entire time, not looking away even once until he had received the money and was ready to leave.

The FBI are now attempting to hunt down the man before he can strike again. Read more at LA Times

Using his strongest language to date, Pope Francis told Italian Mafia members on Saturday that they are excommunicated from the Catholic Church.

"Those who in their life have gone along the evil ways, as in the case of the mafia, they are not with God, they are excommunicated," Francis said in an outdoor Mass in Piana di Sibari, Calabria.

It is the first time a Pope has spoken of excommunication for the Mafia. Excommunication, which excludes Catholics from the church, can be imposed by church authorities or incurred automatically for certain grave offenses.

The Pope's remarks will resonate strongly in this part of southern Italy, where the Mafia are known to attempt to portray themselves as upstanding religious men in good rapport with the Catholic Church, in order to maintain local credibility.

During a one-day visit to Calabria, the Pope denounced the local mafia, called 'Ndrangheta, as an example of "the adoration of evil and contempt for the common good."

According to reports, 'Ndrangheta is one of the wealthiest international crime organizations, with an annual turnover of 53 billion euros ($72 billion), much of it from the global cocaine trade.

Calabria also suffers from 56% youth unemployment, which the Mafia exploits with promises of jobs for disillusioned young people.

Earlier during his visit, Pope Francis met with relatives of a 3-year-old boy, Nicola Campolongo, who was the victim of an alleged Mafia hit in January.

Nicknamed Coco, the boy was with his grandfather when they were both shot and their bodies subsequently burned in a car.

It is not the first time the Pope has spoken out against the Mafia. In March in Rome at a meeting with families of victims, the Pope called directly on Mafia bosses to repent, saying "hell ... awaits you if you continue on this road."

Some anti-mafia prosecutors have worried that the Mafia may target Pope Francis, who is also reforming the Vatican, including its scandal-scarred bank, the Institute for Religious Works.

"The strong will of Pope Francis, aiming to disrupt the gangrene power centers, puts him at risk. He disturbs the Mafia very much," Nicola Gratteri, a prosecutor in Calabria, told CNN in November. - CNN 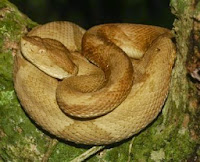 The Mysterious and Deadly Island of Snakes

10 Most Compelling Pieces Of Evidence That Prove Ghosts Are Real

16 Famous Mysteries That Everyone Forgets Have Been Solved

1,227 Quite Interesting Facts to Blow Your Socks Off

The Hollywood Book of Death: The Bizarre, Often Sordid, Passings of More than 125 American Movie and TV Idols