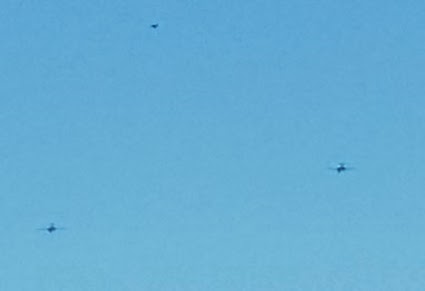 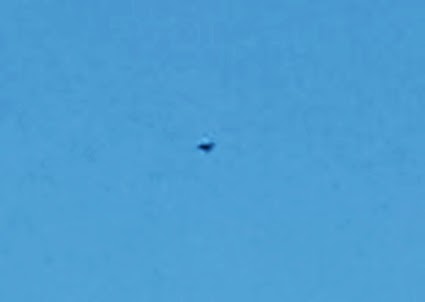 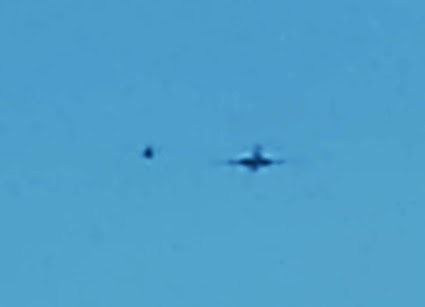 Case Number 56882
Log Number US-06062014-0011
Date Submitted 06/06/2014 11:38 UTC
Date of the Event 06/05/2014 12:00 UTC
Source MUFON
Disposition Unresolved
Summary I was trying to get a photo of two fighter jets unaware that object would appear in the photo.
Tags photo
Sighting Location
City Rapid City
Region South Dakota
Country United States
Latitude 44.026477
Longitude -103.570913
The latitude and longitude presented here is an approximation to protect the reporters identity
Sighting Specifics
Viewing Distance 501 Feet - 1 Mile
Sighting Duration 00:00:03
Object Features Unknown
Object Flight Path Path with directional change,Path then hovering
Object Shape Oval
Weather Factors Unknown
Sighting Details
My husband and I were in the garage and we heard the sound of jets overhead. Their path was directly over the cabin and so I wanted to share the photos with my brother-in-law (who owns the cabin) due to his interest in military machines. I have a Samsung Galaxy S5 because the photos are pretty darn good. It also has a feature which ticks me off sometimes because when the sound button is pressed it fires pictures in rapid succession. This happened yesterday but at the time I would have been happy with a couple of pictures of the fighter jets (truthfully not being an expert in military machines I am not all that sure they were fighter jets) They were flying low maybe two hundred feet off the ground as well very fast. Their altitude remained low even with the object going at them. I took a series of 11 photos(but your website could only let me upload 10). I believe the fighter jets were headed to Ellsworth Air Force Base which I understand no longer is an operational military facility. At the time I took the photos I had no idea there would be an object flying near the jets. It was not until I looked at the photos in the evening that I had captured something that was not US Military. The photos are just photos and open to interpretation, that is why I send them to your organization to analyze. Thank you for your time.

Claw Marks in the Pine Barrens

I was a little kid growing up in a small town in New Jersey. It was 1973 and I was 6 or 7 at the time. I really liked going outside like the rest of my generation at the time. I loved to go camping in the Pine Barrens since that was the only forest I lived near. My two brothers and I went camping on June 16th 1973 in the Pine Barrens. On the first night we put up our tents, got firewood from our house and setup our campfire. At night we lit the campfire, cooked marshmallows and sausages then we ate them. We got in our tents and slept until the sun rose from the horizon marking dawn. We then decided all three of us should go hiking and explore the damp forest from the morning dew. We would leave tiny bits of sprinkles to mark were we walked so we don't get lost. After the two hour hike and finding random carcass' of deer all over the forest for some odd reason. We got back to camp and once we laid eyes on our camp we saw that our camped was destroyed and wrecked. There were claw marks on our tents, and the food was all scavenged and gone. We thought it was a bear that got to our campsite but then I noticed that the claw marks on our tents were too big to be a bear's. My brother thought it was the Jersey Devil. What could it have been? - Redditt.com

Traces of another world found on the Moon

New evidence seems to confirm that the Earth was once impacted by a planet known as Theia.

It has long been believed that the Moon came in to being when a large planetary body struck the Earth billions of years ago and now scientists believe that they've found the clearest evidence yet that this event actually took place.

Traces of another planet have been found within the samples of lunar rock brought back by the astronauts during the Apollo Moon landings, a world that has been nicknamed Theia after the Goddess of Greek mythology.

This early world would have disintegrated on impact, with some of the material coalescing to form the Moon and the rest becoming part of the Earth.

"It was getting to the stage where some people were suggesting that the collision had not taken place," said lead researcher Dr Daniel Herwartz. "But we have now discovered small differences between the Earth and the Moon. This confirms the giant impact hypothesis." Read more at BBC

Gold in the Tap Water

Two Whitehall residents say they're finding gold flakes in their tap water and that it's raising concerns about what else might be in the water.

Whitehall is about 25 miles southeast of Butte in Jefferson County. The town gets its drinking water from two wells -- one off Division Street and another a half block east of Whitehall Street. Both wells are right in the middle of town.

NBC Montana was in Whitehall today and saw firsthand gold flakes coming from the faucet.

Mark Brown told us his wife Sharon was finishing up the dishes earlier this week when she noticed something unusual.

Brown explained, "She had pulled the plug to let the water out and there were glistening, gleaming little flecks."

They showed us what they found -- small gold-colored flakes, right in the bottom of the sink.

Brown recalled their disbelief, "That couldn't possibly be gold, huh? And I was sure it wasn't."

He showed us how they are finding the flakes in their tap water and also the toilet tank. They ran multiple tests on the flakes and found one of the most precious metals on earth -- gold -- was coming out of the tap. Read more at NBCMontana 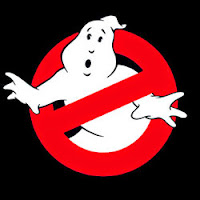 Have You Ever Wondered How Ghosts Work?

What Happens to the Brain During Spiritual Experiences?