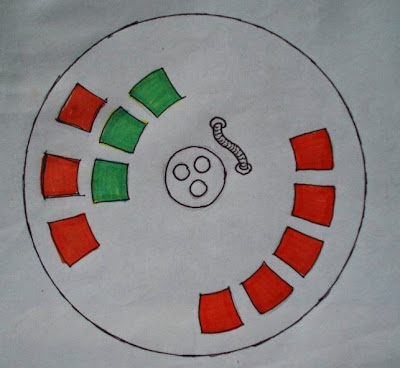 When I was nine years old (summer of 1989, I believe) I lived in a small trailer park in Colorado Springs, Colorado with my mother. My mother was dating a man who lived down the street from us. One evening when we were at her boyfriend's trailer, they had an argument that lasted late into the night, and at around 3am my mother awoke me so that her and I could walk home to our own trailer.

Our place was directly down the street from my mother's boyfriend's place. Our trailer park had a few street lights, but not many, and I remember it was extremely dark out. I held my mother's hand, and my eye focus was on my feet and the street before me.

When we were about four trailers away from our own trailer, the street lit up all around me and my mother. We stopped and looked up, and directly above us was a large, round craft. I have no recollection of seeing it move up to us, it was just there. Because I was a child at the time, and had no sense of measurement, it's hard for me to now say exactly how far above us the craft was, but I'm going to guess it hovered around 30 feet above us. It was close enough that it literally took up the whole sky; I couldn't see anything beyond it. It didn't move, it remained stationary above my mother and myself, and we stood motionless watching it in return--I have no idea for how long.

It was perfectly circular, and in the center were three, round white lights positioned in the shape of a triangle. The craft itself was a lighter gray color. There were rows of square, orange and green lights that curved with the round shape of the craft. I don't remember exactly how many of the orange and green lights there were, or their exact configuration. It was like six or seven green lights in a row on one side, then a few orange lights in a row on another spot. I saw a lot of (I guess) tubing and mechanical looking stuff--I'm not sure how else to describe it. I've drawn a rough picture of the craft, but because I don't understand all of the mechanics I was looking at, it's a very basic interpretation of what I saw. There's no way I'd be able to recreate it exactly; that would almost be like trying to draw a circuit board, or an engine.

As far as my feelings and reactions to the craft; I first want to say that I don't recall ever feeling any fear. It was more along the lines of fascination and curiosity. I never felt threatened at any time. The first thing I actually remember thinking and acknowledging was that the craft barely made a sound. It was just a slight humming, and the wind didn't stir or anything. The air was all calm around me. That was something that seemed abnormal to me, as though seeing this thing in the first place wasn't abnormal enough. It seems like the next thought process I remember was the actual realization of what I was looking at. I vaguely remember thinking something along the lines of, "They really are real", and somewhere deep down, it's almost like I remember feeling a form of happiness. Almost like a familiar happiness; something I had felt before, or related to a feeling I had felt before. My memory of the craft itself pretty much ends about this time, so the memory of those last feelings are a bit muddy.

Next thing I knew, me and my mother were walking up the porch steps to our trailer. My recollection comes back as I'm taking the first couple steps up the porch. I remember looking at the steps, my sight turned a bit to watch my mother's feet go up the steps, then I looked at my hand which was being held in my mother's hand still. I remember at that point looking up at my mother's face; she looked straight ahead, and continued to walk to our front door. I remember thinking, "Why isn't she saying anything? Does she know what just happened?"

We get to the door and she puts the key in the lock, and it was at that point, before she turned the knob to open the door, that she looked down at me and asked if we just saw what she thought we saw. I just remember shaking my head, yes. She said that we shouldn't tell anyone about it, and not to talk about it ever. We both went straight to bed, and I don't believe either of us looked at a clock. Because of this last fact, I can't say whether or not we lost any time, or if I simply lost my memory of the craft leaving and the walk home.

The next day it ended up being all over the local news and radio that somewhere around 200 people (I believe more than that, actually) had been calling in UFO sightings all throughout the night, many of whom lived in our general area of the city. - MUFON CMS 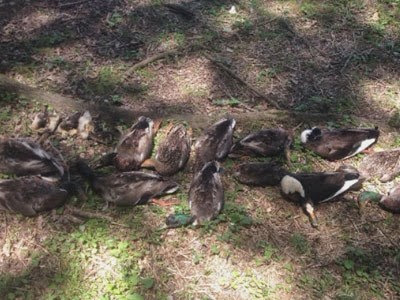 NOTE: This story was forwarded by reader Dody

NewsChannel 5 first reported about the animals deaths Monday. Property owner Michelle Desirey said the day before her husband had seen ducks suddenly fly into the rocks and die.

"He saw two wild ducks fly in that never got in the water. They landed on the rocks and immediately had something like a seizure, and then just died right there,” she said. "In five minutes they were all dead. It was heartbreaking.”

Over the next 24 hours they found more than 20 dead ducks. Monday, they even found a dead raccoon and woodpecker in the same area.

Desirey said three more ducks died Tuesday. The family raises domestic ducks and has worried that whatever is killing the wild ones could kill theirs, as well.

Officers from the Tennessee Wildlife Resources Agency have been investigating.

Desirey said they were staying away from the lake until they knew more about what was killing the wildlife.

"We're not going to fish or eat any fish out of the lake. We're probably not going to swim in the lake,” she said.

TWRA officials were working to determine if it was something the water, or on someone’s property. While they wait, Desirey said they won't even be launching their boat until they get an idea of what could be killing so much of what makes living on Old Hickory so special.

"It's not the same lake that it has been for the last forty years,” she said.

TWRA officials told NewsChannel 5 they were sending the dead ducks to the Southeastern Cooperative Wildlife Disease Study at the University of Georgia in Athens for testing.

Lab results may not be available until next month. - NewsChannel5

John Lennon's murderer was under the control of "dark" aliens determined to eradicate his messages of peace and love, it has been claimed.

The late Beatles legend was assassinated by Mark Chapman outside the Dakota Building in New York City in 1980, with the deranged fan blaming the "devil" for his actions.

Extraterrestrial expert Michael C. Luckman believes Lennon was at the centre of a battle between different species of aliens which resulted in his death.

and a forthcoming sequel 'Rock Stars, Hollywood and Alien Contact: Celebrities' Inside Secrets' - claims Lennon was regularly sent messages from intergalactic beings to include in his music with him acting as a vessel for them, something he was able to do because of the way his brain was wired, and at one point Lennon even had a close encounter of the third kind.

The veteran UFO researcher exclusively told BANG Showbiz: "This is what enabled John Lennon to receive musical messages broadcast from space and compose hit songs celebrating peace, love and freedom. John was the ideal candidate for alien contact. "Much later on he had two UFO encounters, one which may have involved a meeting with four little grey aliens at the Dakota Apartments in New York City where he lived with Yoko Ono."

Luckman claims it was these messages of peace and love which led to Chapman - who is still incarcerated in prison for shooting the musician - being targeted by rival aliens determined to stop the 'Gimme Some Truth' singer from spreading his messages of love.

Luckman added: "When Chapman blamed the devil for ordering him to kill Lennon, he may have indeed been operating under the influence of negative entities who were upset with John's universal message of brotherhood and wanted to stop him dead in his tracks before he could become even more powerful.

"The circumstances that led to Lennon's death can easily be seen as a classic battle of light and dark forces, in this case a battle for the soul of rock 'n roll."

When describing the songwriting process, Lennon himself claimed he often "felt like a hollow temple filled with many spirits, each one passing through me, each one inhabiting me for a little time and then leaving me to be replaced by another".

While his widow Yoko Ono has previously stated she believes her deceased husband and his Beatles bandmates - Sir Paul McCartney, Ringo Starr and the late George Harrison - were musical "mediums".

She is quoted as saying: "They were like mediums. They weren't conscious of everything they were saying, but it (the music) was coming through them." - TheSpec

I received this information today:

My great-uncle, Henry McKay, was a pioneer UFOlogist. He was the very first Director of MUFON for Canada. He was also one of the first modern-day UFOlogists to specialize in investigating physical traces associated with UFO landing sites and "close-range" UFO sightings. He was an electrical engineer with the Air Force. He was also on the Board of Directors for the "North American UFO Federation" (headed by Richard Haines), was an associate of CUFOS, and also investigated for NICAP. He was good friends with Dr. J. Allen Hynek. He also gave a briefing at a hearing to the "Royal Commission of Electric Power Planning" in regards to UFO related power disturbances.

I have released rare footage of an interview about reported abductions which features Budd Hopkins, Dorothy Wallace (abductee), and Debbie Tomey (the real name of the woman who the book and movie "Intruders" featured). I uploaded the video here: http://www.youtube.com/watch?v=W580PNm0nnI

Thank you for your time.

All the best,
Michelle McKay

I look forward to receiving more archived information in the future...Lon

Witnessed; The True Story of the Brooklyn Bridge UFO Abductions 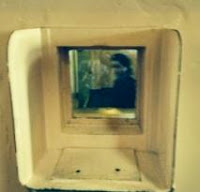 The ghost of Alcatraz: Tourists spooked by photograph of young woman waiting in the notorious prison’s visitation block

Moon Getting a Bulge – Blames the Earth