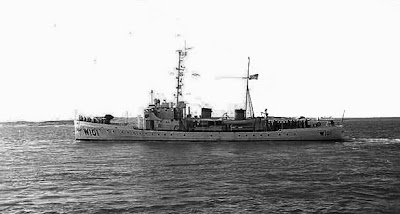 A former U.S. Coast Guard sailor recalls an incident with a “transparent, oval-shaped craft” that moved within 200 yards of his vessel that revealed a “humanoid pilot” before quickly disappearing, according to June 13, 2014, testimony in Case 57018 from the Mutual UFO Network (MUFON) witness reporting database.

The incident occurred in late 1978 or early 1979 near Cuba on a “law enforcement Coast Guard cutter” while the witness was standing near the fantail with another sailor when the object was first seen.

“I witnessed a transparent, oval-shaped craft that cut across the back of the ship maybe 100 to 200 yards away,” the witness stated.
The witness got a good look at the craft.

“I could clearly see a frame inside the craft and the humanoid pilot as he abruptly turned to look at us.”
But the sighting was quick.

“As it glided from off to the backside to the back of the ship, in the blink of an eye it vanished. Many years later I found something online that looked exactly like the creature I witnessed.”

No images or illustrations were included with the MUFON report. MUFON International is investigating. Read more at OpenMindsTV

Our Interplanetary Future: A UFO Primer for Skeptics

The Nephilim Chronicles: Fallen Angels in the Ohio Valley

A part of North Carolina came dangerously close to being obliterated in 1961. A newly declassified report discusses a US bomber that broke in half while flying over the state in January of that year, causing the two nuclear bombs it was carrying to plummet to the ground near Goldsboro—and reveals that those bombs came much closer to detonation than was previously known. A parachute opened for one of the bombs, which landed intact; the safing pins that conducted power from a generator had been pulled, preventing a blast. Still, it completed five of the six steps to detonation, Fox News reports. Had two cockpit wires touched as the plane disintegrated, it could have exploded. As for the second bomb, it landed in a freefall, which caused the switch to flip to the "armed" position, RT reports.

What kept it from going off? "The shock also damaged the switch contacts, which had to be intact for the weapon to detonate," the National Security Archive's Bill Burr explains. The incident was first mentioned in a book by Eric Schlosser last year, but the report confirms just how close the US came to devastation. As CNN points out, the MK39 bombs had an explosive yield of 3.8 megatons; the bombs dropped on Hiroshima and Nagasaki were 0.01 and 0.02 megatons, respectively. "There would have been a 100% kill zone for 8.5 miles in every direction," said the Air Force weapons specialist tasked with disarming the bombs. "By the slightest margin of chance, literally the failure of two wires to cross, a nuclear explosion was averted," Secretary of Defense Robert McNamara said at the time. - Newser

The impressive designs are based on Harold White's real-life work developing a genuine warp drive.

White, who is head of NASA's Advanced Propulsion Team, has been attempting to go where no physicist has gone before by designing a warp drive that will enable spacecraft to travel faster than the speed of light.

These new conceptual drawings based on his work were created by artist Mark Rademaker who took over 1,600 hours to make them. The impressive warp speed spaceship certainly looks the part and wouldn't seem out of place in an episode of Star Trek.

"There's no speed limit on the expansion and contraction of space," said White whose warp drive concept involves bending space both in front and behind the vehicle to propel it forwards.

"You can actually find a way to get around what I like to call the 11th commandment: Thou shall not exceed the speed of light." Read more at CNN

What Did I See?

My wife and I were asleep and I heard tapping on the window that woke me up. I just rolled over and I mumbled "ignore it babe" vaguely in my sleep. It was very annoying because I had the next day off so I was actually planning to have a lay in — my one day off and I get woken up in the middle of the night. Rolling over and checking my phone time it says 2:34AM. I sense that I needed to use the bathroom and make my way out of bed. While opening the bedroom door I can see small red lights that appeared in our hallway and by now I'm fully awake. The lights were only there for a few seconds but were very bright and I shrugged it off as car lights. I know I wasn't thinking right and a part of me knew that it wasn't, but I honestly just wanted to do my business and then go back to bed.

Halfway down the hall I get to our toilet and fling on the light. I do my business and wash my hands. While wiping my hands onto our towel I quickly see something run past the door. I mean fucking run! We have no dogs because im allergic and we don't have any kids yet.

Immediately my back is up and I slowly creep out of the hallway and fling on the lights. (so many horror films i've seen just walk out in the dark to investigate like wtf?) I make my way slowly to the bedroom and I double lock the bedroom door.

I figured that it was just some animal that somehow found their way into our house and me turning on the lights scared it away. I'd also like to see an animal undo a double locked door. I thought that i'd deal with whatever aftermath tomorrow morning.

I must have fallen asleep because I awoke to the light just creeping in from the curtains. Turning over to cuddle my wife I can see shes already awake and staring up at me. Her eyes straight away go from looking at me to the middle of the room.

In the corner of the room I saw the light creeping over to what looked like a small child, but it was shaped differently. It was hairless, had a massive head and it's arms appeared to be longer than its legs. I imagined when it walked its arms must have dragged behind him or whatever. It was very very very skinny and it was crouched over on its knees just looking at the floor.

My eyes adjusted to what i'm actually seeing and the fear and the dread washed over me. I grabbed my revolver that I leave on the bed stand in one quick move and shakily pointed it at this being. My wife quickly turned on the bed stand light. It started to lift its head up to me and had the biggest..blackest eyes i've ever seen. It only had a slit for a mouth and it didn't have any ears at all. Its still got its hands over its knees but now staring straight at me and for a second I was transfixed to staring into those eyes. I honestly felt that it was scanning me or searching me with them.

It got up and it must have been around the height to come to my hip. It's still staring at me and I swear to you there was a very bright flash and the thing was gone. I don't know where it went, how it managed to get through 2 double locked doors. Where was the light? What even was the light? Where did the thing go?!

I can't explain it but after the light there wasn't anything but my wife and i. I searched the dresser incase it may have jumped in there but nothing. I quickly grabbed my wife and we frantically went over to the neighbors house. Banging on the door my neighbor (that i've only met twice) came to the door saying "do you know what time it is?! oh shit. come inside"

He says he must have known something had happened for us to be running over there in the middle of the night. We're now in his kitchen and i broke down in tears. I explained everything and how I failed at protecting my wife. I stressed my concern and confusion as to what this thing is or how it managed to get in and even out.

My neighbor opened the whisky bottle and said that we can stay there for the rest of the night. Him and I sat up talking while my wife curled up next to me on the sofa. She didn't want to go anywhere without me or have her out of my sight. The next morning the three of us went back to our house and throughly searched the place. I straight away took the hallway.

We didn't find a single trace of a break in. Everything was where it was left and nothing was out of place.

Explanations to what I saw? - Reddit.com

A Short History of the Executioner

Is Schizophrenia Caused by Demonic Possession?


Gobekli Tepe: Genesis of the Gods: The Temple of the Watchers and the Discovery of Eden

History Decoded: The 10 Greatest Conspiracies of All Time

Exo-Vaticana : Petrus Romanus, Project L.U.C.I.F.E.R. And the Vatican's Astonishing Plan for the Arrival of an Alien Savior