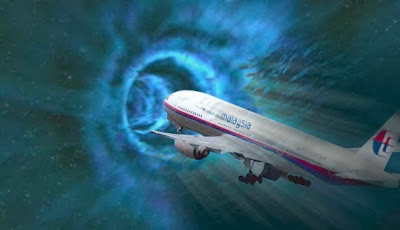 There's only so much "breaking news." After more than a week of wall-to-wall coverage on the missing Malaysia Airlines Flight 370, much of it baseless speculation from vaguely defined experts, CNN today resorted to the most baseless of speculation from a certifiable non-expert about what "supernatural" or conspiratorial explanations there could be for the disappearance.

"It's where every conspiracy falls apart: How do you keep everyone quiet?" offered Brad Meltzer, an author of political thrillers and host of the History Channel's Decoded. "I'm glad you brought that up," said host Don Lemon, who proceeded to make things much stupider.

"Especially today, on a day when we deal with the supernatural, we go to church, the supernatural power of God. You deal with all of that," said Lemon, making little to no sense. "People are saying to me, why aren't you talking about the possibility — and I'm just putting it out there — that something odd happened to this plane, something beyond our understanding?" Just putting it out there!

Meltzer was more than game to offer nothing of substance. "We all kind of roll our eyes at conspiracy theories, but what conspiracy theories do is they ask the hardest, most outrageous questions sometimes," he said. "But every once in a while, they're right. And that's what we have to remember here. I think why it's captured our attention is because there's no logical explanation right now."

"You can say, oh, it crashed into the ocean, but where are the parts? Where are the pieces? Why did it keep going for seven hours? Why do you have a guy onboard who gives his watch and his ring to his wife and says keep this for my boys in case something happens to me?" he continued.

"Something smells wrong," he concluded, having added negative knowledge. "It just smells terrible. How does a jet liner, with almost 200 people on it, disappear? [Ed. note: There were 239.] How are they just gone?"

You can get this kind of trenchant analysis 24 hours a day, if you hate yourself. - NY Mag

Alien Crossroads: Through the Wormhole

You might still hear about a UFO sighting or two in Maine - or maybe a report of a large beast in the woods. But it's much less common to hear modern accounts of the sea serpent. There was a time, though, when such sightings were much more common, and reported by upstanding citizens. In the latest installment of our occasional series, Maine's Hidden History, Maine Things Considered host Tom Porter turns once again to Portland historian Herb Adams.

Herb Adams: "Well, Tom, after lobsters, sea serpents might be Mainers' very favorite thing in the sea. We've seen enough of them going back over 300 years. For example, in July 1779, young Lt. Edward Preble of Portland - the future commander of Old Ironsides, the USS Constitution itself - saw, he said, a 44-foot sea serpent cruising around Muscongus Bay, up the Penobscot (River). Black, he said it was, body big around as a man, head reared six feet above the water. And Preble chased it with a swivel gun, firing away. The sea serpent ignored him totally and swam off to Louds Island, and slithered ashore into the woods."

Tom Porter: "You might think that a fantastical tale, but I guess Mr. Preble is a fairly reliable source, isn't he?"

Herb Adams: "Yes, and Preble was always glad to talk about it, too. Experienced men of the water, such as him, clearly saw something, and usually would stand by what Sea Serpents 7they said. Here's an example: A hundred years later, August 1874, the schooner Emily Holder. Captain Edward York told the Portland Daily Press that on the 22nd of August, when his schooner was about 10 miles southwest of Matinicus Island, and moving at a three-knot breeze - that's pretty good - about 500 yards off he saw the sail of a huge swordfish. As they got closer they saw a huge neck projecting out of the water, about 10 feet. The neck was as big around as a barrel, he said. The schooner attempted to get near to the creature, but the creature dove, and as he did - these are the captain's own words - he 'brought his tail around with a whisk, the end of it striking the stern of the schooner with a slap that made the craft shiver and set the crockery spinning in pantry.' Now that has the ring of truth to it.

Now here's another one from the 20th century: In the year 1958, right off Cape Elizabeth near Portland Head Light. There, a fisherman named Ole Mikkelson was out Sea Serpents 6very early one day in the fog, then all of a sudden out of the haze comes what he thought was a submarine. But as it came closer he and his crew discovered it was something alive. It was light brown, looked well over 100-feet long, its tail was like a mackerel and its head stuck out of the water, but it was broader than the neck. He couldn't see ears or eyes but obviously the creature had both, because every time the foghorn on the light ship Portland sounded, the creature turned its head in that direction. And as it came near it would dive down, its tail would come out of the water, it would come up loud and splash and go down slowly again. Three or four times in three or four minutes it did this. Then it came up and stopped as if to look them over - clearly it could see. And then it swam away back into the mist, literally into mystery.

Tom Porter: "Pity Mr. Mikkelson didn't have an iPhone on him, we could have some video evidence."

Herb Adams: "That's right, or the serpent could have called him and announced he would be coming."

Tom Porter: "Any evidence, Herb, that the serpents have ever hurt anyone in Maine waters?"

Herb Adams: "So far as we know, not - at least no one's come back to tell us about it."

Although there's no photographic evidence of Maine's sea serpents, Adams says there have been more than 75 reported sightings over the years - and one of the beasts was even given a name.

Herb Adams: "You know, much like the Loch Ness monster is nicknamed Nessie, the Maine crypto-zoologist Loren Coleman has nicknamed Casco Bay's sea serpent Cassie. And it may, in fact, be a permanent resident - it's been seen fairly frequently, right into the 20th - and, let us hope - the 21st century. It's good, Tom, to have a little mystery left in the world, and in the water, don't you think?" - MPBN

The Great New England Sea Serpent: An Account of Unknown Creatures Sighted by Many Respectable Persons Between 1638 and the Present Day

While some people tend to disregard the paranormal as just shadows and creaky floorboards, others decide to dive further into the unknown. Samantha Harris decided to do just that.

Samantha Harris is a spiritual healer, demonologist, paranormal investigator, and founder of the Michigan Paranormal Research Association. From working on shows for the Travel Channel and the Destination America Channel, Harris now works as a Marketing Communication specialist at the University Center for the Development of Language and Literacy at the University of Michigan in Ann Arbor.

Among her many studies, including receiving a Bachelors degree in communications at MSU, Harris is now a published author of Fighting Malevolent Spirits: A Demonologist's Darkest Encounters

Her book goes over several cases in Michigan, including Novi, Flint, and Lansing, that will make the hair on your neck stand on end.

Harris says demonology is the study of inhuman entities, such as fallen angels, and they can't be explained by scientific means. - WKAR

The experts believe they will be able to extract high quality DNA from the remains which have undergone a unique autopsy in Yakutsk, capital of the Sakha Repblic, also called Yakutia. There was palpable excitement among the team which included scientists from Russia, the UK, the USA, Denmark, South Korea and Moldova.

Radik Khayrullin, vice president of the Russian Association of Medical Anthropologists, said in Yakutsk: 'The data we are about to receive will give us a high chance to clone the mammoth.'

He immediately called for responsibility in bringing the ancient beast - a native of Siberia - back to life, urging that this is not done to play God.

'We must have a reason to do this, as it is one thing to clone it for scientific purpose, and another to clone for the sake of curiosity'.

But theoretically the possibility exists that this female mammoth will become the parent of the first of the species to walk the planet.

Mr Khayrullin also acknowledged that the mammoth cannot be identical to the creatures that become extinct between 4,000 and 10,000 years ago.

'It will be a different mammoth to the one living 43,000 years ago, specially taking into account that there will be interbreeding with a female elephant.'

If and when experiments begin, an elephant will be the surrogate mother, enabling the species to be brought back from the dead. Read more at SiberianTimes

Dozens of Planes Have Vanished in Post-WWII Era