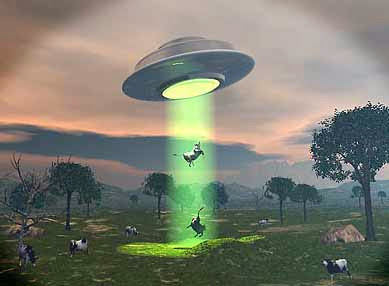 A disturbing chain of livestock mutilations has plagued farmers and ranchers throughout all 50 states for decades, but law enforcement has failed to name a perpetrator.

Cows, horses, goats, and other livestock have been randomly found dead—the corpses mutilated and organs removed with surgical precision. With each of these attacks, no tracks of any kind surround the site, perplexing ranchers and law enforcement.

Many theories surround this mysterious and persistent wave of attacks. Suspects include predatory animals, satanic cultists, extraterrestrials, and even the U.S. government. To this day, no arrests have been made even though more than 10,000 attacks have been recorded throughout the country, according to KLAS-TV Las Vegas.

These cases stand out from regular predatory attacks on livestock. Their surgical nature is eerie and unexplainable. Colorado rancher Tom Miller recalled his first encounter with the mysterious mutilations: The eyes, ears, tongue, and reproductive organs had been removed from one of his cows with surgical precision. No blood was found onsite, which is typical among the mutilation attacks. Miller said that his cattle have been periodically attacked in this way since 1999, according to Science Channel’s “The Unexplained Files.”

Adding to the bewilderment are the fractured bones, including ribs, inside the carcasses of the mutilated animals, suggesting that the animals were taken, operated on, and then dropped from an elevated height.

Supporters of the extraterrestrial theory suggest that aliens take the animals aboard their craft and then discard the remains, according to the “Unexplained Files.” Ufologists—those who study UFOs—believe that the mutilation of these animals represents a need for bodily tissue in order to create alien-human hybrids. This claim is perhaps lacking in evidence, but in many cases of cattle mutilation, the reproductive organs were removed—embryos included. In the scientific community, cow embryos were used in human cloning attempts by the company Advanced Cell Technology in 1999, reported the BBC and NewScientist news.

A more terrestrial explanation comes from alien theory skeptic Chris O’Brien, who suggests that the mutilations are conducted by our own government in an effort to avoid disease outbreak, such as mad cow disease, also known as bovine spongiform encephalopathy (BSE), which is believed to cause the human disease called variant Creutzfeldt-Jakob disease (vCJD). According to O’Brien and “The Unexplained Files,” many of the tainted animals from the 1996 BSE outbreak in England were destroyed, turned into fertilizer, and transported around the world—including to American farmland.

Despite the persistent anomalies of these livestock attacks, skeptics hold that they are nothing more than predatory animal attacks. - The Epoch Times

The San Antonio Spurs are on a terrific run just now, winning 14 straight to put them top of the Western Conference.

Overcoming difficult opponents in recent weeks they have produced some of their best basketball this season.

And all, it seems, despite having to deal with some paranormal activity on their recent road trip.

As reported by San-Antonio Express-News, both Tim Duncan and Jeff Ayres were freaked out after a night at the Claremont Resort in Berkley ahead of the Spurs' game against Golden State Warriors:

"I get to my door, and my key doesn't work, but it sounds like there's somebody in my room," explained Ayres.

"Like I hear a little baby, not crying but making noise. I'm like, 'What the heck?' I keep trying my key and it doesn't work."

"It was the creepiest thing. I heard a couple of other guys heard babies in the hallway, kids running down the hallway. Creepy. I really heard voices and a baby in the room, and there wasn't anybody in there."

Spooky indeed. And veteran Duncan backs up his teammates story.

"I heard a baby in his room.

"When they told me the story the next day about calling up there and no one in the room, it's at that point you get chills," said a clearly flustered Duncan.

The Spurs obviously managed to put thoughts of ghosts and ghouls to the back of their minds as they overcame the Warriors 99-90 last week.

But Duncan is planning on a new location when they are next in the Bay Area:

"I heard about the history of the place, and I'd rather not (stay there again)," said the 37-year old. - GiveMeSports

A Ghostly Guide To California

Ghosts of California: The Haunted Hotels, Inns and Bed and Breakfasts 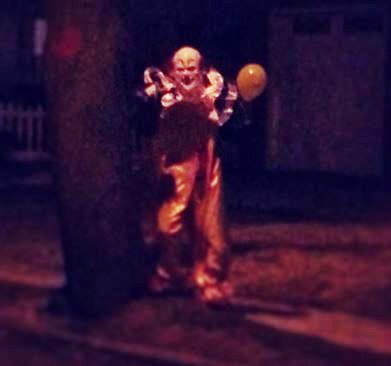 We at the Observer would advise skipping this story if you plan on sleeping without horrific nightmares ever again.

If social media is to be believed, there is a man dressed as a clown wandering around Staten Island at night. Witnesses describe him as bald, wearing a trademark blue and yellow clown suit, holding balloons and OH MY GOD LOOK AT THIS PICTURE.

The clown, which has reportedly been spotted hanging around the Grasmere and Richmond Valley train stations according to the SI Advance, has been snapped three times and uploaded to Twitter and Instagram, providing both internet buzz and nightmare fuel.

“He was just kinda standing there waving like he is in the picture,” Westerleigh resident Vincent Innocente told the paper of his experience meeting the poor-man’s Pennywise on Sunday. - Observer 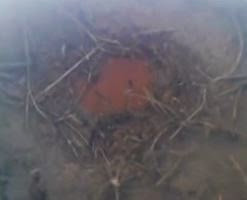 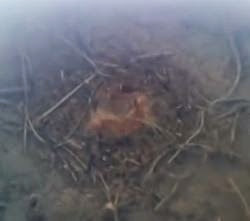 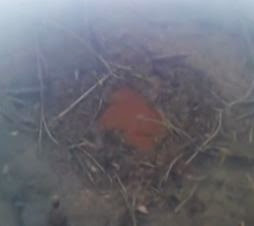 What in Hell is THAT?

Click for video - Strange Phenomenon - WHAT THE HELL IS THAT?

A reader Cryptid Hunter forwarded this to me:

Witness report: So I was walking with my dog in the evening just before sunset, we were travelling into vast fields of nature to escape common modern view.

By accident I found a pond. It catched my interest since i saw a waterhole in the middle of it. Usually people drills waterholes in their ponds where fish lives, at winter time, so fish can breathe.

I thought I will see some fishes and stuff... But as soon as i came closer, I noticed that it was evaporating. You can't see this in the video since I was filming with my phone which has not a high resolution camera.

Natural Gas or oil? Impossible, it is not hot and why only the part of this whole pond is melted just above this thing/activity-reason?

At first glance, it looks like a jellyfish, but it is not. What was really there is still unknown for me.

Was the Wooly Mammoth Done In by an Extra Rib?


Legends: Stories By The Masters of Modern Fantasy

Giants, Monsters, and Dragons: An Encyclopedia of Folklore, Legend, and Myth