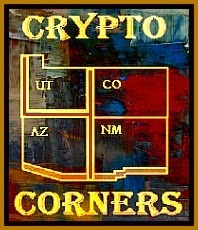 I was recently contacted by JC Johnson of Crypto 4 Corners in reference to a witness report describing a series of unknown tracks. When JC and his team arrived at the location near Crownpoint, New Mexico, they discovered a track line of approximately 1/4 mile in total distance. The tracks were 18" in length and 6" wide at the toes, and identified as hominid (or 'Furry One' by the locals). The track line was fresh with a stride of 5-6 feet and extended into a small valley, where the prints abruptly stopped. It is interesting to note that the last several prints were deep and the stride extended up to 7 feet...to where the track line ended. I'm not suggesting that this cryptid suddenly gathered a head of steam and 'flew off'...but the evidence is of high strangeness. 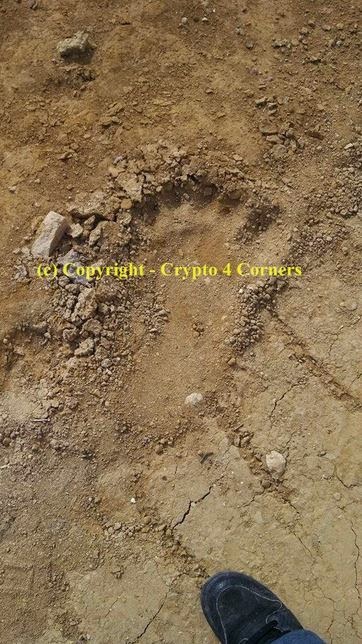 The Navajo Rangers and Navajo Criminal Investigations had previously examined the track line and noted that the prints abruptly ended. From the witness' statement, these officials were 'freaked out' when this irregularly was seen. Because of this peculiar observation, Crypto 4 Corners was called to the scene.

Was this hominid that residents have referred to as the 'Crownpoint Howler?' In December 2011, the NatGeo television show Navajo Cops, along with the film crew and several Navajo police officers heard the eerie noise that has been plaguing Crownpoint residents since July and were able to record it.

Navajo Cops Producer/Director Sam Dolan noted he was saving it to air as part of the TV show, but Navajo Nation Police Lt. Calvin Begay of the Crownpoint station said he had heard the recording and it's quite distinct. "They definitely got something," he said.

After carefully investigating the track line, which included a knuckle print and other artifacts, JC concludes that this particular 'Furry One' was 10-12 feet in stature and 900-1100 lbs.

Over the years, there have been several reports of exceptionally large Furry Ones through out the Four Corners area, which includes the Diné Navajo Reservation.