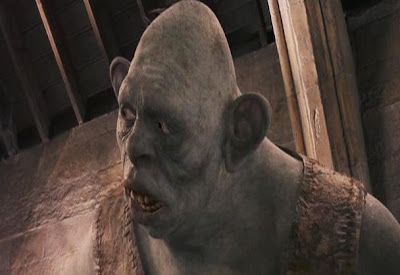 LONDON (Cryptozoology News) — As the residents of flood-devastated Southern England brace for the incoming monster storm “Ruth”, another person from the region is dealing with a different sort of nightmare.

The 25-year-old student, who spoke on condition of anonymity, told Cryptozoology News that he saw “a troll looking creature” running erratically across the flooded fields in farmland last week on a train headed to London.

“I came home to the village to visit my parents before getting back to London,” he said. “I planned on staying there longer, but I was afraid the trains would be cancelled.”

On his way back to the country’s capital, he explained, an incredible occurrence took place.

“You have got to see it to believe it. I fell asleep a few times, I was zonked. When I wake up, the sun is almost down, I look through the window on my left and I thought I’d lost the plot. I see a three meter tall fat bloke running through the soggy fields, water up his knees. I was gobsmacked.” Read more at Cryptozoology News 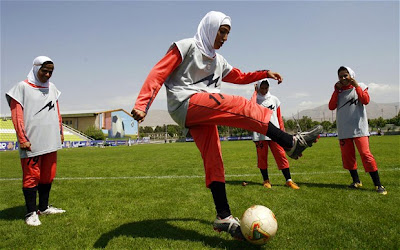 Footballers in Iran's professional women's league are to undergo mandatory gender tests to establish that they are fully female.

The country's football governing body is bringing in the random checks after it was revealed that several leading players - including four in the national women's team - were either men who had not completed sex change operations, or were suffering from sexual development disorders. Gender change operations are legal in Iran according to a fatwa - or religious ruling - pronounced by the late Ayatollah Ruhollah Khomeini, spiritual leader of the 1979 Islamic revolution. The law contrasts with the strict rules governing sexual morality under the country's Sharia legal code, which forbids homosexuality and pre-marital sex.

Medical examiners will turn up unannounced at training sessions of teams playing in Iran's women's premier league, as well as those playing in the indoor league, known as footsal. Ahmad Hashemian, head of the Iranian football federation's medical committee, said the clubs themselves were now obliged to carry out medical examinations to establish the gender of their players before signing them on contracts. Those unable to prove they are female would be barred from taking part in the women's leagues until they underwent medical treatment, he said.

"If these people can solve their problems through surgery and be in a position to receive the necessary medical qualifications, they will then be able to participate in [women's] football," Mr Hashemian, a qualified doctor, said. Sex changes are commonly carried out in phases in Iran, with the full procedure taking up to two years and including hormone therapy before the full gender transformation is completed. Seven players have already had their contracts terminated under the federation's gender test directive. Football is highly popular among many Iranian women, despite religious rules that bar them from entering stadiums to watch matches between male teams.

Scientists have come across the strongest evidence to date that water still flows on the surface of Mars.

While it is well known that Mars was once home to vast oceans and rivers of liquid water, the case for flowing water on its surface today has been a difficult one.

The best evidence available to suggest that water can still exist in liquid form on Mars focuses on dark, finger-like flows known as "recurring slope lineae" that appear to advance down geological inclines during times when the temperature increases.

Now new data from NASA's Mars Reconnaissance Orbiter seems to suggest that the flows correspond to seasonal changes in iron minerals at the same locations as the dark patterns observed on the slopes. The potential conclusion is that these are indeed liquid water flows and that they are made possible thanks to an iron-mineral antifreeze.

"We still don't have a smoking gun for existence of water in RSL, although we're not sure how this process would take place without water," said Lujendra Ojha at the Georgia Institute of Technology. "Just like the RSL themselves, the strength of the spectral signatures varies according to the seasons. They're stronger when it's warmer and less significant when it's colder." Read more at JPL NASA

The NASA Conspiracies: The Truth Behind the Moon Landings, Censored Photos , and The Face on Mars

Mission to Mars: My Vision for Space Exploration

It may sound like the beginning of a horror movie, but burial sites found on a college campus have created a potential nightmare for administrators.

While surveying land for a new parking lot at the University of Mississippi Medical Center, officials made a grisly discovery: more than 1,000 bodies thought to have been patients at the old Mississippi State Lunatic Asylum.

The unnamed, century-old graves present a problem for the university, whose expansion plans could be halted over the cost of relocating the bodies.

Dr. James Keeton, dean of the medical school, said that moving the remains to a new burial site would cost an estimated $3 million -- that's $3,000 per body.

"We can't afford that," Keeton said, according to USA Today.

Instead of moving the bodies, the expansion will most likely be relocated to another location on the 164-acre campus. It's possible there could be more unmarked graves belonging to tuberculosis patients, former slaves, or possibly even Civil War dead, according to the Clarion-Ledger.

Experts think that future additions to the medical center and other buildings on campus will have to be reconsidered.

Opened 1855, the Mississippi State Lunatic Asylum operated on the UMMC site until 1935, when it moved to its present location at Whitfield, according to USA Today. - THP

Have Researchers Cracked the Case for Past-Life Memories?

Listen to the Voice of Aleister Crowley, Chanting in the Language of the Angels

The end is not near