Podomatic - The Todd Sees Briefing on Beyond The Edge Radio

Stitcher Radio - The Todd Sees Briefing on Beyond The Edge Radio

Well...here it is folks! The Todd Sees Briefing on Beyond The Edge Radio....the most listened to LIVE show in BTE's history. If you have questions, you can contact me here or through the radio show website. Enjoy...Lon

In the early morning of August 4th, 2002, Todd Jeffrey Sees rode his ATV, starting at his home at the base of Montour Ridge in Northumberland County, PA. (Point Township), on a short jaunt up a mountain trail adjacent to a sprawling high power line. After he failed to return home by noon, the family became concerned and notified the authorities.

A massive search effort ensued...which included search & rescue personnel (with search dogs and helicopters), local & state police, as well as an organized search team that numbered 200+ volunteers. The entire area from the top of the ridge, adjacent woods and the family property was explored...including a small pond located 70 feet from the Sees house. Divers and dogs searched the area in and around the pond...without success.

The effort continued for approximately 36 hours...until the evening of August 6th, a family member noticed something in the bushes around the fore-mentioned pond. Todd Sees body had been discovered...in an area that was heavily searched the previous day.

Since that time, there has been very little information released to the public. The death was ruled as 'fatal cocaine toxicity'...despite evidence suggesting that something else most likely occurred. The circumstances involving the recovery, handling, autopsy and final arrangements with the body are also mired in controversy.

A joint investigation by Butch Witkowski / Cold Case Unit of the UFO Research Center of PA and the Phantoms & Monsters Fortean Research team has uncovered previously undisclosed information in regards to this incident. This briefing will include objective & authentic discoveries...and the roundtable discussion will present an opportunity for the participants to fashion plausible scenarios as to what may have actually occurred.

IF YOU CAN OFFER INFORMATION ON THIS CASE, PLEASE GO TO UFORCOP Contact or Phantoms & Monsters Fortean Research 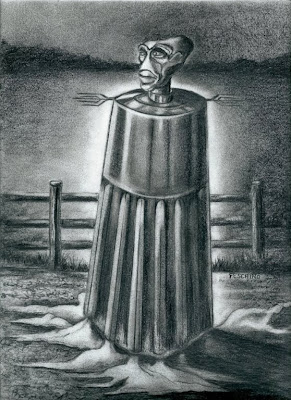 Last month I posted an article regarding yet another firsthand witness who had come forward to explain that he was seemingly involved in the "Flatwoods Monster" affair of September 1952. In that article, the new Braxton County witness contacted Frank Feschino, Jr. with information about his sighting occurring on his family's property in "Strange Creek" WV, during the early morning hours of September 13, 1952. The witness, a boy at the time, had described to Frank a large 8-9 foot-tall, glowing, if metallic-looking structure, which was gray/aluminum in color, and hovering up the driveway toward his home!

Yes, reader, there does seem to be a direct connection between this incident and the "Flatwoods Monster" encounter on the Fisher Farm, as well as the "Frametown Monster" incident involving the Snitowsky family occurring September 13, 1952. See, the tiny town of "Strange Creek" is located just southwest of Frametown, where the Snitowsky incident occurred later that night. Frank had called me and explained the incident after speaking to the witness that afternoon. Subsequently, I wrote the article, "Frank Feschino and the Incident at Strange Creek." Continue reading at UFO Magazine

The Braxton County Monster: The Cover-Up of the Flatwoods Monster Revealed 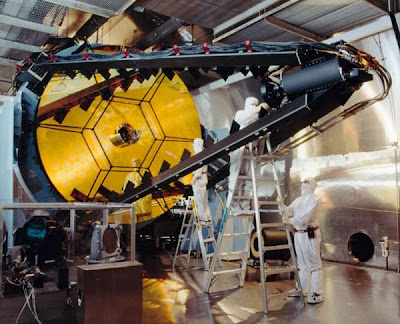 Defense contractor Lockheed Martin has successfully demonstrated a 30-kilowatt fiber optic laser for military applications. It's one of the most powerful lasers ever seen — and a major step forward to getting directed-energy weapons on the battlefield.

Described as a "weapons grade" laser, the 30-kilowatt beam combines many fiber lasers operating a slightly different wavelengths into a single "near perfect" band of light. Lockheed says the upgraded system produced the highest power ever documented while still retaining beam quality and electrical efficiency and using 50% less electrical power than solid-state lasers.

Eventually, these systems could be installed on military platforms such as aircraft, helicopters, ships, and trucks.

"The high-energy laser serves as the heart of a laser weapon system," said Ray O. Johnson, senior vice president and chief technology officer of Lockheed Martin. "This 30-kilowatt milestone shows our commitment to producing the high-beam quality and high power needed to address a variety of military 'speed-of-light' defensive operations."

Ideally, a high power 100-kilowatt system will be required to effectively destroy military targets like enemy artillery or drones. It'll also have to maintain near-perfect beam quality over long distances. What's more, electrical efficiency will be crucial to ensuring the system can be cooled effectively and made manageable in size. - io9 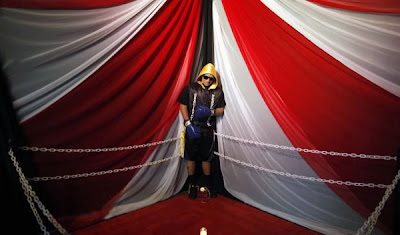 Even in death, Christopher Rivera Amaro almost looked ready to box, leaning against the corner of a simulated ring.

Mourners who came to his wake in San Juan on Friday found him posed afoot, a yellow hood on his head, sunglasses glasses over his eyes and blue boxing gloves on his hands.

Elsie Rodriguez, vice president of the Marin Funeral Home, said Rivera's family wanted to stress his boxing. The funeral home suggested posing him in a ring.

The makeshift ring was set up in a community center of a public housing complex. Rodriguez told The Associated Press it took them several hours to create the scene.

The funeral home has staged similar wakes for others. One featured a deceased man riding his motorcycle.

The 23-year-old Rivera had a 5-15 record in the 130-pound weight class. Police said he was shot dead Sunday in the city of Santurce. No one has been arrested. - MSN

Police carried out a 'big game' hunt today after a bus driver reported seeing a six foot crocodile on the loose.

Avon and Somerset police Chief Constable Nick Gargan told his Twitter followers that a bus driver flagged down an officer claiming to have spotted the large reptile under a bridge.

Gargan tweeted: "One of our officers was flagged down by a bus driver today, claiming to have seen a 6ft crocodile under Coronation Bridge. We can't find it."

Officers searched for the beast but were unable to find any trace under Coronation Bridge, Bristol.

A spokesperson said: "We were called at 10:28am on Monday, February 3, to reports of a crocodile sighted on Bedminster Bridge.

"We carried out a search of the area but found no trace of the reptile."

Since the police search, someone has started a Twitter profile for the crocodile naming it Chris the Croc.

Bristol's mayor George Ferguson has already been in touch with Chris the Croc through Twitter. - Bristol Post

Argentina: UFO "Took Away The Jellyfish" from Monte Hermoso

The Strange Disappearance of James Worson