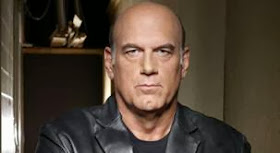 Former Minnesota Gov. Jesse Ventura said he lives "off the grid... so that the drones can't find me" in an interview with CNBC's "Closing Bell" on Tuesday.

“I’m off the grid. I move about with my TV show so that the drones can’t find me and you won’t know exactly where I am,” Ventura said, telling the hosts he was doing the interview from an “undisclosed location in Mexico."

Ventura is currently promoting his show "Off The Grid" on Ora TV. The former wrestler said the show makes him a "job creator" that's keeping people from coming into the United States illegally.

“And I’m not only creating jobs, putting Mexicans to work, I’m stopping them from running across the border now and taking our jobs, because my whole staff said that if I wasn’t down here, and I didn’t have them, they’d be coming up to America, looking for jobs," Ventura said. - THP 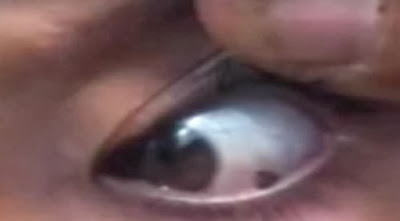 Doctors have been left baffled by a little girl who appears to cry stones instead of tears.

The news report by Yemen television channel Azal also shows a small box full of stones that dropped out of the girl's eyes in only a few hours, UK newspaper The Mirror reports.

Local doctors have been unable to explain the phenomenon, which has caused fear in rural areas where some believe Saadiya must be possessed by magic.

"This case in the second strange phenomenon in the region," the Azal journalist is reported as saying.

"The case has triggered panic in the area where this girl lives ... Some say the girl could be gripped by a magic spell while others say it might be the devil ... others fear it could be the start of a dangerous epidemic."

Earlier this year Rick Dyer made the news by claiming that he had not only located Bigfoot outside of San Antonio, but that he has shot and killed the legendary creature. Now, he will be the guest of the Alamo Drafthouse as he presents the corpse for all to gawk and gander at in conjunction with a screening of a top secret Bigfoot-related film project to be announced later.

Manager Robert Saucedo calls it "quite possibly the greatest event I have ever been a part of in my short time as a programmer for the Alamo Drafthouse Cinema". He was avidly discussing the possibility of a Sasquatchploitation film festival at least as far back as last year's Comicpalooza. However, a significant number of cryptozoologists are asking that Saucedo cancel the event, claiming that Dyer is a conman.

There's a fair amount of evidence to back up those claims. Dyer became somewhat infamous in 2008 when he first started offering a Bigfoot carcass for perusal, a carcass that turned out to be nothing more than a frozen ape costume stuffed with opossum guts. There's also the matter of his 2011 arrest for eBay fraud, in which he allegedly sold two Corvettes that he never delivered.

"I can't speak for other cryptozoologists," said Ken Gerhard, author of Monsters of Texas

and other books on legendary creatures. "But honestly, an electron microscope couldn't measure my infinitesimal interest in Rick Dyer, or his paper mache model."

In a brief interview earlier this week Gerhard, who has also tracked sightings of Bigfoot on the edges of San Antonio, said that the spot that Dyer says he tagged the beast was less than 2,000 feet from a Starbucks.

Dyer readily admits to the 2008 hoax, but says that the shame involved prompted him to go on a real hunt. He says he accomplished his task by nailing ribs to trees as bait and picking it off while it snacked. These, and other helpful tips on killing Bigfoots (Bigfeet?) will be part of the celebration at Alamo.

"Even before this event was officially announced, both the Alamo Drafthouse Cinema and my personal Twitter account were besieged with messages and warnings form a small but vocal community of Bigfoot enthusiasts who don't exactly agree with Dyer's claims or methods," said Saucedo. "Their weapon of choice? Youtube videos. I love how this group believes the best way to present their message to the world is by setting it to a heavy metal soundtrack. Head bang to the 'truth!'"

Despite the protests it looks as if Dyer's appearance at Alamo Drafthouse will go forward. After all, if Saucedo had the guts to host live alligators in the theater then a dead Sasquatch isn't likely to faze him no matter how many YouTube videos or angry tweets are sent to him. So if you want to see what someone claims to be the body of the missing link you will get your chance. I'd keep a close eye on my wallet, though. - Houston Press

Authorities shot and killed a Florida man after he allegedly bit a teenagers face and attacked an ex-police officer.

Bradshaw said the man, who has not been identified, was walking naked down a Delray Beach street on Tuesday night when he, for no apparent reason, attacked a 66-year-old former cop.

Then the suspect allegedly assaulted an 18-year-old man, biting off a portion of his face, Bradshaw said.

Once police arrived, they were allegedly unable to subdue him until an officer shot him down.

"He’s obviously delirious on something,” Bradshaw said. “He is a huge guy. He takes a fighting stance. They’re trying to get him on the ground. He starts charging them. The Taser did not affect him.”

That's when an officer pulled his gun and shot the man three times. He died in a hospital either from his injuries or from the "narcotic" substance he was on, Bradshaw said.

The case comes nearly one year after another Florida case stoked fears of a zombie apocalypse.

In May, 2012, Rudy Eugene, 31, of North Miami Beach was shot multiple times during a grisly assault in which he apparently chewed a man's face almost completely off. - THP

High Conspiracy and Occultists Afoot at the Super Bowl?

Monsters of Maryland: Mysterious Creatures in the Old Line State