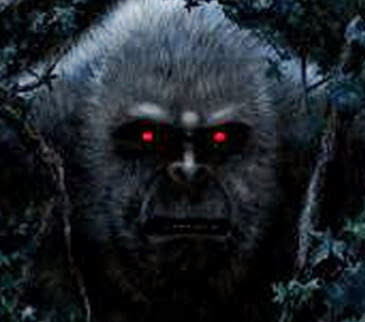 This is the story of a Scammon Bay man who ran into a Hairy Man on the trail to Hooper Bay. This happened in the winter of 2011.

Before he told his story, he shuddered at the thought of remembering the Hairy Man he had witnessed.

“I left Scammon Bay that day for Hooper Bay, by way of the Paimuit Trail,” he said. It was a trip of about 30 miles. The trip was uneventful, just like the many trips he had made in the past.

Soon he reached the Hooper Bay side of the hills. He went up one hill and was about to go over the next that led to a lake when he saw someone on the trail.

“I thought it was a Kass’aq wearing a big parka because he was so tall,” he said. He drove straight for the person, thinking the person had broken down somewhere and was walking to Hooper Bay.

But as he got closer, the person was getting weird-looking and unusual. “It’s arms were really long and it seemed to be hairy all over. It’s hair was like a musk-ox, but brown.”

The appearance of the person began to make him wary as he approached, so when he got within 60-70 feet away he turned his snowmachine to the right of the person instead of heading straight for him.

Another unusual thing about the person, the man said, was that there was no acknowledging him or his snowmachine while he was approaching. “He wasn’t turning around to check me or look at me,” he added.

An ordinary person would turn and wait for a snowmachine to reach them if they heard someone approaching, especially in the wilderness and so far away from a community if they needed a ride.

When the man got within 20 feet or less from the walker, the “person” finally turned its head toward him. All the man in the snowmachine remembers of its face were its red eyes!

“I think I screamed or hollered at that moment but I don’t know,” said the man, when he realized that what he had just approached was not a human. The next thing he remembers was gunning his snowmachine and taking off.

He sped away so fast to get away that he hit a bump that made him jump and land in the lake. “I landed so hard that I almost lost control of my sno-go,” he said. Then he kept on going at high speed all the way to Hooper Bay until he reached the village.

When he arrived in Hooper Bay, he went to his parents’ home and told them what happened. The parents asked if the creature was floating (as in ghostly apparitions) but the man said no.

On his return trip, he took the long way to Scammon Bay by way of Chevak and had one of his brothers accompany him on the trip.

“I didn’t want to run into the thing again,” he said. - Delta Discovery

Finding Bigfoot: Everything You Need to Know (Animal Planet)

The Sasquatch People and Their Interdimensional Connection

My Brother Is a Hairy Man: The Search for Bigfoot

Nearly 20 million gallons of Agent Orange were released over Vietnam between 1962 and 1971 as part of Operation Ranch Hand (motto: "Only you can prevent a forest") and its larger parent mission Operation Trail Dust. The powerful herbicide's purpose was to destroy foliage hiding Vietcong forces from view and to destroy civilian crops. But the side-effects of its use were even more dire, ranging from cancer to ravaging skin diseases. Both American forces and Vietnamese citizens and soldiers were plagued by the Agent Orange's health curse for rest of their lives, and it sometimes caused defects in the health of their children as well.

A new study published in the journal Environmental Research reveals that Air Force reservists were exposed to higher levels of the toxic chemical than previously known (or admitted). Many of the same aircraft that dispersed Agent Orange during the war were later used as transport vehicles during (relative) peacetime, primarily between the years 1971 and 1982. And tests taken many years after those transports show the planes still contained dangerous levels of the chemical. Initial testing of the planes after the war and before peacetime service was nonexistent.

The US Air Force and Department of Veterans Affairs have previously denied benefits to those exposed to the chemical from these planes, claiming it wasn’t a harmful level of exposure. Researchers have now proven this to be false. The study used the US Army's own algorithms and samples taken from the aircraft to estimate how much the post-war level of exposure would have affected the body, with the results demonstrating that the levels in those aircraft were unacceptable under USAF and VA policies.

"These findings are important because they describe a previously unrecognized source of exposure to dioxin that has health significance to those who engaged in the transport work using these aircraft," said lead investigator Peter A. Lurker. “Our models show that the level of exposure is likely to have exceeded several available exposure guidelines,” Jeanne Stellman, an Agent Orange expert at Columbia University, added. Veterans are automatically eligible for health benefits and disability if they were exposed to dangerous amounts of Agent Orange under the Agent Orange Act of 1991. Go to Science Direct for detailed report.

This video was forwarded to me recently. I find it very interesting...what are your thoughts? Lon

Man tries to feed himself to tigers...tigers take a pass

After 20 minutes of swinging yourself around, maybe you need to accept that it’s just not going to happen.

Referring to, of course, a man who had entered the Bengali white tiger enclosure in southwest China’s Chengdu Zoo, in hopes that the tigers would eat him.

On Feb. 16, 27-year-old Yang Jinhai climbed a tree to breach the enclosure.

He began to make “exaggerated movements” for 20 minutes to try to get the tigers to make a meal out of him. A meal? This guy would be a snack!

No such luck, anyway.

The tigers would not eat him. Maybe they'd prefer something else?

They merely left him with scratches and minor cuts after dragging him by the back of his neck. Perhaps they were just trying to knock some sense into him for climbing into a tiger cage.

“I asked them to bite me and let them eat my meat, and so I did not fight back,” said Jinghai, according to Chengdu’s Business Daily.

But the tigers did not want to eat his meat. Their diet clearly does not include small Asian men.

Zoo staff tranquilized the tigers so that they could get Jinghai out. He is now being treated for depression, in a tiger-free environment. - Yahoo

UFOs Finally Turn Up in Documents Leaked by Edward Snowden

The Telepathy Project: to sleep perchance to dream, to share the dreams that come

The Sikeston UFO Crash and Retrieval


UFOs and Government: A Historical Inquiry

A.D. After Disclosure: When the Government Finally Reveals the Truth About Alien Contact