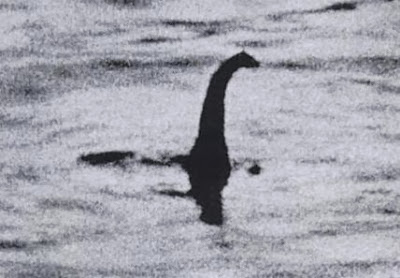 The Loch Ness Monster has disappeared, with no confirmed sightings of the legendary creature being recorded in 2013.

It is the first time in almost 90 years when the monster has failed to make an appearance.

Kevin Carlyon, the High Priest of White Witches in the UK, has claimed a spell he placed on the loch to protect Nessie from “exploitation of fraudsters” explains her non-appearance.

He said: “I personally believe Nessie is a ghost of a dinosaur, who has been regularly seen on the loch.

“But the spirit of the creature has been so exploited in recent years I decided to carry out an exorcism, hence no sightings of the monster.”

The white witch has vowed to return this summer to lift the spell and “put Nessie back”.

Veteran spotter Gary Campbell, of the Official Loch Ness Monster Club, keeps a register of sightings, but said no-one had come forward in 18 months with proof they had seen the monster.

There had been three reports of possible encounters, but these were immediately discounted as fakes or mistakes.

Bookmaker William Hill, which failed to pay out a £1000 prize for the best Nessie sighting for 2013, said the three entries to its contest could be explained – as images of a wave, a duck and a picture not even taken on Loch Ness.

Mr Campbell said it was the first time since 1925 that there had been no confirmed reports of the monster.

He said: “It’s very upsetting news and we don’t know where she’s gone.

“The number of sightings has been reducing since the turn of the century but this is the first time in almost 90 years that Nessie wasn’t seen at all.

“Pretty much everyone now carries a camera with them in their smart phone - this allows then to snap what they’re seeing and means that we don’t just have to rely on eyewitness evidence. As last year has shown, all the pictures and videos taken can prove to the expert eye that it wasn’t Nessie that was being filmed.

William Hill spokesman Rupert Adams said:”Although we had three entries, one was a wave, one a duck and the other wasn’t from Loch Ness - even the one other sighting for the year that wasn’t entered was a video of a wave.

Mr Adams added: “We’ve now more than doubled the odds of finding proof that Nessie exists to 250-1 and we’ve done a ‘monster rollover’ on the prize meaning that this year’s winner could be taking away £2000.”

Mr Campbell, a chartered accountant based in Inverness, has been logging Nessie sightings for 17 years after seeing something in the loch himself.

As Nessie’s registrar of sightings, he has put together a list of sightings going back 1,500 years.

Irish missionary St Columba is said to have encountered a beast in the River Ness in 565AD.

Mr Campbell said: “So far 1,036 reported sightings have been recorded and there were some in 2012.

“It could be a blip. I’m convinced that Nessie has just taken some time out and will be back with a vengeance this year.”

Mr Campbell has appealed to people to keep an eye out for the monster this year.

Ironically 2013 was the 80th anniversary of the first “modern-day” sighting of Nessie.

The local paper, the Inverness Courier, reported on 2 May, 1933, a Mr and Mrs MacKay, of Drumnadrochit, on the shores of the loch, saw something strange in the waters near Abriachan.

The story became a global sensation and the term, Loch Ness Monster, was coined.

The most famous and controversial hoax was the “surgeon’s photo” taken by Robert Wilson in 1934.

Published in the Daily Mail, it appeared to be a head and neck rising from the water and became one of the most famous images of Nessie.

At the time, Mr Wilson stated that he had only photographed “an object moving in Loch Ness”, but 60 years later he admitted it had been faked.

The best image to date which has not been explained was taken by Richard White, of Muir of Ord, in 1997. And in 2000, Bobbie Pollock of Glasgow is acclaimed to have the best filmed footage, with nobody being able to identify what is swimming around Invermoriston Bay for 18 minutes.

White Witch Kevin Carlyon said: “I will return this summer to lift my spell, and hopefully sightings of Nessie’s spirit will return.”

He said: “Given the number of unexplained sightings in the past, there is definitely something in the loch.

“Unfortunately, the only way of proving it is to have a body, and no one wants a monster washed up on the beach.”

The controversy around the existence of Nessie peaked in the 1960s when a Loch Ness Investigation Bureau was set up.

In addition to still and movie cameras positioned around the loch, the bureau had a team of mobile camera crews, sonar and airbourne searches.

Last year, Loch Ness Monster was placed ahead of the Himalaya’s Yeti in a list of “top 18 mysteries” for travellers to solve in 2014.

Wanderlust Magazine put Nessie at number three and the Yeti at 12.

Actor Charlie Sheen also recently spoke about his surprise search for the Loch Ness Monster - revealing that he hunted Nessie with a bottle of whisky.

He admitted he wants to return with American TV host Jay Leno to resume his monster hunt. - Scotsman

The Loch Ness Monster: The Evidence

The Loch Ness Monster and Other Unexplained Mysteries

A 53-year-old man told Martin County Sheriff's investigators that people were in his home and had abducted his 51-year-old wife.

He spoke of holograms and signals.

It was about 7 p.m. Jan. 24, and the man was "extremely agitated" as he stood in front of his rental trailer in western Martin County, according to a recently released report.

A deputy went in the trailer and noticed alcohol bottles, trash and other things scattered about. The deputy asked where the man's wife was and he said "they abducted her."

"(The man) stated that they used holograms to project signals on the walls to get him to do what they wanted and to communicate with each other," the report states.

A deputy found nothing in the trailer.

Meanwhile, the man contacted his wife. A sheriff's sergeant said he refers to the woman as his wife but she's actually his girlfriend.

The man and his wife/girlfriend said "intruders used holograms to trick them into thinking that they were in the house and then chased them to the aunt's trailer several lots down," the report states.

The property owner said the last time the sheriff's office was called they were smoking drugs, the man was in the road with a gun and the wife/girlfriend was "digging for gold" while sitting in the road.

The property owner said she planned to serve eviction notices "in the very near future."

A deputy searched the home again and told the man and his wife/girlfriend to stay inside. - TCPalm 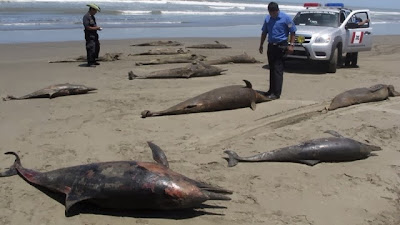 Authorities never established the cause of the deaths in 2012. They are doing autopsies on the latest dolphins found in the Lambayeque region on the northern coast.

Technician Jaime de la Cruz of Peru's Imarpe marine life agency said about 220 dead dolphins were found in the last week of January alone, the rest during the previous three weeks. Autopsy results were expected in two weeks. Examinations would focus on lungs, kidneys and livers.

Yuri Hooker, director of the marine biology unit at Cayetano Heredia University, told the Associated Press that in other parts of the world dolphin deaths generally were caused by environmental contamination when they ate fish or other smaller species filled with toxins. Hooker said others died after ingesting discarded plastic floating in the sea.

The marine biologist said determining the death of dolphins was complicated in Peru because government laboratories had only three or four of the world's 100 or so chemicals that could be used for determining an animal's cause of death. - Cosmos TV

A Houston man says paw prints along the Buffalo Bayou in the Memorial area are just one piece of evidence to prove he's spotted the mythical creature known as the Chupacabra. He says he also has the pictures to support his claim.

Scott Black's neighbor, David McKee, snapped several photos of the animal last Sunday in the back yard of the Doliver Point gated community, near Gessner and Doliver.

It was the third sighting of the animal in just the past 11 days.

"It had big, long, pointy ears. Long tail, had no fur," said Black, "but on its skin you could see splotches of gray and splotches of raw skin."

Black has seen the animal four times in all -- each instance right outside his back door.

After seeing the photos, a trapper from Ohio visited, then sent Black a cage to try and capture it.

Local 2 brought in animal control expert Claude Griffin to assess the situation. Griffin said while many will pass off the animal as a coyote, the physical characteristics appear to be a possible combination of several canine species -- from a coyote, to a domesticated breed, to a dingo.

Griffin said he's seen it before in the Houston area, which has a higher number of exotic pet owners than many people realize.

"People are actually inbreeding the animals and letting them go, and actually going out there and claiming that they're catching them," said Griffin. "So they are practicing the perfection of inbreeding." - Click 2 Houston