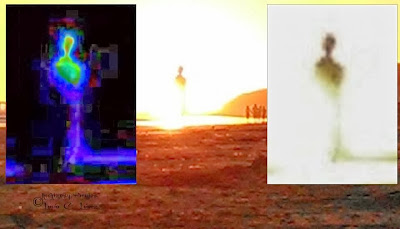 From Scott Corrales: We are still awaiting an official analysis from Luis Burgos and the FAO team on the nature of the alleged "Giant Humanoid" photograph taken on the beaches of Necochea.

In the meantime, Mundo Esotérico Paranormal (http://www.mundoesotericoparanormal.com/fotografia-muestra-humanoide-gigante-argentina/) had the following to say on its 10 December 2013 post, translated below:

Last year, media reported on a surprising photograph that appeared to show a transparent alien creature photographed by a police officer near [China's] Jianming Lake, located at an altitude of 3,313 meters in the southern part of the central plateau at Taitung.

A photo hoax was suspected at first until experts analyzed the photo to ascertain its authenticity. Their conclusion was that no further editing was in evidence. The snapshot was taken by Chan Yung-huang, a policeman walking around Lake Jianming with his colleagues on 14 May of last year. Chen said he noticed nothing unusual as he took a photo of a mountain. Later, the photograph would clearly show a large creature of extraterrestrial origin with a transparent body and webbed hands, which constituted proof of alien visitation to ufological experts. Now a new photograph in Argentina shows an extraterrestrial human on a beach. As occured in Lake Jianming, there were also witnesses who claimed seeing nothing unusual. Read more at Argentina: More on the "Giant Humanoid" Photograph

Dogs in Australia are becoming addicted to the hallucinogenic sweat that oozes off the backs of cane toads. Vets in Queensland have warned that some dogs are so desperate for a fix they deliberately hunt down the amphibians to stimulate the excretion of the deadly poison, then lick their prey. Like all addicts, the pooches are risking their lives for their cheap thrill. And with the wet season coming, and plenty of toads with it, dog owners are being warned it's time to have the illicit substances chat with their pets.

Jonathon Cochrane from the University of Queensland's School of Veterinary Science said there were some dogs he dubbed "serial lickers" who would be treated for cane toad poisoning a few times a year. "To say a dog or a cat is having an hallucination is impossible, but some do star gaze or track something across the room that isn't there and others just stare out of the cage while we're monitoring them," he said.

Cairns Veterinary Clinic Veterinarian Dallas McMillan warned patients in a recent newsletter of the risk of addiction. "Some dogs even seem to become seemingly addicted to the "high" from the toads,'' he wrote. "If your dog repeatedly gets poisoned by cane toads, you should consider keeping them inside, especially at night and when it is raining.''

Nikita Den Engelse, 27, of Hemmant, is a woman battling to free her best friend from addiction. Her two-and-a-half year old dachshund-shih tzu cross Wally is now in diversion therapy - also known as being kept inside - after two run-ins with toads and being found frothing and trembling. "The vet told me dogs will lick cane toads because it gives them hallucinations from it," Ms Den Engelse said. "I pretty much cried the whole time. I was thinking 'oh God'. I was concerned he was going to die," she said. - CourierMail

Cane toads: a tale of sugar, politics and flawed science

The Animal Book: A Collection of the Fastest, Fiercest, Toughest, Cleverest, Shyest--and Most Surprising--Animals on Earth

Alabama public health officials and school administrators with Etowah County are still unsure as to why a group of students and one teacher at one school were affected Thursday by respiratory problems.

However, they are continuing to look at the possible causes for the incident, which closed school not only at Hokes Bluff Middle School but also the adjoining elementary school.

Robbie Stubbs, emergency preparedness coordinator for the Alabama Department of Public Health, said 27 students and one teacher have sought medical care for the condition. Eight students are still in the hospital for observation, she said, and are in stable condition.

"We've been dealing with a lot of rumors," she said. For example, none of the students exhibited nausea or stomach problems. There have been reports of breathing problems and a skin rash, however.

The incident began sometime after 9 a.m. Thursday following a PE class with more than 50 students. At least two of the students have asthma, but about nine students began complaining of breathing problems, with symptoms variously described as hyperventilating, runny eyes and congestion. School administrators made the decision to evacuate the school and transport students to Hokes Bluff High School, just down the highway.

About an hour after the evacuation, rescue crews were called to the high school gym, where four students and an English teacher who had had no breathing problems at the middle school began exhibiting symptoms. They were transported to Gadsden Regional Medical Center, as had been the other nine students.

Etowah County Superintendent Alan Cosby said the middle school building has been checked out by state health officials and others. There has been no sign of a gas leak, and maintenance workers went over the school's heating and cooling system. An environmental services company is also checking out the campus, he said. On Thursday, workers checked for carbon monoxide, airborne toxins or other hazardous materials and found nothing.

At the moment, officials are awaiting other test results. Police tape was visible outside the building, as well as the gym. Hokes Bluff Middle has a campus built within the last five years, but its gym dates back to the 1960s.

Cosby said the school system may look at holding classes "in different venues" next week.

"We may work out a plan over the weekend," he said, saying Hokes Bluff Elementary will also be part of any plans. The system closed the elementary school, which is just next door, even though no students or teachers there exhibited any symptoms. "We'll notify everyone as early as possible. We're going to do everything we can to make sure that this school and its students are safe." - blog.al.com

Please allow me to rant. I cannot believe that SyFy cancelled 'The Haunted Collector' then opted for another season of 'Haunted Highway.' It is so blatantly fake, it's almost comical. The show reminds me of 'The Blair Witch Project'...screams, drama and fiction. Mere theatrics designed to entertain the viewer. At least they could bring Ozzy in for an episode...that may be fun.

I'm not saying that the paranormal / ghost reality show genre isn't more entertainment than substance. For the most part, all the shows have a level of disappointment that leaves actual investigators scratching their heads. But when we witness so-called 'paranormal experts' play to the cameras, well....you know what I mean.

I miss 'Destination Truth'...and have high hopes for 'Monsters & Mysteries in America.' Beyond that, there's not much to like...Lon