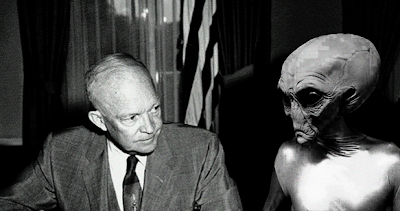 'Caretakers of the World'

2/21/1954 - unedited: When I was 19 years old I went on a hunting trip with my Uncle and his friend Roger in the Sierra Mountains at the Walker River area in California.

We were camping and I made a comment about how clear the sky was and if UFOs were real we would have a good chance of seeing one tonight.

My uncles friend Roger who worked as an engineer for Litton, said that UFOs were real. Back in 1953 or 1954 when he was working on a project for Litton at Edwards AFB, President Eisenhower flew in from Palm Springs one early afternoon. There were several dignitaries present with him for this meeting including some representatives from the Archdiocese of Los Angeles a couple of congressmen and military officers. They all went into a building. Roger asked an MP at the gate if he knew what was going on. The MP told Roger that there was a meeting going on between the group of dignitaries and people "not from this world". The beings had picked the United States because they had seen our atomic bomb. The MP told Roger that the people "not from this world" were negotiating a deal with the United States which was a trade for technology in exchange for the United States agreeing to become the "caretakers of the world". Later that afternoon the MP and Roger saw everyone including President Eisenhower come out of the building but never saw the "other worldly beings". They watched President Eisenhowers plane fly away. - MUFON CMS

Did Eisenhower Meet ET At Edwards AFB In The 50's?

As part of a plan to eradicate brown tree snakes, mice were dropped on Guam this week to provide a poisoned snack for the invasive species.

On Monday, teams in helicopters released about 2,000 dead mice laced with the common painkiller acetaminophen across the island in the latest attempt to rid the U.S. territory of the serpents.

Brown tree snakes are sensitive to acetaminophen: a single mouse laced with 80 milligrams of the stuff can kill one snake that eats it.

This is the fourth time scientists have dropped poisoned mice on Guam to combat the brown tree snake population. Last February, teams dumped mice laced with painkillers near the island's Andersen Air Force Base.

Brown tree snakes, which can grow more than 10 feet long, have disrupted power lines and knocked out electricity to buildings near the base. While their venom is not lethal to humans, the snakes have decimated other native populations on the island, including several bird species.

The snakes, native to the South Pacific, have plagued Guam since they were accidentally introduced to the island shortly after World War II, according to the U.S. Geological Survey. Dan Vice, a wildlife services biologist with the U.S. Department of Agriculture, estimates that there may be as many as 2 million snakes living on the island, the Pacific Daily News reported. - THP

Chula Vista, CA - 10/1/2013 - unedited: Hello my name is [Name removed/cms/tg]. My sister and her friends are the real witnesses to this. The sightings were in two different occasions. The first sigthing was when my 23 year old sister and her guy friend where relaxing in her car one day just hanging out and at the moment they got out of the car they describe seeing a white cylinder floating just above them. She describes it as being like a floating cigarette. It hovered away behind some hills and they lost sight of it. The second encounter was at night when supposedly my sisters friend and his younger brother (who are also her neighbors) heard some strange screams outside their house. You really cant see anything back there at night. There is nothing but hills and mountains behind those houses.

Anyways they went out with a pellet gun and a flashlight to check out what the noises were? then suddely they enconunterd what they describe as being two huge bigfoot type creatures standing infront of them but at a near distance. Supposedly they shot at them with the pellet gun but they say the creatures didnt even flinch. So they ran back scared to their house. After that he went directly with my sister to tell her the story. Thats all I know. I trust my sister and she wouldnt make up a story like this. Im gonna do a bit more of investigating on what these guys actually saw. but please do keep record of this. We appreciate you guys being here. Not to many people will believe a strange story like this. Thanks you. - MUFON CMS

Fantastic interview with cryptozoologist / author Lyle Blackburn - 'Lizard Man: The True Story of the Bishopville Monster' - Click here to listen to the show

Video - ENGLAND`S MOST HAUNTED VILLAGE - A DAY AND NIGHT INVESTIGATION OF PLUCKLEY, KENT

Does remodeling stir up spirits?

The Mystery of Dimes Appearing From Nowhere and Other Strange Phenomenon