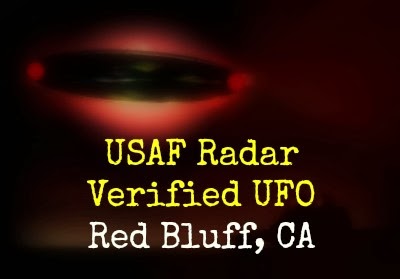 On August 13, 1960 two CHP officers were on patrol near Corning, CA when they witnessed what they thought was an airliner about to crash. When the UFO had descended to about 100 or 200 feet altitude it suddenly reversed direction and climbed to 500 ft. The object was described as round or oblong surrounded by a glow and having definite red lights at each end.

California Highway Patrol Officers Charles A. Carson and Stanley Scott were on duty on Hoag Road, east of Corning, California when they saw what looked like a huge airliner descending from the sky in front of them. Thinking that a plane was about to crash, they stopped and got out of the car to get a better look. They watched as the object descended in complete silence to about 100 to 200 feet from the ground, then suddenly reversed and climbed back to about 500 feet from the ground and stopped. Officer Carson described it in a police teletype report:

At this time it was clearly visible to both of us. It was surrounded by a glow making the round or oblong object visible. At each end, or each side of the object, there were definite red lights. At times about five white lights were visible between the red lights. As we watched the object moved again and performed aerial feats that were actually unbelievable.

The officers radioed the Tehama County Sheriff's Office and asked Deputy Clarence Fry to contact the local USAF radar station at Red Bluff. Deputy Fry reported back that the radar station verified that an unidentified object was visible on radar.

The object then began to move slowly to the east, and the officers followed. When they had reached the Vina Plains Fire Station, the object was approached by a second object that came from the south. The second object moved near to the first and both stopped and hovered for some time, occasionally emitting red beams. After a time, both objects vanished below the eastern horizon. They had observed the first object for a total of about two hours and fifteen minutes.

When they returned to the Tehama County Sheriff's Office, they found that the object had also been seen by Deputies Fry and Montgomery, as well as by the night jailer. All described the same thing.

The next day, Officers Carson and Scott drove to the Red Bluff Air Station to discuss the sighting and to speak to the operator that had seen it on radar. The Air Force, however, now denied that the object had been seen on radar, contradicting what the radar operator had told Deputy Fry the night before. The visit was completely unproductive.
More information regarding the sighting was obtained by NICAP(National Investigations Committee on Aerial Phenomena) advisor Walter N. Webb, who contacted Carson and received a copy of the report, drawings of the object, and a letter from Carson.

We made several attempts to follow it, or I should say get closer to it, but the object seemed aware of us and we were more successful remaining motionless and allow it to approach us, which it did on several occasions.

In the original report, Carson also mentioned that:

Each time the object neared us, we experienced radio interference.

Again, from the letter to Webb:

The object was shaped like a football, the edges, or I should say outside of the object were clear to us...[the] glow was emitted by the object, was not a reflection of other lights.

What was the "official" explanation for the sighting? In a letter to a NICAP member, the Air Force said: The findings [are] that the individuals concerned witnessed a refraction of the planet Mars and the bright stars Aldebaran and Betelgeux. . . [temperature inversions] contributed to the phenomena as the planet Mars was quite low in the skies and the inversion caused it to be projected upward.

A contributing factor to the sightings could have been the layer of smoke which hung over the area in a thin stratiform layer. This smoke came from the forest fires in the area hung in layer due to the stable conditions associated with the inversions.

Officer Carson had this to say about the Air Force explanations:

...I have been told we saw Northern lights, a weather balloon, and now refractions.
…I served 4 years with the Air Force, I believe I am familiar with the Northern lights, also weather balloons. Officer Scott served as a paratrooper during the Korean Conflict. Both of us are aware of the tricks light can play on the eyes during darkness. We were aware of this at the time. Our observations and estimations of speed, size, etc. came from aligning the object with fixed objects on the horizon. I agree we find it difficult to believe what we were watching, but no one will ever convince us that we were witnessing a refraction of light.

A check of the meteorological records of the area for that night by atmospheric physicist James E. MacDonald failed to find any evidence that would indicate the presence of a temperature inversion.

Over the next week, similar sightings were reported, including another sighting the very next evening by Deputies Fry and Montgomery that was also seen by a Corning police officer. - Loy Lawhon - 'The Red Bluff Refraction' 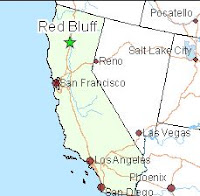 I have interviewed one of the two California Highway Patrolmen who were the principal witnesses and have spoken with two other persons who were involved in the incident. CHP officers C.A. Carson and S. Scott, driving east at 2300 hours on a back road south of Red Bluff, suddenly sighted what they first took to be an aircraft about to crash just ahead of them. Pulling their patrol car to a rapid stop and jumping out to be ready to render whatever assistance they could, they were astonished to see the long metallic looking object abruptly reverse its initial steep descent, climb back up to several hundred feet altitude, and then hover motionless. Next, it came silently towards them until, as Officer Carson put it to me, "it was within easy pistol range". They had their pistols ready and were debating whether to fire when it stopped. Attempts to radio back to the nearest dispatcher failed due to strong radio interference, which recurred each time the object came close to them during the remainder of this 2 hour long sighting.

Huge bright lights at either end of the object swept the area. Carson stated to me that one light was about six feet in diameter; other smaller lights were also discernible on the object. After some initial minutes of hovering only 100 to 200 feet away from them and at about the same distance above the ground, the object started moving eastward away from them. They then contacted the Tehama County Sheriff's office that handled their night dispatching work, and asked for additional cars and for a check with Red Bluff Air Force Radar Station. Then they began to follow the object.

The full account is too involved to relate here, but it is important to point out that a number of witnesses confirmed the object from various viewing points in the county. A call to the AF radar unit brought confirmation that they were tracking an unknown moving in the manner reported by Carson and Scott.

However, when Carson and Scott went the following day to talk with personnel at the Red Bluff radar base, they were informed that no such radar sighting had been made. Their request to the officer in charge to speak with the radarman on duty at the time of the incident was denied. The Bluebook explanation that came out after a few days attributed this very detailed, close range sighting of a large object, seen by two experienced officers to "refraction of the planet Mars and the two bright stars Aldebaran and Betelgeuse" 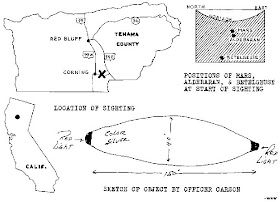 NICAP referred the question to one of their astronomical advisors, who found that none of these three celestial objects were even in the California skies at that time. Bluebook then changed the explanation to read Mars and Capella. Capella, the only one of those celestial bodies that was even in the sky at 2300, was nowhere near the location of the sighted object, and could not, of course, give the impression of the various movements clearly described by the officers.

Carson subsequently stated, "No one will ever convince us that we were witnessing a refraction of light." Carson remarked wryly to me on the Bluebook explanations, "I'd sure hate to take one of my cases into court with such weak arguments." Dr. Menzel concurs with the Air Force explanations and speaks of this being a night of "fantastic multiple inversions of temperature and humidity", such that he would have expected many more reports of UFOs. I should like to know what radiosonde data Dr. Menzel is citing, since the data I obtained does not fit that description.

Any such casual putting aside of the details of the basic report has no scientific justification in the first place. If Menzel and Bluebook think California Highway Patrolmen draw their .44s in uneasiness over looking at a refracted image of Capella, and misinterpret it as a 100 foot object with huge bright lights, I am afraid I cannot share their readiness to so easily discredit and discount reliable witnesses. When I spoke with Carson a few months ago, I found him still deeply impressed by this incident six years after it occurred. "I've never seen anything like it before or since." - Dr. James E. McDonald

NOTE: there have been several incidents in the Red Bluff, CA area, including those at the following link: WHY IS RED BLUFF SUCH A HOT SPOT FOR UFO/CATTLE MUTILATION ACTIVITY?...Lon