The Hubble Space Telescope has photographed an asteroid unlike anything ever seen before.

Described as "weird and freakish", the object designated P/2013 P5 is said to have left astronomers lost for words. With a rotation likened to that of a lawn sprinkler, the asteroid appears to have six tails, the first time such a phenomenon has ever been witnessed.

Originally spotted by the Pan-STARRS survey telescope in Hawaii, the object was observed more closely by the Hubble Space Telescope on September 10th. When the team photographed it again two weeks later however it had completely changed its appearance.

"We were literally dumbfounded when we saw it," said lead project investigator David Jewitt. "Even more amazing, its tail structures change dramatically in just 13 days as it belches out dust. That also caught us by surprise. It's hard to believe we're looking at an asteroid."

Astronomers believe that what is being observed is a 'dying' asteroid that's rotational force will eventually tear it apart, ejecting dust and rock out in to space until there is barely anything left. Read more at Independent

The Cancellation of 'Haunted Collector'

Demonologist John Zaffis said recently that his television show 'Haunted Collector' won't be returning for another season on Syfy. Zaffis tweeted "hi all just letting you know haunted collector will not be coming back sorry to all our fans" on October 30.

Even though all reality television presentations have a bit of hokiness and less-than-real entertainment, I must say that 'Haunted Collector' came as close to actual investigating than any other paranormal TV show. I believe that John Zaffis' insistance of a more realistic production doomed his show.

I realize it's a business and rating / selling advertisements are the key...but I don't blame that on John and his team. SyFy's promotion of 'Haunted Collector' was a bit lame this past season and I feel that the 'handwriting was on the wall.'

I truly hope the production can somehow be picked up by another network. John Zaffis and his team have my full support. Lon

Ariana Grande, the 20-year-old your daughter/niece/teenybopper neighbor adores, graces the cover of Complex magazine's December 2013/January 2014 issue. And in the interview, she described an unusual encounter with the supernatural:

I've had a ghost/demon experience. We were in Kansas City a few weeks ago and went to this haunted castle and were so excited. The next night we wanted to go to Stull Cemetery, which is known as one of the seven gates to hell on Earth.

I felt this sick, overwhelming feeling of negativity over the whole car and we smelled sulfur, which is the sign of a demon, and there was a fly in the car randomly, which is another sign of a demon. I was like, “This is scary, let’s leave.” I rolled down the window before we left and said, “We apologize. We didn't mean to disrupt your peace.” Then I took a picture and there are three super distinct faces in the picture -- they’re faces of textbook demons.

I was going to sleep about two weeks ago. I had just gotten off the phone and as soon as I closed my eyes I heard this really loud rumble right by my head. When I opened my eyes it stopped immediately, but when I closed my eyes it started again with whispers. Every time I closed my eyes I started seeing these really disturbing images with, like, red shapes. Then I opened my eyes and got back on the phone and was like, “I’m really scared and I don't want to go to bed tonight.” And then I scooched over to the left side of my bed, because that’s where the best service is in my room, and there was this massive black matter.

It was like a cloud of something black right next to me. I started crying. I was on the phone like, “What do I do, what do I do?” and they said, “Tell it to eff off.” I thought, I'm not going to do that. It’s going to upset it, so I'm just going to chill and not feed into it because all it wants is fear. It feeds on fear. I watched it move to the front of my bed and then I fell asleep on the phone. I woke up and it was gone. 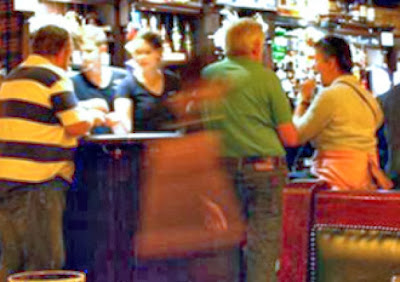 Ghost of White Hart Inn been caught on camera?

IT is believed to be Edinburgh’s most haunted pub, with more spooky spectres than there are spirits behind the bar.

Now staff at the Grassmarket’s White Hart Inn have what they believe is a photo of a troublemaking ghost, captured by a family of Australian  tourists.

It shows what staff claim is a ghostly female apparition near the venue’s main bar.

The spooky snap is believed to be a girl in a red dress who haunts the bar, a spectral hand visible at her side.

Such has been the  excitement over the image, a ghost-chasing film crew has asked to spend a night locked inside the pub in a bid to capture unmistakable proof of the afterlife on camera.

Inn manager Michael Johnson, a self-proclaimed sceptic, said the couple’s daughter took the holiday snap about eight weeks ago on a night out.

Mr Johnson said he remembers the night well as he had been giving the pleasant couple “jip about the rugby”.

He said: “They were about the second last group to leave and they pulled on my shirt and said ‘look at this’.

“They’d looked through the photos and seen something a bit strange. She pulled it up on us and that’s when I knew it wasn’t a hoax. She couldn’t have done any computer graphics because she was still in the pub.”

Mr Johnson said research carried out since the photo’s discovery had uncovered an unverified drawing of a prostitute dressed in red who is believed to have frequented the pub during the 1800s and been killed on the premises.

The White Hart Inn is central Edinburgh’s oldest pub, with the cellar dating back to 1516.

Poet Robert Burns is rumoured to have stayed there on his final visit to the Capital in 1791.

According to popular myth, Edinburgh’s notorious murdering duo William Burke and William Hare are supposed to have enticed several fellow drinkers away from the old pub to kill them at their nearby lodgings before selling the corpses.

Mr Johnson said of  unexplained happenings at the inn: “A girl claimed her hair got pulled while she was changing a barrel. We’ve had a chutney bottle thrown at one of the staff. Two of the girls were working one night and the music stopped. They went downstairs and all the wires had been pulled out.

“We had a guy that came and did an audit and he could hear barrels moving. We’ve also had complaints about people being downstairs counting money and they could hear people walking upstairs despite the pub being shut.”

Mr Connor said: “Because of where it’s come from with the elderly couple and them being blasé about it, it’s obviously not something that’s been done through Photoshop.

“The most striking thing about the picture is how vibrant it is.

“With the hand being there, we’ve enlarged that and we can’t see any manipulation.” - EdinburghNews

The Ghost That Haunted Itself: The Story of the McKenzie Poltergeist

Entities causing me to pass out!

Colorado Springs, CO - unedited: I need help with this, this is not the first time I have dealings with entitys, I have had it with this problem and need help.

please not that this is the second time I have met these beings: I had just gotten in my bed (its about 2-3 feet from the ceiling in my room) and I feel like I am having a heart attack, I had a strong feeling of some one in my room and (from a laying position I roll over and place my arms flat on my pillow so I can see over the head of my bed) I look over and I see a 7 or 8 foot tall being, he/she is extremely dark and I cannot see ANY detail but a total of a black silhouette. it had never moved or touched me this time, it just stared at me. I have about a second of eye contact and I unexpectedly, and like a rag doll, pass out and crumple in my bed. I wake up late in the morning only because my dad had shaken me till I had become conscious. I lost sight of the being because I was unconscious, I have seen it/one of them before and I had not passed out on eye contact. after this I feel completely powerless and in need of help.

I need help, please call me and my dad, i have experienced events previous to this and after, this is just one of the 4 or so events i have dealt with, please, im tired of the stress. - MUFON CMS

Video: Duxford - An Ancient Church Trapped in the Middle Ages

The Wild Kids of Woolpit

The Chakra Bible: The Definitive Guide to Chakra Energy